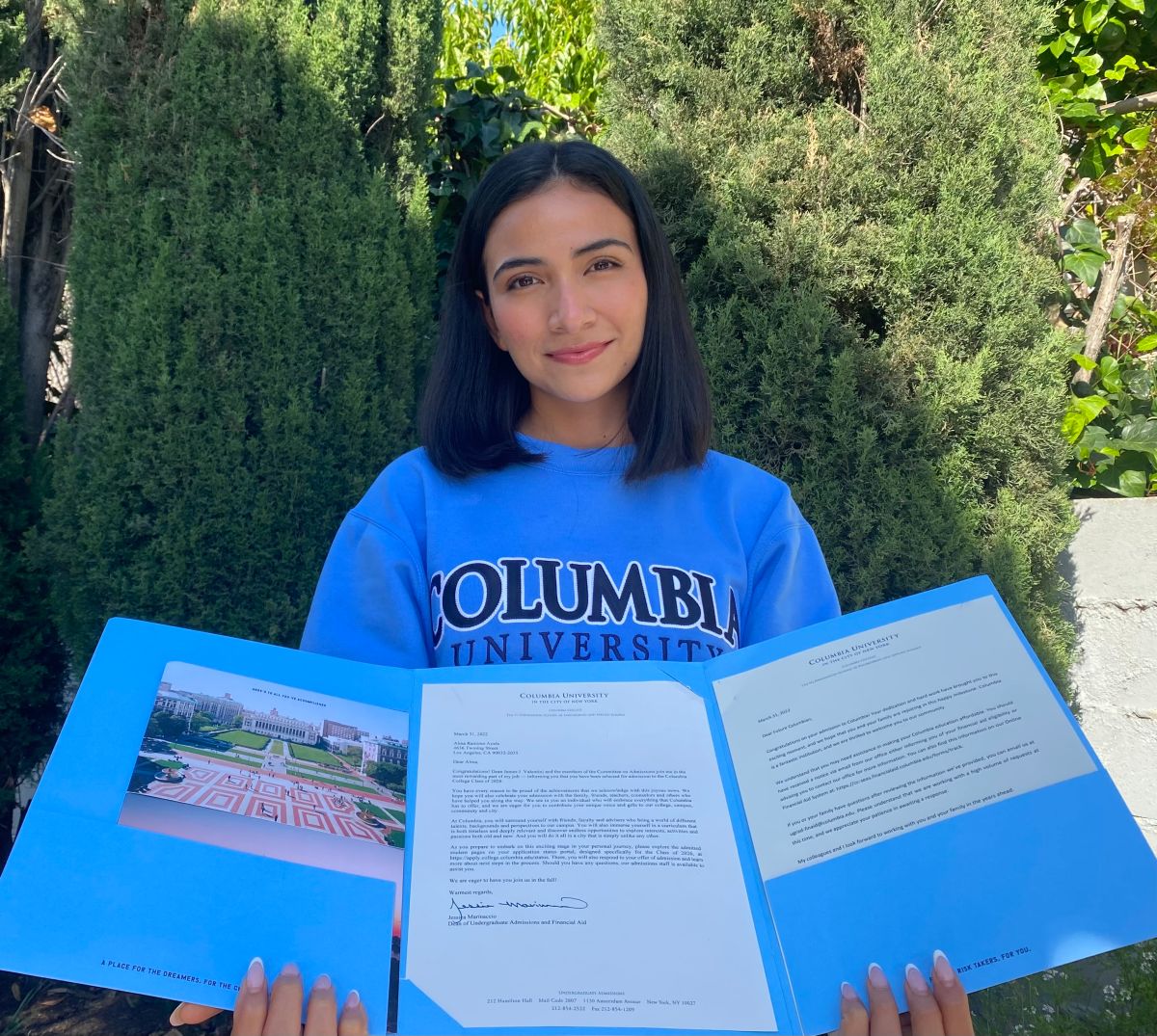 Last year while Alma Ramírez was filling out her university applications, her mother, Alma Ayala, was in charge of giving her recommendations in her personal essays.

“I translated what she said and she corrected me,” said the young woman of Honduran nationality.

The teamwork paid off as Ramírez recently began receiving acceptance letters; 11 of 15 colleges he applied to were accepted. Among them the most prestigious universities such as Cornell and Columbia in New York and USC in Los Angeles.

This is a great achievement for the student who emigrated to the United States six years ago with her mother and older brother. Ayala made the difficult decision to leave her native Honduras to meet with her mother, who had arranged her immigration status for them.

Ramírez said that in Honduras, despite the fact that her mother worked as the director of a kindergarten, the salary was not enough and at night she had to make pilones—ice cream popsicles—to sell.

The transition to Los Angeles was difficult. Ramírez entered grade 7 and language was one of the biggest obstacles to face.

“I had to change my brain and start practicing and speaking English,” said the teenager who had the very basic knowledge of English that she was learning in Honduras.

Another thing that surprised Ramírez is that his mother, who has a university degree in Honduras, found that she was worthless in the United States.

“So since we arrived she has had to work earning the minimum as in packers. Seeing these things has motivated me to get ahead and maybe help her in the future,” said the young woman who lives in El Sereno.

Driving interest in your career

The student began to excel in her classes and by 10th grade she decided to take architecture classes through a program called Dual Enrollment.

These count as college credits. She took the equivalent of six classes and additionally earned three skills certifications.

Studying architecture at a very young age caught his attention to the point that he decided that this would be his career.

As early as 12th grade when it was time to fill out applications, Ramírez was hesitant to apply to prestigious private schools—known in English as Ivy League—because she didn’t feel fit to get there. There are eight Ivy League universities in the United States and they are considered the most prominent and most sought after in terms of acceptance and graduation.

Ramírez steeled himself and with the support of his mother and grandmother decided to apply to two of them, Cornell and Columbia, both in New York.

“All my friends wanted me to open the emails to see the results of the Ivy League universities, but I had told them not until I got home so I could open them with my mother and grandmother,” said the young woman.

Once home, she opened the mail and the trio of women was surprised to learn that Ramírez was accepted to both universities. Columbia has an acceptance level of 5% and Cornell with 11%.

“My mom and I started crying and we didn’t believe it,” the student said.

Ramírez decided on Columbia and said that he applied to enter the architecture program since the university has one of the best programs for this career.

Additionally, Ramírez was awarded grants and scholarships totaling $81,000 for the first year. The cost per year is estimated to be more than $82,000.

Mrs. Ayala said that she is very proud to see all her daughter’s achievements since she had to put aside her own to give a better future to her two sons, Ramírez and an older brother.

“I worked at the packing company and I cried but I also knew it was going to be worth it,” said Ayala, who was not mistaken.

On spring break mother and daughter went to visit the university in person.

“When I got there I felt at home, it was a very nice experience and not only was I able to see the school but I was also able to meet my classmates who were also accepted this year,” said Ramírez.

Earlier this year, Ramírez’s grandmother was diagnosed with colon cancer and her mother was forced to leave her job to care for her. The progress of her disease does not allow her to do many things on her own.

“My grandmother was one of the people who helped bring us here and that is another reason why I try to do much better at school to thank her,” said Ramírez, unable to hold back tears. “I think about the future and what I can give my family with my college education and being able to earn more than the minimum.”

Ramírez said it will be a little painful to be away from her mother and grandmother, but she knows it will be worth the effort.

Additionally, she said that she continues to advocate for higher education for immigrant students and English learners.

“I have realized that some of them come with the disadvantage that they did not learn English in their countries and here they do not have the necessary support,” said the young woman.

He recommended to all who want to get a university degree not to fear and fight for their dreams.

“Anything they want they can do. Don’t let the barriers stop you,” stressed the young woman.