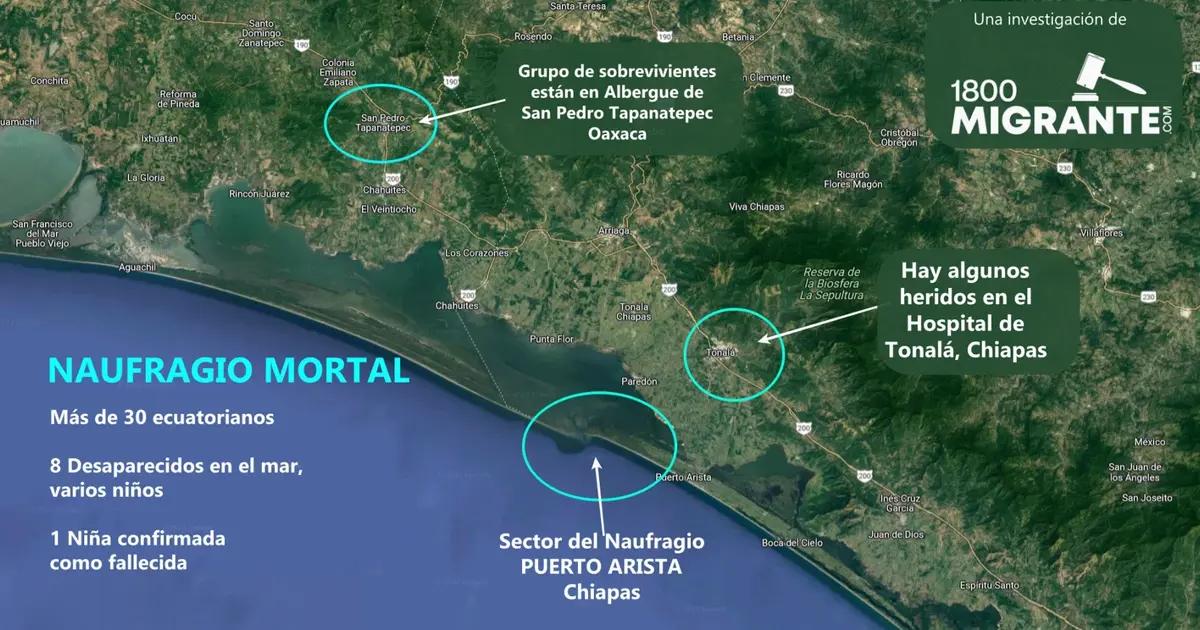 The organization 1800 Migrante, which provides accompaniment and legal advice to migrants, has reported that a boat with 30 passengers was shipwrecked on the state border between Chiapas and Oaxaca, Mexico. There are seven Ecuadorians dead, and the death of a 9-year-old Ecuadorian girl has been confirmed.

This new tragedy adds to the recurrent reports of accidents in which the main victims are irregular migrants seeking to reach the United States.

According to information provided by 1800 Migrante, which is following up on the case, 21 Ecuadorians and 9 Cubans were being transported in the boat. Among the missing are four children between 4 and 9 years old, a 16-year-old adolescent, a 27-year-old woman, and a 31-year-old man.

Luis Ilvis, an Ecuadorian who arrived in the United States ten months ago, spoke to El Universo and told El Universo that in the shipwreck, “my wife, a son, and two brothers were saved, along with other Ecuadorians, because they were able to grab onto a gallon of gasoline that was floating, but one daughter drowned and another is missing.”

The Ilvis family is originally from Quito, according to the local newspaper. Six members, including four minors, embarked on the journey to the United States on October 27. Still, on November 18, the misfortune came: “They did it on foot, crossing Colombia, the Darien Strait, and all of Central America until they reached Chiapas.”

Daniela Ilvis, age 9, drowned in the wreck. Irene Guaña, five years old, is missing. Both belong to the same family.

“The shipwreck occurred around two in the morning. They held on to that plastic container for several hours until some fishermen helped them to disembark on some islets. Then they found my daughter’s body, but it was already swelling and bubbling from the mouth and eyes, they wanted to take her, but they could not because she began to decompose. They had to leave my daughter buried and thrown who knows where,” said the father of Daniela Ilvis to El Universo.

The spokesperson for 1800 Migrante, William Murillo, has made a public statement requesting the Chiapas Prosecutor’s Office to initiate procedures to find the Ecuadorians who disappeared in the shipwreck.

The Ministry of Foreign Affairs and Human Mobility of Ecuador issued a statement indicating that Ecuadorian authorities have contacted the relatives of the migrants who were victims of the shipwreck. The institution indicated that “as of Sunday afternoon, there is no official information from the Mexican authorities, so they are working on the relatives in Ecuador to provide information about the criminal structures that transferred their loved ones.”

The institution has warned that the relatives of the migrants who experienced the shipwreck have been threatened so that they do not provide information about who took their relatives on such a risky journey and pointed out that: “It is strange that companies that do business with migrants promulgate information about crimes related to human trafficking. We have warned U.S. authorities to initiate an investigation into some phone numbers and social media accounts dedicated to supposedly assisting migrants“.

In October of this year, Infobae warned in a report about Ecuadorian human traffickers promoting “safe trips” for irregular migrants to the United States on TikTok. Coyotes charge between US$5,000 and US$20,000 and expose family groups, who now travel more frequently, to extremely risky routes, such as the Darien jungle, and to poor conditions to reach the United States irregularly.

According to data from the Ministry of the Interior, in August of this year alone, 12,252 Ecuadorians left the country through this border area, where they only need to present an identification document to cross into Colombia.

In a conversation with Infobae, counselor Marcelo Hurtado, director of Protection of Ecuadorians Abroad of the Ministry of Foreign Affairs and Human Mobility of Ecuador, said that this type of migration is risky because the economic, physical, and psychological costs of entering the United States irregularly are high: “there are risks to one’s integrity, to life… There are frequent deaths due to traffic accidents (of trucks transporting migrants)…. There are crimes to the physical integrity and the monumental psychic risk of everything they go through and see”.