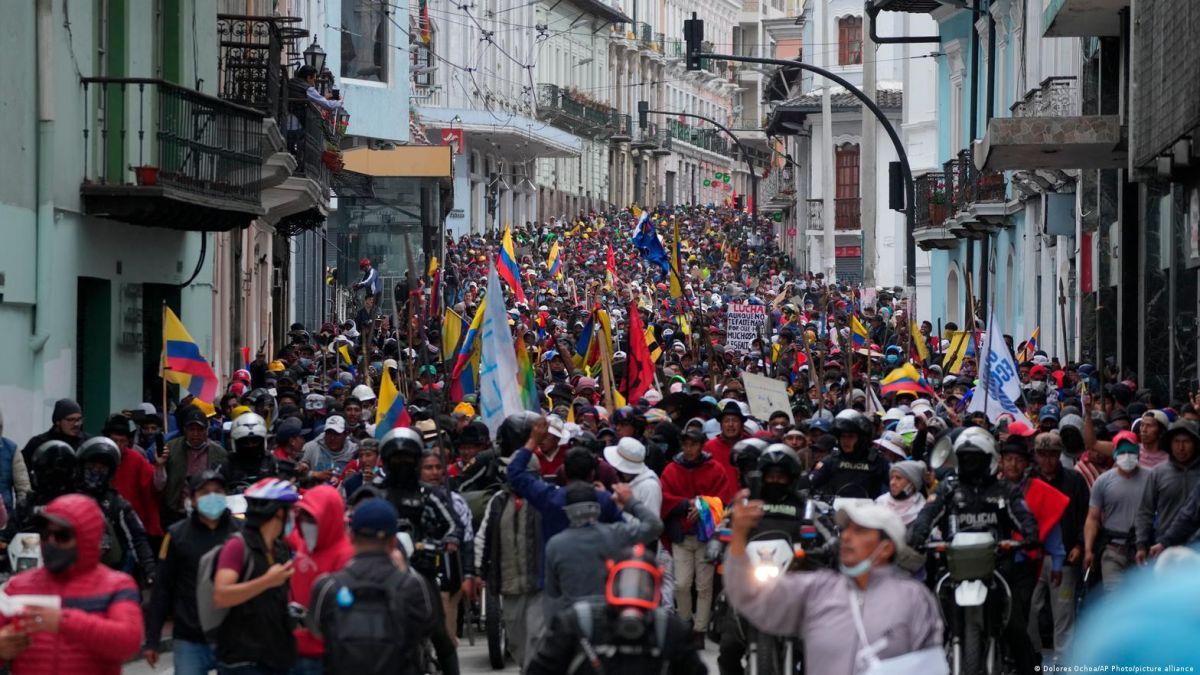 A loud cacerolazo was heard this Wednesday night (06.22.2022) for several minutes in different neighborhoods of Quito to demand the start of a dialogue that ends the protests against the Government of President Guillermo Lasso, which have almost completely paralyzed the city for the second consecutive day.

The metallic noise of the pots being hit from numerous houses ended the tenth day of the mobilization called since June 13 by the Confederation of Indigenous Nationalities of Ecuador (Conaie), along with other organizations that have concentrated the demonstrations in Quito.

The cacerolazo was encouraged by the mayor of Quito, Santiago Guarderas, one of the figures who has most insisted in recent days on holding a dialogue between the Government and Conaie to resolve the list of ten demands of the indigenous movement.

#VIDEO | in several sectors #Quito the so-called ‘cacerolazo’ is carried out as a request for the violence to stop and dialogue to begin. » https://t.co/kfOpNz4A36 pic.twitter.com/Z2wbFtc4EG

Meanwhile, the 18 police officers, whose “disappearance” was reported early on Wednesday, were found hours later and are in good condition, authorities reported.

The general commander of the National Police of Ecuador, Fausto Salinas, indicated in his balance of the day that they asked the International Red Cross to make the respective approaches to the communities and to verify that two agents who were still being held were in good condition. , and then proceed to his release.

The two agents were held Tuesday night during the violent events that took place in Puyo, capital of the Amazonian province of Pastaza, in which a mob set fire to a bank office and also a police station, where eighteen vehicles were burned.

Meanwhile, in different places in Quito, the blows of pots calling for peace were heard on Wednesday night, reported the local newspaper El Comercio.

“With this action the citizens ask for the cessation of the national strike. Users on social networks believe that the Government and Conaie should agree to a dialogue as soon as possible,” added El Comercio.
The protests against the government of the conservative Lasso began on June 13 and continue this Wednesday concentrated in several cities, mainly in the capital, Quito, after leaving so far a balance of two deceased protesters and no less than a hundred injured.

The indigenous movement refuses for now to dialogue with the Government until the state of emergency decreed in six provinces to stop the protests ceases, the House of Ecuadorian Culture is freed from security forces to establish a popular assembly and compliance is guaranteed. of your statement of demands.

Summoned by the powerful Confederation of Indigenous Nationalities (Conaie), the protesters demand the reduction of the price of fuel, the suspension of mining and oil concessions in native territories, the control of the price of agricultural products and the commitment that state companies will not be privatized, among others.