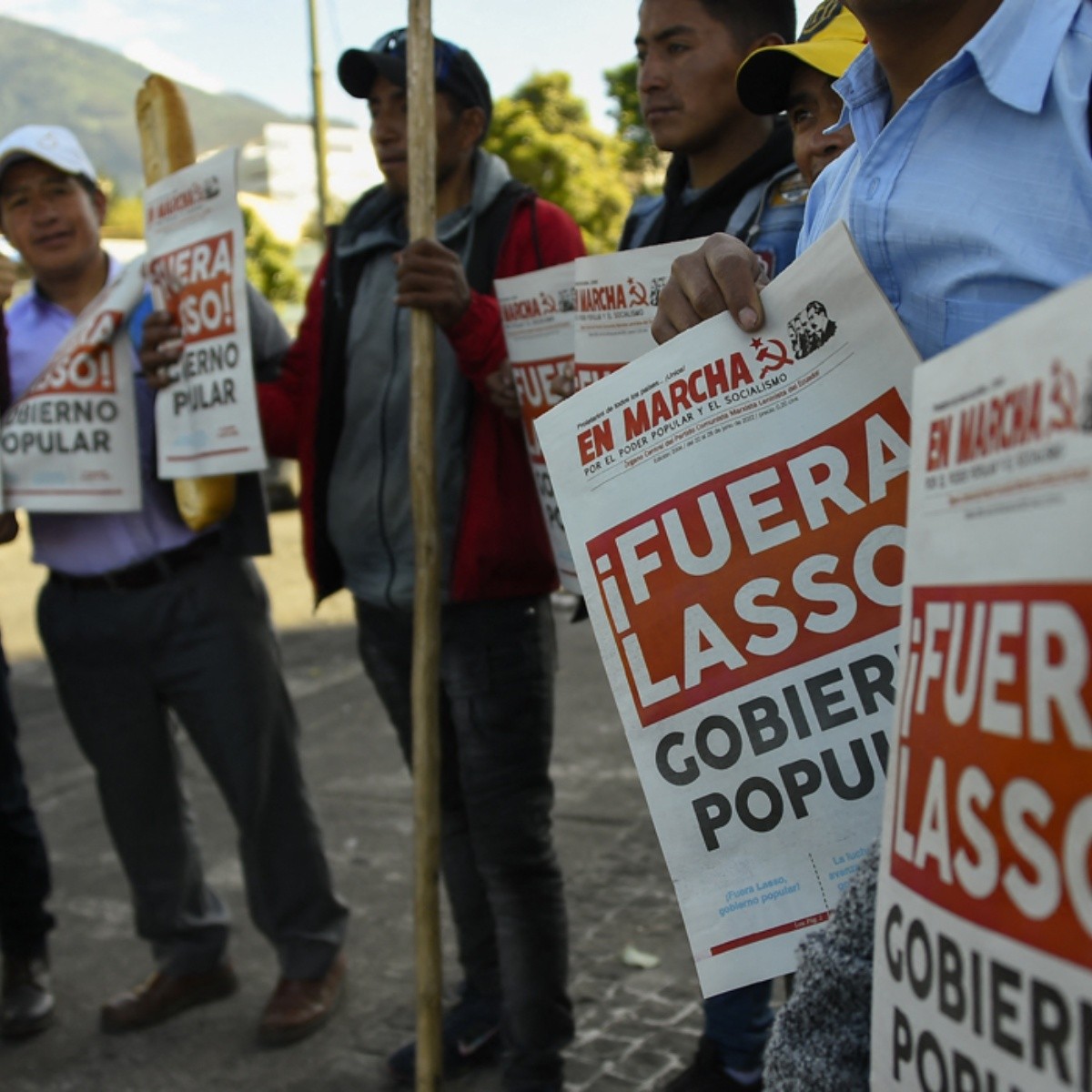 In its wake, the streets empty and shops close. Thousands of indigenous people from far away advance on an exhausted and militarized Quitowilling to stay until the government gives in to their claims or falls.

The demonstrators regain strength at night, housed in two universities, and before noon they disperse in groups. They carry sticks, handmade shields and whipalas, the multicolored flag of the native peoples of the Andes.

In the columns of outraged red ponchos stand out. They leave behind barricades with burnt logs and tires, and bonfires in broad daylight. A sector of the north of the city begins to paralyze.

“It could be a month, it could be two months (…) The war will come, but here we are going to fight until” removing the president, shouts María Vega (47 years old) who survives doing various jobs.

When the combined forces of soldiers and police halt their march, they change course. Access to the presidential headquarters is blocked with metal fences, razor wire and pickets by uniformed men.

President Guillermo Lasso, a former conservative banker with a year in power, sees in the revolt an attempt to overthrow him, not in vain the country gained a reputation for ungovernability after the abrupt departure of three presidents between 1997 and 2005 due to pressure from the indigenous .

But neither the military deployment, nor the curfew, nor the insults of those affected by paralysis, deter them. The natives defy the state of emergency under the nose of the government, which has forced the military out of the barracks to try to regain control.

“They have weapons. How are you going to compare a weapon with a stick or a stone? They cannot put us on an equal footing,” Luzmila Zamora (51) told AFP.

It has been 11 days since the indigenous people left their rural communities, but only until Monday did they arrive in Quito with a common complaint: the high cost of living. They want the government to decree a reduction in fuel prices, among other measures to alleviate the increase in the family basket.

“We want a government that works for the people, for the whole of Ecuador, not just for the upper class,” Zamora claims.

At the forefront of the protests, in which two demonstrators have died and dozens of wounded among uniformed and indigenous people, is the Confederation of Indigenous Nationalities of Ecuador (Conaie).

The leader of the organization, Leonidas Iza, appears in the crowd with a megaphone in hand to reaffirm his willingness to have a conditioned dialogue, but not without first questioning Lasso.

“Do we have answers, comrades?” he asks. “Nooooo!”, hundreds of indigenous people around him respond.

At another point in the demonstration, Marco Vinicio Morales, a 40-year-old evangelical pastor, does not understand how a country “with large-scale oil, gold and silver production” is suffering from “the high cost of living.” So “if there is no response, Lasso himself is going to dig the grave and must be removed,” he remarks.

In addition to the fuel issue, Conaie calls for a one-year moratorium on bank loans and a price control policy against speculation and the depressed food market.

“The costs of chemicals are so high that farmers have to work at a loss,” summarizes the indigenous Zamora.

Other claims such as a larger budget for health and education are added to the range of claims.

But the mobilization also impacts the merchants and employees of Quito, who are trying to recover after the severe crisis caused by the pandemic.

In 2019 the Indians advanced on Quito for the government of the time to withdraw from an agreement with the IMF that, in practice, eliminated millionaire fuel subsidies.

After almost two weeks they achieved their goal, but left a trail of resentment among the middle and upper classes. Buried for some time, racism surfaced with a high dose of rage.

Then 11 demonstrators were killed and a thousand wounded throughout the country.

Efrén Carrión, a 42-year-old chef, is already feeling the impact. “From Monday to Friday they sold 120 lunches a day and these days it’s 10 or 25 maximum,” he says.

and regrets that cause of tear gas “customers run away without paying”. “The best revolution is to work and reach an agreement, dialogue, the people are not to blame for this,” he comments.

The protests emptied downtown buildings. “Hearings have been suspended and if there are no hearings they don’t pay. They have scared the clients away,” claims the lawyer Hugo Castro (55).

The indigenous people know well the discomfort they cause. “They insult us, they tell us that we are lazy, that we let them work, but they don’t have needs, they don’t understand,” says Diana Segovia (32), an itinerant clothing merchant.

The fire of discontent continues to burn in Quito without knowing how long it will take to extinguish.