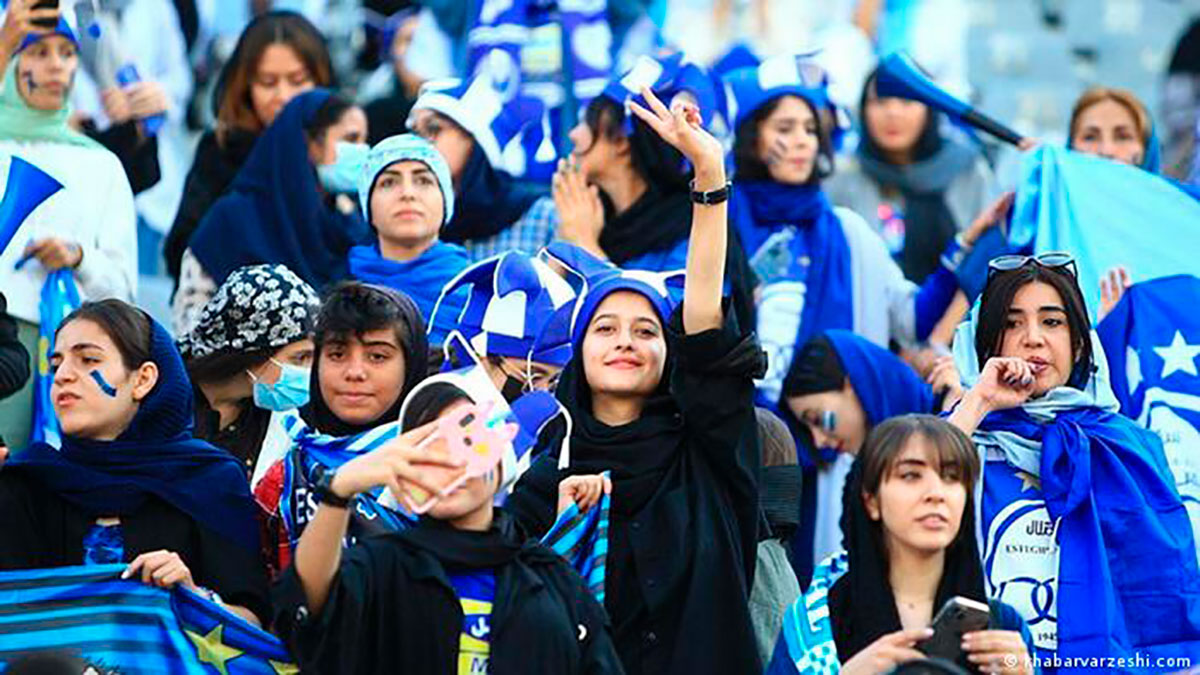 They wear blue and white caps, carry the flag of their club, Esteghlal Tehran, and some have painted the number of their favorite players on their cheeks. Even before the match between Esteghlal and Mess Kerman starts, the fans are in a good mood. It is the first time in more than 40 years that women are allowed to attend a football match.

A spokesman for the Iranian Sports Ministry announced on Wednesday (08.24.2022) that around 28,000 tickets were available for women.

However, only 500 women were able to buy their tickets in the end, as the Iranian leadership had to pre-select which of them could buy tickets first. Others, like Sarah (not her real name), an Esteghlal supporter and part of OpenStadiums, a group that campaigns for better access to women’s sporting events in Iran, had no chance of getting a ticket. “I feel jealous and sad because I couldn’t buy tickets. Very few were sold. And many of them have been handed over to relatives.”

Sahar Khodayari also loved football especially his club Esteghlal Tehran. In 2019, the then 29-year-old dressed up as a man and snuck into the Iranian capital’s Azadi Stadium, wearing a long coat and a wig. Women could not enter the stadium at that time because those who govern considered it a sin to see half-naked men. As a result, Khodayari was arrested and charged with “violating the law of chastity, immoral behavior and insulting law enforcement.”

Once released, Khodayari stood in front of Tehran’s Revolutionary Court, doused himself with gasoline and set himself on fire. The regime prohibited a funeral, as well as reporting on the case. Khodayari’s story went viral on social media and due to Esteghlal Tehran’s club colors she became known as the ‘Blue Girl’. She became a symbol of protest. FIFA also responded, stating at the time: “We call again on the Iranian authorities to guarantee the freedom and safety of all women involved in this legitimate fight to end the ban on going to stadiums in Iran.”

FIFA chief Gianni Infantino traveled to Iran in 2019, the same year as Khodayari’s death. At that time, he had a personal conversation with the then president Hasan Rouhani and the former president of the association Mehdi Taj, in which he clearly warned that women should have unrestricted access to all league matches and international matches, as this provision was not complied with. , FIFA suspended the Iranian association.

“The Transitional Committee of the Iranian Football Association deliberately misled FIFA,” Mohammad Heyrani, a former Iranian state television sports presenter, said in an interview with DW, adding: “Contrary to FIFA’s specifications, the required revision of the statutes of the National Iranian Football Federation (IRIFF) did not prevent politicians from interfering in the affairs of the association.” According to the journalist, the Iranian Parliament has never accepted the autonomy of IRIFF.

In 2018, under further pressure from FIFA, the arch-conservative clergy allowed the stadium gates to be opened to female fans during international matches, but in April this year women were once again denied entry to the qualifying match for the World Cup between Iran and Lebanon. The situation worsened for the women who insisted on entering the stadium, as they were victims of the use of pepper spray by the police force.

Will Iran be suspended again?

Another IRIFF suspension looms over Iranian football. Again, it is about the continued interference of the government and parliament in the affairs of the association, as well as the non-compliance with the requirement for women to enter the stadiums. If history repeats itself, the “historic event” symbolized by the visit of 500 women to the Azadi stadium, seems more like a public relations stunt to calm things down.

Despite all the criticism, the visit of 500 women is a ray of hope for soccer fans like Sarah. “Ticket sales must become more transparent and visiting a stadium must be as normal as going to the cinema,” Sarah told DW, promising: “We will definitely keep fighting and talk to FIFA so they can keep the pressure on the Iranian federation. ”.