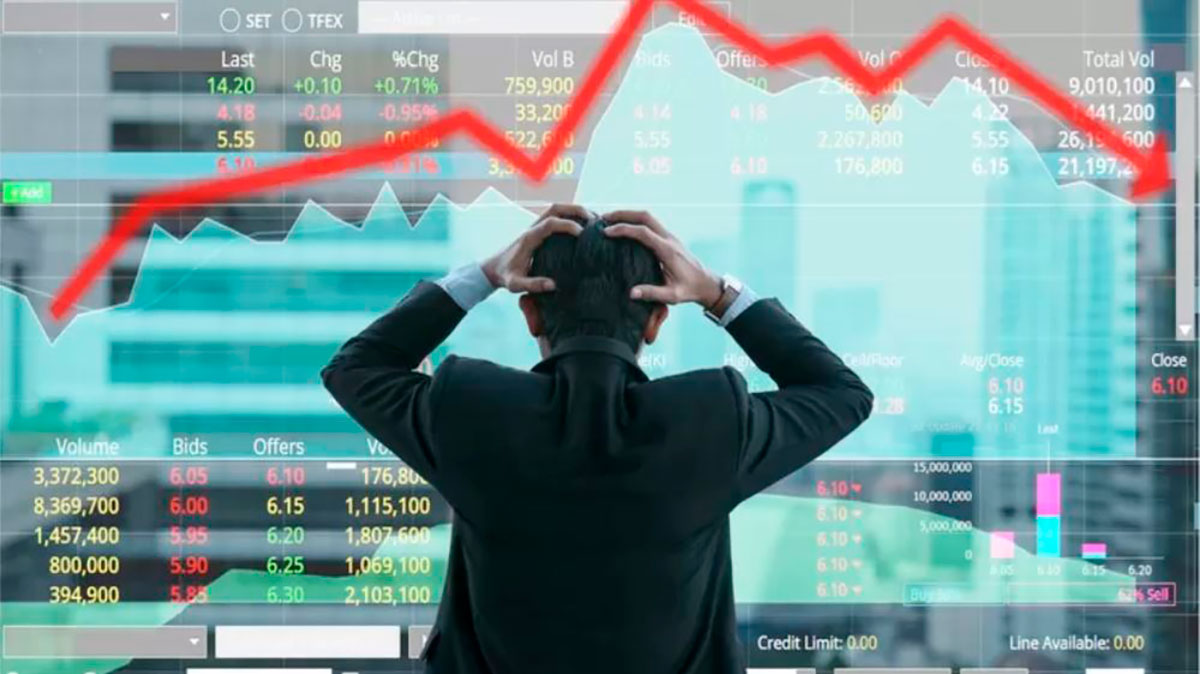 The squandering of economic stimulus from the pandemic, bottlenecks in supply chains from China’s restrictions and Russia’s invasion of Ukraine, among other factors, have pushed inflation to levels not seen in decades.

To tackle it, central banks resort to the manual and raise interest rateswhile the stock markets -with the US indices as a reference- react with prolonged falls that reflect the little faith of investors in what lies ahead.

And what awaits us is, according to many, a recession: a depression in economic activities that translates into negative growth in gross domestic product (GDP).

In general, a term of two consecutive quarters of economic contraction of the GDP is established to decree a “technical recession”.

Seven out of 10 economists in the United States believe that will come this year or nextaccording to a recent survey by the Financial Times and the University of Chicago Booth.

The survey was conducted in early June, before the last “black week” in the stock markets and the new rate hike, so it is likely that the ratio has increased.

Falling into a recession has bitter consequences: the investment crashconsumption and transactions cause business closures, cutbacks, massive job losses and inability to pay debts that can lead many to bankruptcy.

BBC Mundo has asked four leading economists if they believe there will be a recession in the US and in the world in the near future.

David Wessel, Director of the Hutchins Center for Fiscal and Monetary Policy at the Brookings Institution (Washington DC)

“However, I see a substantial possibility of a recession in the US, about a 65% chance, in 2023. The reason? Federal Reserve (Fed) Chairman Jay Powell doesn’t want his legacy to be to destroy the progress his predecessors made in bringing inflation down and keeping it low.

“However, at some point the Fed will face much harder decisionseither keep raising rates or freeze them, as the economy slows and inflation eases but falls short of the 2% target.

“There will be good arguments for either option. I anticipate that Powell’s Fed will be wrong to exceed more in the tightening stance than in the easing stance and thus a recession is likely, albeit a moderate one.

“I hope I am wrong, that all the problems in global supply chains are resolved, that the lingering economic effects of covid wear off, and that we (and the Fed) get some much needed good luck.

“But I don’t think that’s the most likely outcome.”

“I dare to say that at some point, possibly at the beginning of 2023, we will be facing a significant recessionary process both in Europe and in the United States.

“It will not be because of the pandemic, its supply chain disruptions, the Russian invasion of Ukraine, food shortages, or rising energy prices.

“It will be basically because, to put it in terms of the Austrian school of economics, the fictitious boom process driven by governments through a formidable monetary expansion will come to an end. The “boom” will end and the depression will come.

“For now, the northern hemisphere, with the arrival of summer and the end of the year festivities at the end of the second semester, I estimate that it will continue with a moderately reasonable level of activity.

“People will travel, spend and many will enjoy those financial assistance checks that governments in electoral campaigns during the pandemic distributed left and right. But heparties don’t last foreveras no elite athlete can perform forever under the effects of doping.

“At some point it must go back to what it was before, things must open up and many economists call this openness a depression, when it really is to return to the natural order of things

“It is also true that, given that US debt yields are now increasing, international capital will have a greater attraction in returning to the United States.

“Therefore, it will be necessary to see to what extent the global capital flows that arrive, together with an appreciation of the dollar and the devaluation of the rest of the currencies, affect the level of internal activity.”

“The Federal Reserve has renewed and increased its commitment to control inflation, raising interest rates by 0.75 points in June and putting on the table a possible new increase of another 0.75% for July.

“Although Chairman Joe Biden stated last week that the Fed is not trying to induce a recession, this fast track will almost certainly produce, probably by the end of this year, negative growth at best, or stagflation at worst.

“Consumers are still suffering from high prices as supply chains remain disrupted and conflicts continue abroad. And now that the Fed is raising rates at a proposed pace of around 4%, or perhaps higher, it must also deal with the effects of a weaker economy.

“The accelerated interest rate hike strategy will mean a significant cost to the average citizen and more broadly for the US economy, with limited impact in cooling supply-side pressures.

“In the end, raising the cost of capital reduces consumption and investment, which relieves pressures on the demand side – this already happens and manifests itself in a declining pace of sales – but it can hardly correct the restrictions on the supply side as a result of the aftermath of covid-19 or an international conflict.”

“It may not happen”

“Some economists see that interest rates are rising, that we are coming from a very sharp fall with a recession, and they believe that this cycle is going to return. Of course it is possible, but as long as geopolitics does not worsen with more conflicts, more wars, more shortages, more covid, there may not be a recession.

“It is not yet known. Precisely the United States has taken a long time raising its interest rates so as not to cause a recession. Those interest rates at a time when the economy is very hot can lead to a small recession.

“If there ever is it would be very light and rather I would think that they are going to put in place all the mechanisms so that it does not happen. There are too many events, too many geopolitical things that can change any economic forecast, so you have to be very cautious.

“The economy of countries moves in cycles. Both interest rates and economic recessions are part of these cycles, which is not serious as long as there is not very pronounced volatility.

“What we have just experienced with covid-19 is something new in the world. Almost all countries had negative growth and this recovery brings strong ups and downs; It is the volatility we are talking about, but it is less and less.

“I think the worst is over and the US is facing, like everyone else, inflation, and that inflation has to slow down growth a bit and slow it down a bit, even reaching negative numbers. That’s not so bad.”