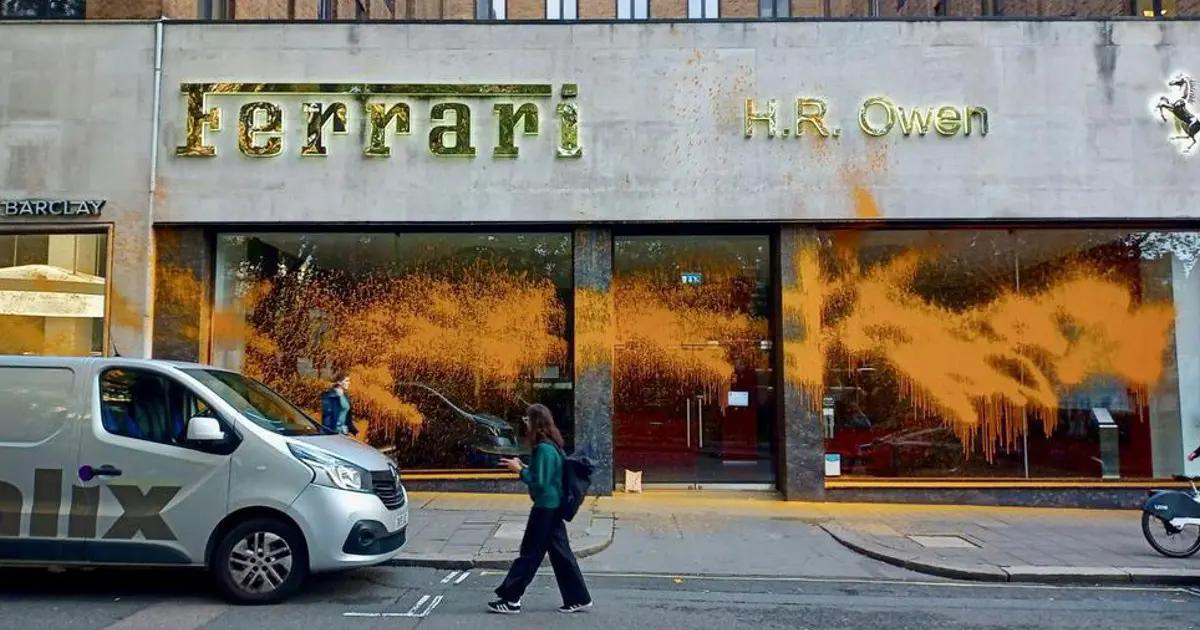 The windows from Ferrari, Bugatti, and Bentley dealerships were sprayed with water-based paint as part of a protest by an organization fighting climate change.

On October 26, 31-year-old Emma Brown from Scotland stole a modified fire extinguisher loaded with orange paint. With this, he vandalized the windows of the brands mentioned above, located in Berkeley Square and Bruton Street, in the Mayfair neighborhood, in central London.

We should remember that climate change activists chained themselves to Ferrari cars in Paris a few days ago.

The woman’s objective was to comply with a new act of protest by the Just Stop Oil organization. Before Brown and others involved were arrested by the London police, they made a series of demands public.

“We pay exorbitant bills for oil and gas, but it is nothing compared to the price our children will pay for it. The new oil and gas is a death sentence for people worldwide, ” said fellow Scot Carmen Lean in her manifesto.

“They can put us in jail, but they won’t stop our outrage at this government throwing millions of people under the bus. We are not asking for new oil. We are demanding it,” he added.

According to the activist, the British government used the crisis “to promote more austerity on the one hand and new oil licenses on the other.” He added, “if this government cared about people, they would be insulating homes, investing in affordable public transportation, and massively ramping up renewable energy.”

It should be noted that no Ferrari, Bugatti, or Bentley vehicles were affected. In addition, the paint used is easy to clean. As is evident, the organization intended to generate the greatest media noise to make their protests public. Thus, they have documented everything in photos and videos.

Last February, Just Stop Oil began its claims to stop gas and oil production in the United Kingdom. To date, 585 of his supporters have been arrested, according to data from the same organization.

The activists would be financed by a millionaire from the United States, according to the site El Confidencial. The strategy is to attract attention through acts like the one described above. Thus, they are the authors of the attack on the painting Sunflowers, by Vincent Van Gogh, for example.

On the other hand, it is not the first time luxury cars have been victims of environmental activists. During the Paris Motor Show, members of Extinction Rébellion protested against climate change, the industry, and the “individual vehicle” by throwing paint at classic Ferrari models on display.

After ruining the paint on the Ferrari Mondial T, 360 Modena, and F430, the activists taped their hands together to stage their protests. So the owners, members of an NGO that participated in raising funds for children with disabilities, will negatively impact the environment by restoring their paintings, reports the Motorpasion site.