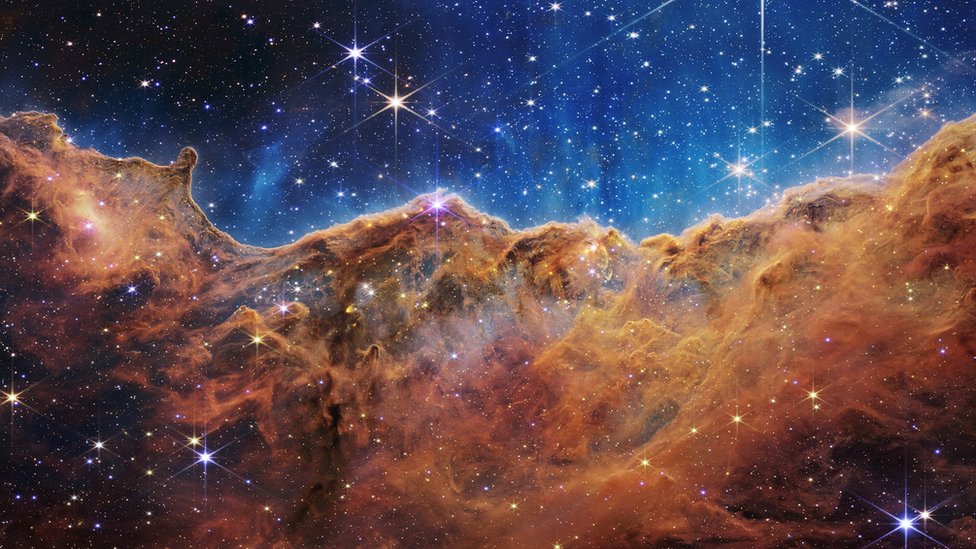 The entry into operation of the instrument of NASA, the European Space Agency and the Canadian Space Agency has revealed the best snapshots of the universe ever seen.

“It’s a completely new way of exploring the universe, marking the beginning of a new era,” says astronomer Michelle Thaller.

But it is also a look into the past, as some of the new photos are actually a picture of what was happening millions of years ago, explains NASA Administrator Bill Nelson.

“The speed of light is 186,000 miles per second (nearly 300,000 km per second) and that light has been traveling for 13.5 billion years, just a few hundred million years after the early universe. That is the threshold we are crossing,” he explains.

These are some of the new photos of the Universe.

The Carina Nebula, also called the Keel Nebula, was a classic target of the Hubble telescope, Webb’s predecessor.

Carina is one of the largest and brightest nebulae in the sky, located approximately 7,600 light-years from Earth.

Nebulae are stellar seedlings. They are massive clouds of gas and dust in which new stars are forming. In this Webb image, we don’t see many stars, just gas and dust.

Astronomers refer here to a “cosmic reef,” a kind of demarcation between dust in the lower half and then gas in the upper half. One of Webb’s key science goals is to study how stars form, and Carina is a great place to do it.

The South Ring, or “Eight Bursts” nebula, is a giant sphere of expanding gas and dust that has been illuminated by a dying star at its center.

As stars age, they change the way they generate energy and shed their outer layers. And then when the star gets really hot again, they energize all that material that it had previously neglected.

The South Ring is almost half a light-year across and about 2,000 light-years from Earth. This type of structure is called a “planetary nebula,” but it actually has nothing to do with planets.

About 290 million light-years away, Stephan’s Quintet lies in the constellation Pegasus.

It is notable for being the first compact group of galaxies ever discovered. Four of the five galaxies within the quintet are locked in a cosmic dance of repeated close encounters.

This Webb Telescope image doesn’t look that different from the Hubble Telescope version at first glance, but the new telescope’s infrared sensitivity will show up different features for astronomers to study.

And this was the great hope: to have Webb working together with Hubble. They have different strengths and being able to compare and contrast will give scientists a new dimension to their studies.

On Monday, the Webb had already presented its first image of deep space.

What does the James Webb telescope do?

In the image released on Monday, you can see a cluster of galaxies in the Southern Hemisphere constellation of Volans, known by the technical name of SMACS 0723.

The cluster itself is not that far away, “only” about 4.6 billion light-years away.

But the sheer mass of this cluster has deflected and magnified light from objects that are much, much further away. That’s a gravitational effect, like the astronomical equivalent of a telescope lens.

The James Webb, with its 6.5 m wide golden mirror and supersensitive infrared instruments, has been able to detect in the image the distorted shape (the red arcs) of galaxies that existed just 600 million years after the Big Bang (the Universe is 13.8 billion years old).

How does it compare to the Hubble telescope?

You may have heard of the Hubble Space Telescope, launched in 1990.

The instrument has had a huge impact on our understanding of the universe. But scientists are very excited about the potential of the new James Webb telescope and what we might learn as it peers into the depths of the Universe.

“The Webb has revealed entire galaxies that Hubble couldn’t see, showed details and underlying structures that weren’t visible in the Hubble images, and gave us an amazing preview of things to come,” says Emma Curtis-Lake, STFC Webb Fellow at the University of Hertfordshire, UK.

Hubble used to stare at the sky for weeks to produce these kinds of results, but Webb is capable of producing rich images much more quickly.

“What Webb accomplished in 12 hours is really amazing compared to what Hubble accomplished in about 10 days,” says Curtis-Lake. “And there is so much more to come!” she enthuses.

“We thought this day would never come”

Three decades of waiting. That’s how long it took to design, build, launch, and configure the most powerful space telescope ever conceived.

There were many times during those 30 years that we thought this day would never come; pivotal times when the project was so far over budget and so far behind schedule that we expected the US Congress to scrap the James Webb.

Thank God they stayed. The first images from the new telescope, including test images collected by engineers during the last six months of installation, have been impressive.

Part of it is the incredible detail you can see in the images, thanks to Webb’s 6.5m-wide primary mirror and high-fidelity infrared instruments.

But the speed at which the Webb can work is also amazing. It can produce data in a matter of hours, whereas Hubble would have taken weeks to do the same. I am looking forward to what the future will bring.