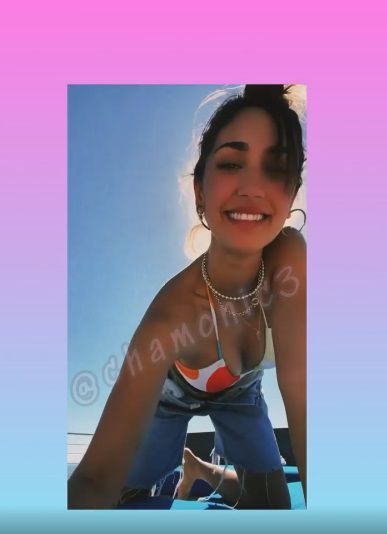 Javier Hernández Balcázar, better known as “Chicharito”, Was captured enjoying an adventurous vacation in the company of a woman, who is presumed could be his new partner.

The Mexican soccer player continues to achieve success in the professional field as a forward for the Los Angeles Galaxy, but lately he has gone through some difficulties in his personal life, because during the past 2021 he lost his grandfather and also officially separated from Sarah Kohan, with whom he had a brief marriage from which they had two children Nala and noah.

After the difficult year that he lived, Chicharito Hernández took a break to enjoy a well-deserved rest near the sea. However, something that drew attention was that during said trip, the athlete had the company of a mysterious woman whose only name has transcended, Nicole.

Instagram account Chamonic3 recovered a series of videos that were recorded during the walk of the Guadalajara with the woman in question. According to the information shared by the owner of the account, the romantic trip as a couple was part of the Christmas holidays that were celebrated until a few hours ago.

The collage-like audiovisual fragment begins with an image of the 33-year-old athlete sitting on the edge of a yacht with Nicole, who left her hair in the air. The video continued with a small cut where the feet of a woman enjoying the sand appeared and followed with a shot of some food that they enjoyed, where some chips and guacamole stood out.

Later, Nicole was seen in front of the camera for the first time; She was wearing long denim shorts and a colorful bikini top. The so-called lovers would not only have amused themselves at sea, where Chicharito dared to practice water skiing, as there were also some images where they could be seen taking a walk through some hills.

The apparent couple was also seen taking a ride in a four-wheel-drive car and riding a nearby path on bicycles. This is how the incredible vacations that Javier Hernández took with who could be his new girlfriend were summed up.

So far, the Mexican athlete has not confirmed or denied his alleged romance with Nicole. However, if he shared with his little more than 5.4 million followers on Instagram, a photograph that they took while he was practicing water skiing with the corresponding measurements.

In fact, the man from Guadalajara stopped seeing that his goal was to learn to ski on water, an objective that he has already achieved. “Achievement Unlocked, Water Skiing for the First Time”He wrote next to the postcard that he uploaded.

The footballer caused a sensation with his publication, so the comment box was quickly filled with compliments, messages of affection and good wishes for him. Sebastián Rulli was surprised to react to Chicharito’s posting and only recognized that he had visibly done very well.

“Total crack !!! You did amazing bro !! Like fish in the water“Wrote the actor. “When you unlock the dream of all the chiva brothers we want you back”, “You are a great athlete”, “How handsome you look”, “It is Valle de Bravo”, were some of the messages that the man from Guadalajara received.

However, he also received some criticism, as users of the platform took advantage of the space to talk about his parental responsibility, which has been in question for some months, especially since he separated from Sarah Kohan, whom he married in 2019 and is currently in divorce proceedings.