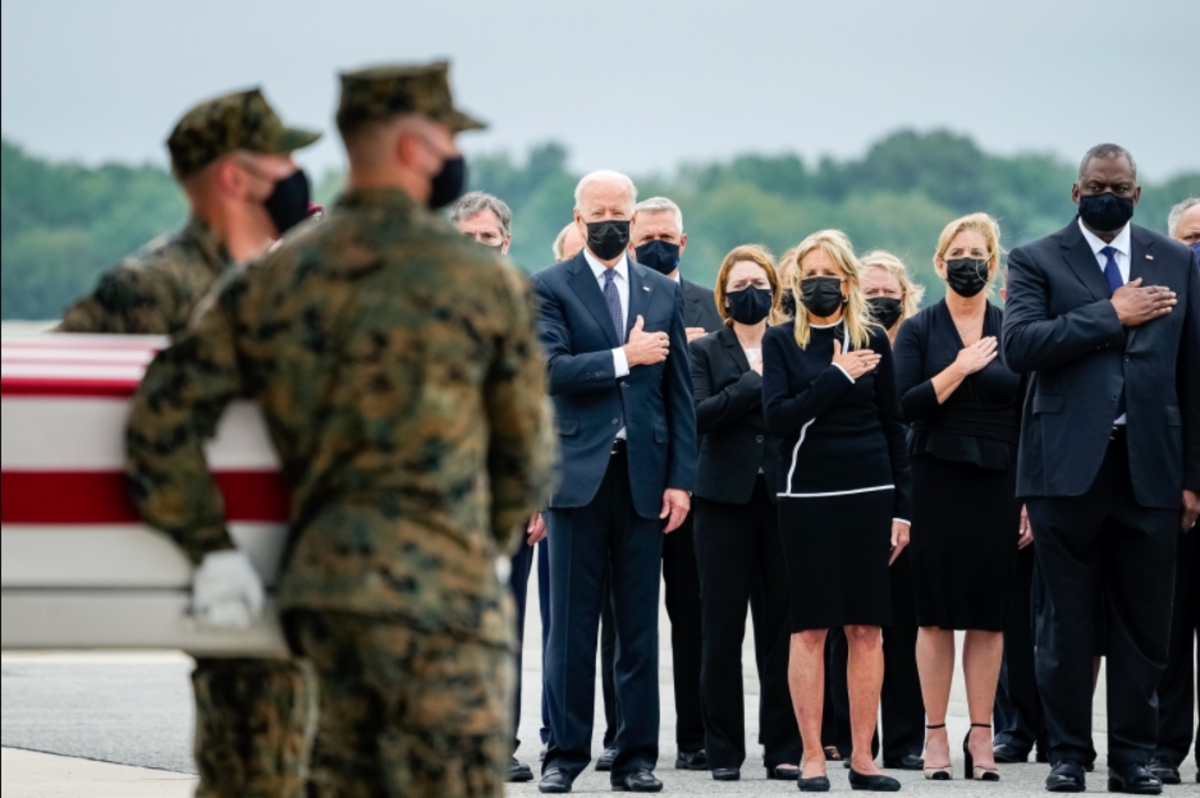 This Sunday, August 29, the President of the United States, Joe Biden, accompanied by his wife, they honored the coffins of the thirteen soldiers who died last Thursday in the attack in Kabul, Afghanistan. The ceremony was held at the Dover military base in Delaware.

It is the first time that Biden, since he was president, has attended what the military calls a “solemn transfer.” His predecessor, Donald Trump, also attended one, while Barack Obama was present on two similar occasions.

At the event, the presidential couple were accompanied by the head of the Pentagon, Lloyd Austin; the Secretary of State, Antony Blinken; the Chief of Staff, General Mark Milley; and other senior military officials.

According to EFE, Biden arrived at the military base at 8:00 in the morning (local time) and did not allow access to the press, as the relatives of the 13 deceased asked that the act be carried out privately. The bodies arrived in a C-17 plane. The first thing the president and the first lady did was to access the interior of the aircraft through a ramp, where, according to journalists who were there, there was a prayer inside.

Six soldiers were carrying the remains of the deceased, before the eyes of their relatives who were on the other side of the runway. Among the porters, members of the Army, Marines and members of the Navy took turns.

The 13 service members that we lost were heroes who made the ultimate sacrifice in service of our highest American ideals and while saving the lives of others. Our sacred obligation to the families of these heroes will last forever. pic.twitter.com/lPx4a4ebS7

The military died after an attack by the Islamic State (IS) at the Harmid Karzai International Airport in Kabul last Thursday, which also caused 18 American servicemen were injured and more than a hundred people were killed at the scene.

Five of the 13 deceased were barely 20 years old. The soldiers were from Massachusetts, California, Nebraska, Indiana, Texas, Missouri, Wyoming, Ohio, and Tennessee.

Throughout the more than half an hour, Biden remained impassive with his hand on his chest as a sign of respect as the coffins were removed one by one from the plane to put them inside several funeral vans.

After the bodies of the C-17 were lowered, the presidential couple and the relatives of the deceased went to the Dover base morgue, which is the largest in the country, to carry out the funeral and then be taken to their places. originally.

It is the first time that the US military has been killed by an Afghanistan attack since February 2020..

With information from EFE and AFP.