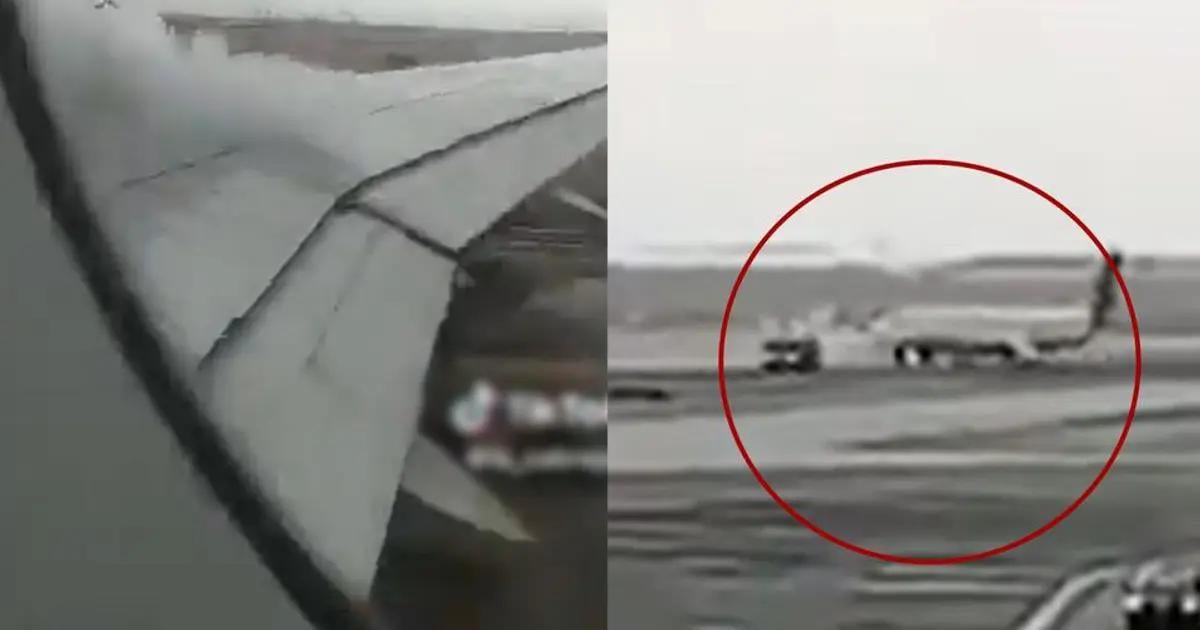 Several videos of the moments before the tragedy that left two aeronautical firefighters dead at Jorge Chávez airport were published on social networks. The images show the last seconds alive of Nicolás Andrés Santa Gadea Morales (23) and Ángel Torres García (44), while a passenger of the crashed flight recorded the exact moment of the impact.

The first images show how both aeronautical firefighters boarded Lima Airport Partners (LAP) emergency truck No. 3. Although it is not known if the exit of the vehicle was an emergency or a drill, in the video, a siren is heard. The uniformed officers quickly respond to their call.

“Before leaving for their last emergency, here you see LAP aeronautical firefighters Nicolás Andrés Santa Gadea Morales (23) and Ángel Torres García (44) getting ready in a hurry. The vehicles are No. 3 in front, No. 1 next, and at the end, a pickup truck,” detailed the Twitter user who posted the video.

Seconds after boarding the unit, it quickly moved to the runway. Unfortunately, the Latam Peru airplane was also in that area and hit the vehicle when it tried to take off towards Juliaca.

A passenger of the Lima – Juliaca flight recorded from inside the plane the exact moment when the aircraft collided with the LAP vehicle.

They did not know that the truck would be there

Manuel Van Oordt, CEO of Latam Airlines Peru, indicated that no emergency was reported inside the flight about to take off. “The flight was in optimal condition and had permission to take off. It encountered a truck on the runway, and we don’t know what that truck was doing there,” he told the press.

He added that the control tower permits any vehicle to enter the runway. “We are waiting to clarify this fact, and we have not had any coordination (with LAP)… There are very precise protocols for take-off, and they had been complied with, but when the plane is on the runway, it is very difficult for it to stop”, he added.

Through a press release, Lima Airport Partners informed of the death of two aeronautical firefighters of the Rescue Corps. The accident occurred during the takeoff of flight LA2213 covering the route Lima – Juliaca.

Two firefighters died this Friday after their vehicle collided with a LATAM plane taking off at Lima airport, whose operations were halted until Saturday.

“Lima Airport Partners deeply regrets the loss of the lives of two members of the LAP Aeronautical Fire Department in the accident that occurred this afternoon between a firefighter vehicle and the aircraft serving flight LA2213 covering the (local) Lima-Juliaca route that occurred this afternoon,” the operator of the Peruvian capital’s international airport reported.

This is the full announcement in English:

Regarding the progress of the coordination to remove the crashed aircraft from the runway of Jorge Chávez International Airport, LAP informs the following:

The Aviation Accident Investigation Commission (CIAA), under the Ministry of Transport and Communications, is the authority in charge of determining the causes according to eminently technical criteria.

The removal of all the elements involved in the accident, including the aircraft, can only be done with the CIAA’s authorization. In this regard, LAP has been providing the necessary facilities.

At the same time, personnel from the Public Prosecutor’s Office is in charge of all the procedures related to the victims of the accident.

When the removal of the aircraft is authorized, a runway inspection will be carried out to verify any damage to the infrastructure, which will allow us to resume operations in complete safety and safeguard the integrity of our passengers and workers.

We regret the loss of our colleagues and we are closely monitoring the health condition of the injured aeronautical firefighter.

We recommend our users and passengers to be aware of the communications that LAP will issue through its official channels.

The deceased firefighters were identified as Ángel Torres and Nicolás Santa Gadea. In addition to them, another rescue worker, Manuel Villanueva Alarcó, who was traveling in the fire truck, was injured “in critical condition due to a traumatic brain injury,” according to the head of Social Security, Aurelio Orellana.

According to aeronautical protocols, this implied the cancellation of numerous flights and the diversion of those heading to the Peruvian capital to Pisco Airport (250 km south of Lima).

The temporary closure of the air terminal impacted LATAM’s international operations on hemispheric flights, especially to North America, since Lima is a hub for the southern airline.

It also caused a real overflow at the Pisco airport, which forced sending more immigration inspectors and enabled the air terminals of Piura, Chiclayo, Trujillo, Iquitos, Arequipa, and Cusco to receive international flights, according to the Peruvian immigration service.