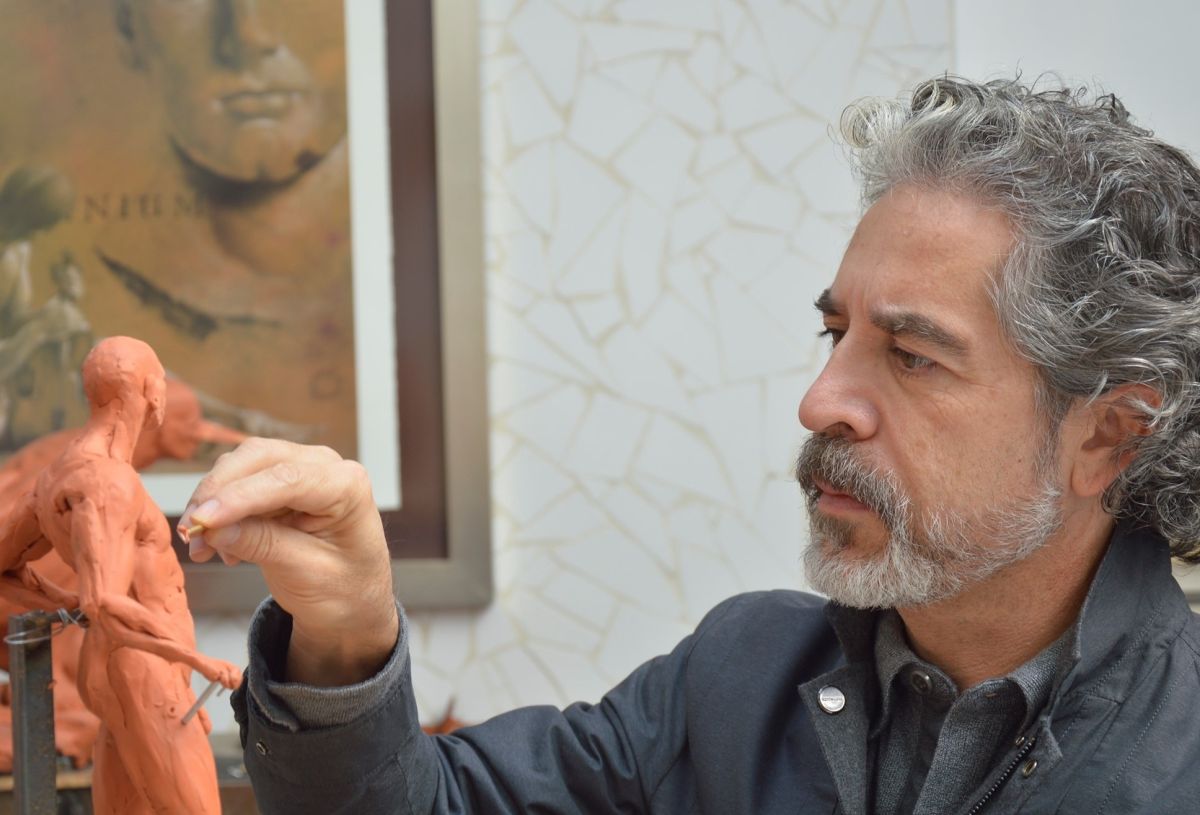 When the plastic artist Jorge Marín placed his sculpture for the first time Wings of Mexico on Reforma Avenue in Mexico City, he never thought that it would become a world-traveling piece and that it would have a great attraction among immigrants and those who do not have a voice.

“We started on public roads, and after finding an intense response by attracting a large audience and motivating interaction and participation, we decided to send it to travel to other venues in Mexico and abroad when we discovered that it had all that punch (impact)”, said Jorge Marín in an interview with The opinion .

On June 6, during the Summit of the Americas, the sculpture Wings of Mexico was unveiled at the Griffith Observatory, an iconic site in the city of Los Angeles to which thousands of Angelenos and tourists flock daily. People line up to take photos with the Wings of Mexico, which are part of a series of sculptures made by Marín in 2010.

“The Wings of Mexico they have taken on a character of their own, and it has been very stimulating, realizing that minority groups have become empowered by sculpture; It is not only admired by Mexicans but also by Filipino migrants in Singapore, the United States and Costa Rica.

“They climb on the sculpture, they take it as their own and it is a manifestation that they exist. We discovered a fantastic phenomenon that has empowered an audience that normally does not have a microphone to express their presence and disagreements”.

The artist says that he never imagined the strength they would have Wings of Mexico. “Reality always places us, that’s why we always have to be vigilant. I discovered what is fundamental for me, sharing the microphone with minority groups from all over the world, because the moment they stand next to the sculpture for a photo it becomes like a banner, a big poster, and they become invisible”.

The Wings of Mexico It was a gift from the Mexico City government to the city of Los Angeles.

“In 2016 they were displayed for the first time outside of Los Angeles City Hall. From then on, they were put in warehouses of the city council, and there they were almost 6 years until they found the option where they could stay”, says Sandra Benito, director of the Jorge Marín Foundation.

And the sculptor really liked that they stayed at the Griffith Observatory from where you can see all of Los Angeles, a city made up of immigrants who have come from all over the planet, but especially from Mexico.

“It was exactly what I wanted, an iconic place that would be a meeting point for people. I think it is a place where very diverse audiences go. But I was interested that it be a visual platform for migrants to express their presence in the United States and make us see.

“I have a special commitment to Mexican migration to the United States, where the Mexican population has emigrated the most. They are groups that must be made visible and present. They are people who live in a tremendous ambiguity between limbo and illegal existence. It will be a slow fight so that they can fully enjoy and be recognized as part of the community.”

And he adds that if by the way we can have audiences from other parts of the world, let them go and see the Wings of a Mexican to share them with other causes in the world. “That is the essence of the Wings.”

How did the idea of ​​creating the Wings of Mexico? What inspires you?

“Reality always ends up surprising me, and it was a mere coincidence. These wings were meant to be part of another sculpture. But a reality check came in the foundry, a chaotic workshop full of sculptures, workers, bronze everywhere, where they were left leaning against the wall; and at that moment, he crossed a mason who was doing a remodeling and I saw him go by with his wings behind him; and I said reality is telling me how it has to be. The one who enforces them is the individual who stands in front”.

That was a magical moment, in which Marín was convinced that the Wings of MexicoOr should they go alone? But initially they were part of a Victoria, a winged woman (who has wings), “but that festive spirit of each celebrating their own victories will have remained,” she says.

What he loves, he says, is knowing that each person feels the piece and the performer to their own measure. “Everyone brings a different story; and that everyone reflect on their fears, joys and desires”.

The artist, he explains, who used bronze to sculpt the Wings of Mexico so that they would “endure an eternity”.

In fact, he comments that it was the writer Carlos Fuentes, who wrote in 2010, the book Wings of Mexico which commemorates the 10 years of the sculpture that made an analogy of its works in bronze with the bronze race. “To the bronze, Marín gives wings: angel wings”, he wrote in the foreword.

“The teacher made me see that my work is made of pure bronze, like the Mexican race, pure bronze, a very resistant material.”

The number of people who have taken pictures with the Wings of Mexico in 10 years is incalculable. “There have been millions in Tel Aviv, Singapore, Madrid, Toledo.”

But they have gone further Wings of Mexico have visited Berlin, The Hague, Nagoya, Dubai, Quebec, San Antonio, Denver, San José, among other cities.

The truth – he admits – to feel doubly satisfied with his Alas de México in the creative part.

“It is a piece that has only given me joy. I discovered a plus: to benefit others with my work. Art does a lot of good for the formation of individuals. You have to see more art”.

But he asks that we not stay with seeing art in the street. “I hope that my sculptures arouse curiosity to visit museums because art teaches us and makes us more complete to live in such a complex society.”

His wishes are that the Wings of Mexico have an indefinite itinerary and are taken and made known to all possible audiences. “I like to think that my work is linked to Mexico, and my country is put in the head of everyone who sees the work, and think more about our global participation”

Sandra Benito, director of the Jorge Marín Foundation, said they hope the iconic Alas de México sculpture will have a permanent home at the Griffith observatory.

“There are 15 Wings of Mexico that are permanently in different parts of the world, and some of them have participated in traveling exhibitions in 35 cities. Due to the existence of a code of ethics in art, the artist will only be able to make 13 more Wings of Mexico to take them to different cities and reach a total of 28 copies, and then the mold is broken.

The idea – explains Benito – is that they remain as a representation of Mexican art in different parts of the world as a symbol of migration, peace and freedom that has been created naturally.

He recalled that the Wings of Mexico are part of the exhibition City Wings of 13 large-format pieces for the public space created in 2010. “Las Alas de México separated, acquired their own project and went to travel alone”.

Jorge Marín sent “an enormous greeting to the migrants who, due to a forced situation, had to leave the country,” and invited them to go see his Wings of Mexico at the Griffith observatory.