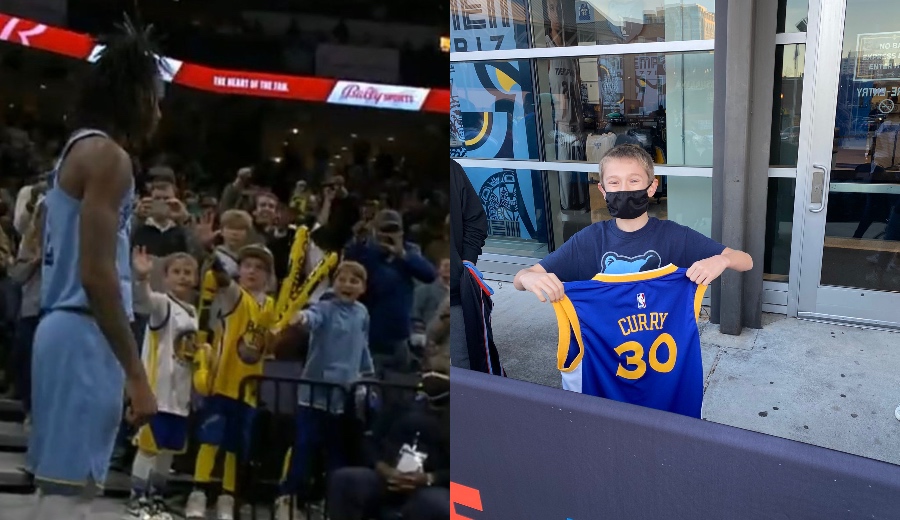 The memphis grizzlies They live in a cloud. Immersed in the best winning streak in their history, they are already 11 consecutive games in which they have ended up defeating their rival. A dynamic that places them as the best NBA team today, an achievement in which Ja Morant he is largely to blame. Accompanied by Jaren Jackson Junior, Desmond Bane or Brandon Clarke, among others, the young point guard is giving performances at an excellent level, with a varied repertoire of highlights in each game.

In one of the last games against the Golden State Warriors, the day Memphis won 116-108, Morant once again caused more than one ovation from the stands thanks to spectacular actions. Connected to the match as if his life depended on it, the star scored 29 points, grabbed 8 rebounds and distributed 5 assists. A whole exhibition in which there was also a delicate moment, much commented on at the end of the meeting by the press and social networks (JJ Redick stated on TV: “Ha, who do you think you are?”). After scoring the key basket, the 22-year-old walked into the stands, where three celebrating little boys in Warriors jerseys were waiting for him, and one tried to high-five him. Ja’s reaction could not have been colder: challenging look and return to the track.

Ja Morant on the kid with the Steph jersey 😂

“He was disrespectful with that jersey on. We in Memphis. It looked like he wanted to cheer but he had that jersey on. I apologized to him but in that moment, bro, take that jersey off and then dap me up.” pic.twitter.com/t5NFzc2jcq

“For that kid to wear that Warriors jersey was disrespectful. This is Memphis. I apologize but at that moment take off your shirt and then celebrate with me », he stated at a press conference, in statements that, it is true, ended with a half smile from Ja. Insufficient for many media, fans and, apparently, also for the Grizzlies, who got down to work to turn the situation around. According to journalist Drew Hill, they tried to contact the child… without success.

Tomorrow at 5pm, kids 12 and under can exchange any old opposing player NBA jersey for a new Ja Morant or Jaren Jackson Jr. replica jersey + two tickets to the game.

The solution? Quick and effective. The Grizzlies reported a day later that the first 250 kids to come to the pavilion before the next game wearing an old, used jersey from any NBA team would receive one from Ja Morant or Jaren Jackson Junior and two tickets to the game (against Minnesota, win). An initiative that had unbeatable answer: long queue outside the facility before the crash, with a special person in first position. Eli, 11 years old. Yes, the same kid who wore Stephen Curry’s jersey to the Warriors game the day before, grinning from ear to ear. When asked about Hill, his answer was clear: “I respect Steph but I’m a Grizzlies fan”

Already a line outside FedExForum to exchange jerseys and get tickets.

And look who the first kid in line is trading in 😬 pic.twitter.com/LaSu2Dt41a