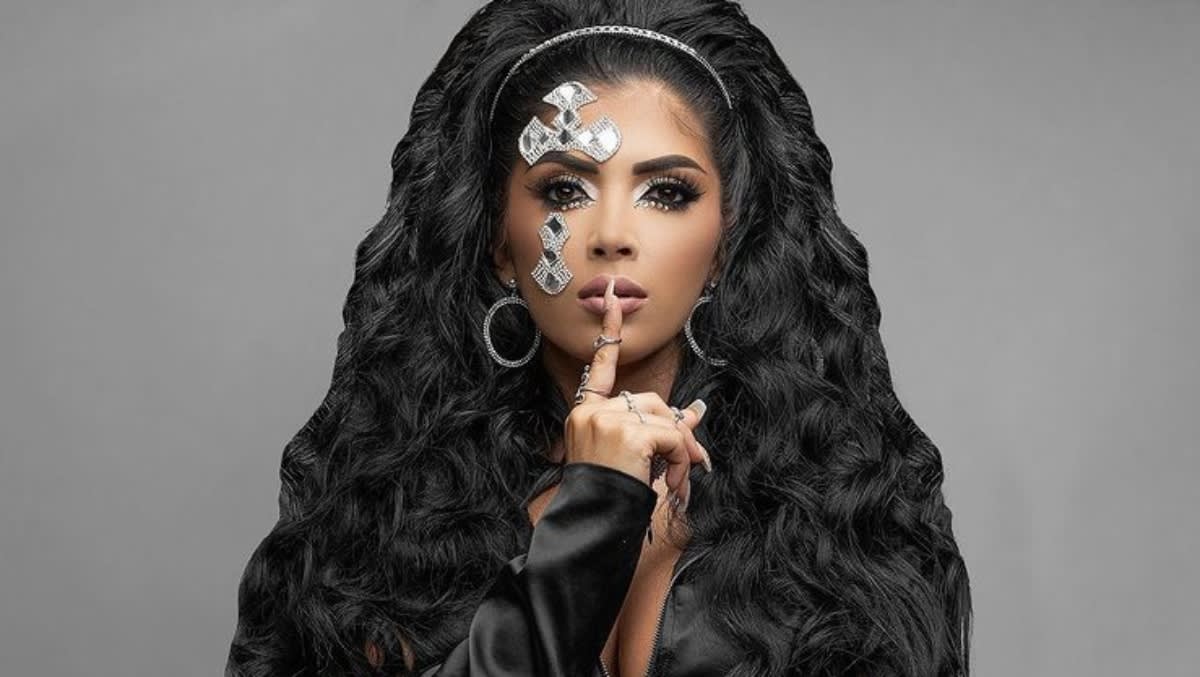 “They are going to divorce me.” The Guatemalan model, Kimberly Flores, wife of the Mexican singer, Edwin Luna surprises in the reality show “The house of the famous ”, when revealing that another man is going to have to share a room, it is the former participant of Exatlon, Kelvin Renteria, the model affirms that with this they will give him a divorce.

Whoops that reality show, Lto the famous house has been giving a lot to talk about, and since it began a few days ago, the series has already led to endless rumors of possible romances, such is the case of Edwin Luna’s wife, Kimberly Flores, who has been in the eye of the hurricane because of the closeness that has been seen between her and the actor Roberto Romano, unleashing an endless number of theories that suggest that they have a relationship.

Do Roberto Romano and Kimberly Flores have a romance?

And it is that since the show began, both artists have seen each other a lot together, giving each other a show of affection that has questioned the great love that the Guatemalan model, Kimberly Flores, has for her husband, the singer of the band. The Trakalosa, Edwin Luna, faced with these possible rumors, was the same interpreter who commented that he did not know what was really happening but that he still loved her.

In a recent interview, Edwin commented that he has been watching his wife’s entire show, confessing that for him, there was still nothing that made him doubt his love, even confessing that he was falling even more in love with her, despite the fact that many users affirm in social networks that she is being unfaithful to Roberto Romano.

Unfortunately the problems for the marriage between Kimberly Flores and Edwin Luna seem not to end soon, since it was a few days ago when it was also announced that the Guatemalan model will now have to share a suite with another man, causing Edwin’s wife Luna commented that ultimately they are going to give her a divorce now.

According to the portal The opinion, Things could get even more complicated for Edwin Luna after the former contestant on Exatlón United States, Kelvin Renteria, leader of the house, chose Kimberly Flores to accompany him to the private suite, which was located far from all the other rooms, causing a great surprise in the model.

The portal reports that it was last week when Anahí Izali also enjoyed this privilege, causing “things got quite hot” in the jacuzzi between her and the actor Christian de la Campa and that is precisely where Kelvin will also have to be Renteria and Kimberly Flores, wife of Edwin Luna.

The opinion comments that one of the rules of the show is that to be the leader of the house, keys would have to be hidden all over the rooms, and the key that Kelvin found was in Edwin’s wife’s bed, which is why the ex contestant of Exatlon He saw fit for Kim to accompany him to this private room.

Through the video shared by the @cheesemes account, it is possible to see how Kelvin Renteria chose Kimberly Flores to accompany him to this room, confessing that he did it more than anything because it was in his bed where he found the key: “I think I felt a little bad because I found the key on the bed that belongs to her, so I think Kimberly has every right to be there. “

At these words, Edwin Luna’s wife was very surprised that Kelvin chose her, since she would have to spend a whole week sleeping in the same room with another man who is not her husband: “Oh God, I didn’t even expect it, but, you sleep on the floor and I sleep in bed ”, despite these words, she was still very undecided about whether or not to choose to stay in the suite with him.

“They are going to divorce me with this”; Kimberly Flores will have to share a room with another man

When asked what his decision would be, Kimberly Flores, Edwin Luna’s wife replied that she agreed to stay there: “No, yes, yes, obviously,” she commented to the applause of her colleagues, after which the production told her that they could go to see the room, which would be his room for a whole week.

However, when they were walking, the Guatemalan confessed: “They are going to divorce me with this,” to which the former contestant replied that no, that was not going to happen, commenting that he did it with all respect, since he He had felt bad because he had found the key in her bed, to which Kimberly replied that there was no problem, but what will Edwin Luna think when he discovers that his wife will sleep with another man? VIDEO HERE

The controversy has been unleashed and it seems that she is not willing to leave, and it was not long ago when the reality show just began ‘The home of the famous’ that the drama has already flooded the program and it is that it all started from that supposed love triangle between Kimberly Flores, wife of Edwin Luna, the former beauty queen, Alicia Machado and the actor Roberto Romano.

It was not just a week ago that the chain of Telemundo launched his new reality called The house of the famous, where a group of celebrities had to live in a house for three months until they were eliminated, in this program the famous would be recorded 24 hours a day, and several of them have already uncovered even their last secrets. Filed Under: Kimberly Flores Will Have To Share A Room With Another Man

The supposed love triangle of reality

After this, various rumors have arisen where many followers of the reality show that the Guatemalan model, Kimberly Flores, has been unfaithful to her husband, the singer Edwin Luna, this because Kimberly has been seen very close to the actor Roberto Romano, unleashing endless rumors about it.

However, it seems that this handsome actor is not doing this only with Edwin Luna’s wife, but also with former Miss Universe, Alicia Machado, since as with Kimberly, both have been very intimate, to such a degree that the Venezuelan and the actor were caught in the same bed, could it be that he is doing his little fight with both of them? Filed Under: Kimberly Flores Will Have To Share A Room With Another Man

From the bed, Alicia Machado appears with Roberto Romano

It was through the Instagram account of the show program Tell me what you know where they captured Alicia Machado lying in the same bed as the actor Roberto Romano, causing thousands of users to highlight that Kimberly Flores’ “new boyfriend” was now with the former Miss Universe.

In the video, which already has more than 215 thousand views within hours of being shared, it is possible to see Alicia Machado and Roberto Romano hugging and lying on the same bed, while Roberto appeared shirtless and the Venezuelan covered from feet to toe. head with the blanket, both were talking without the microphone. Filed Under: Kimberly Flores Will Have To Share A Room With Another Man

Is there nothing more with Kimberly Flores?

During the clip lasting two and a half minutes, both artists were lying down while having a small whisper talk, and they were without a microphone, which caused part of the production to tell them to put it back on, at this, they laughed and they commented that they were already going to sleep.

Despite this, they continued in the same bed, while Roberto Romano hugged Alicia Machado by the stomach and she hugged the actor a little more. This generated endless comments where many began to wonder what had happened to Kimberly Flores. Filed Under: Kimberly Flores Will Have To Share A Room With Another Man

“It is worth it that she is married”

It was not long when the news also began to spread that Alicia Machado had told Edwin Luna’s wife everything after seeing her “flirting” with the actor Roberto Romano, where the Venezuelan argued that she should respect, since that she was married with children.

According to the portal Millennium, It was argued that the former queen attacked the Guatemalan woman, arguing the following: “It is worth her that she is married. She is a married woman with three children, and her husband is a famous hypermega. The man is from a music guild and they are not assholes. What do you and also go and get into his bed? , that is, I have not gotten into the bed of any of the men, “he commented at the time. YOU CAN SEE THE VIDEO HERE. Filed Under: Kimberly Flores Will Have To Share A Room With Another Man