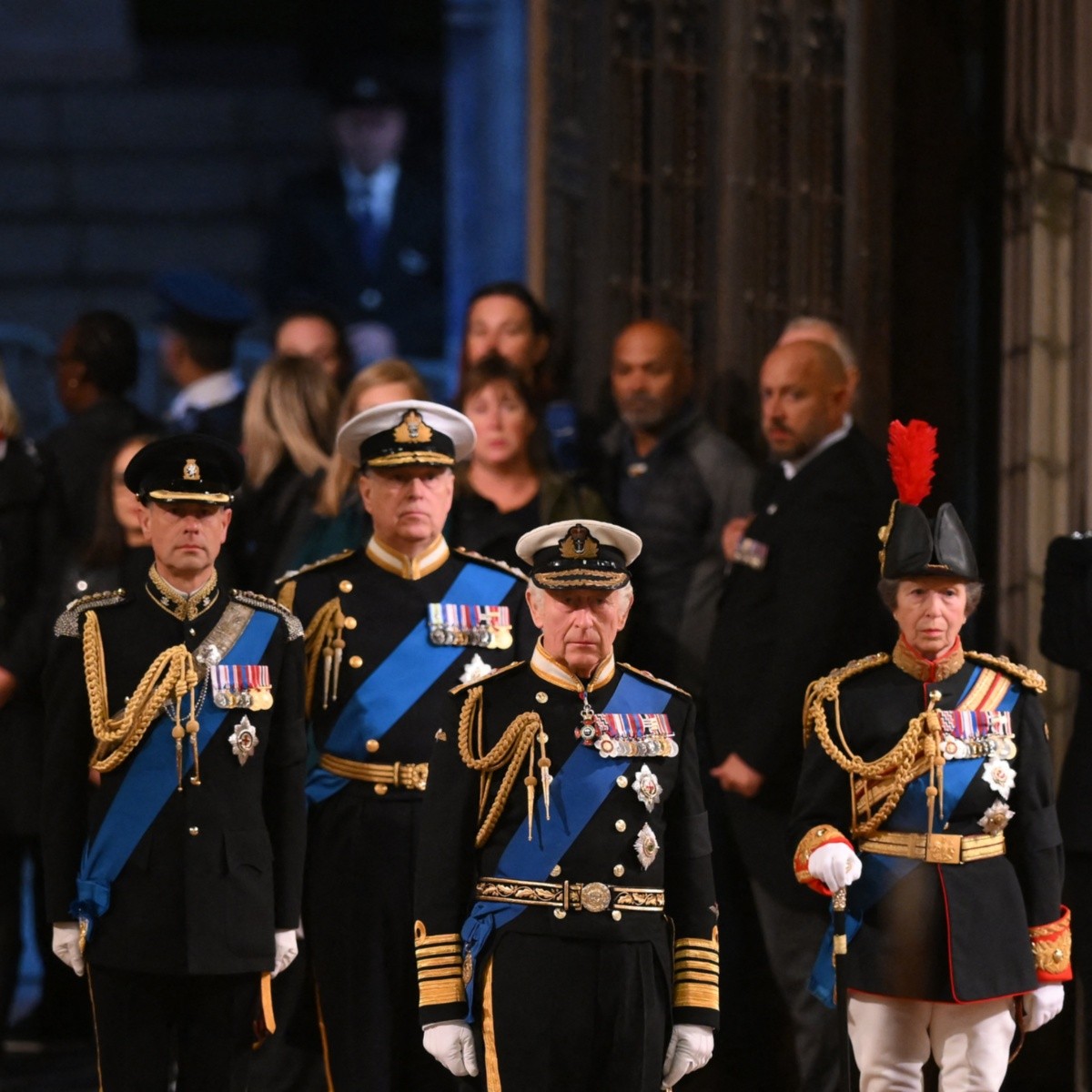 London, United Kingdom.- The new king charles iii led on Friday with his brothers a vigil around the coffin of his mother, the Queen isabel IIin the funeral chapel established in the oldest part of the British parliament in London.

Dressed in their gala military uniforms, Carlos, the princess annethe prince andrew and the prince edward they had to remain silent and with their heads bowed during the 15 minutes that this tribute, known as the “princes vigil“.

Carlos III culminated this Friday in Wales his tour of the United Kingdom as the new monarch, before watching over the coffin of his late mother Elizabeth II with his brothers at the “Vigil of the Princes” in London.

“Diolch o galon ichi am eich geiriau caredig” (“Thank you from the bottom of my heart for your kind words”), said the new 73-year-old monarch before the displays of affection and condolences from the regional Parliament, which he visited with his wife Camila after a religious service at Llandaff Cathedral in Cardiff.

His mother passed away Thursday at the age of 96. The death of this symbol of unity during his seven-decade long reign fueled pro-independence sentiment in Wales, as well as in Scotland and Northern Ireland, and Charles III’s tour was seen as crucial.

“I hope Wales is independent. Of course it would disrupt our economy because we depend on the UK economy, but I’m a strong believer in independence,” Zahra Ameri, 22, a tea shop assistant, told AFP.

But hundreds of people royal family fansalso welcomed with Welsh flags, white and green with a red dragon, Carlos III and the new queen consort, Camila.

“We want to support him, be by his side, offer our condolences. We will not go to the funeral, we think that seeing a member of the royal family alive is better than following someone’s funeral,” said Vera Jackson, a 39-year-old bank worker.

In London, thousands of people have paraded since Wednesday for the burning chapel of Elizabeth II installed in Westminster Hall, the oldest part of the British Parliament.

On Friday morning, the continuous influx forced the authorities to prevent for “at least” six hours more people from joining the kilometric queue that runs along the River Thames, where the wait was around 2:00 p.m. shortly before.

Shortly before it was known that a man stabbed two policemen in the central neighborhood of Soho.

The agents’ lives are not in danger and the police ruled out any terrorist motivation, but the attack raised concerns about the security of the funeral scheduled for Monday with the presence of a hundred heads of state and representatives of monarchies from all over the world.

Inside Westminster Hall, the coffin of Elizabeth II rests on a purple catafalque, at the top of a four-step plinth, covered by the royal standard, the imperial crown and the scepter, symbols of power of the British monarchy.

The burning chapel is open almost non-stop until 06:30 (05:30 GMT) on Monday, a few hours before the planned state funeral at Westminster Abbey and the later Burial of the queen in a church next to Windsor Castle.

It has been the scene of scenes of great emotion and deep respect from the British public.

Carlos and his brothers already watched over the coffin in Edinburgh on Monday, while the Scots paraded through the first burning chapel of the deceased monarch when he was in his Scottish castle of Balmoral.

For 10 minutes, they stood crestfallen on all four sides of the oak coffindressed in their military finery, with the exception of Andrés, to whom the queen herself withdrew this honor last year as a result of a sexual scandal.

However, an exception will allow Andrés to wear his uniform this time, as will Prince Henry, 38.

According to real sources, Carlos III would have asked that the eight grandchildren of Elizabeth II participate in the vigil. It was not clear however if they will do it on Friday, together with their parents, or the next day.

With the rise of Carlos, the title of Prince of Wales passed on to his eldest son, William40 years old, now heir to the throne.

However, in this region of southwestern Britain, some have called for the abolition of this title created seven centuries ago.

“There are mixed opinions. A lot of people don’t want the title of Prince of Wales because they think it should go to a Welsh person,” Maria Sarnacki, mayor of Caernarfon, a town known for its imposing castle, told AFP.

The title of Prince of Wales was originally used by the native princes, but the last, Llywelyn ap Gruffudd, was executed in 1282 during the conquest of Wales by King Edward I of England.

Almost 750 years later, the region enjoys political autonomy and registers a distance from the Crown that Carlos III, less popular than his mother, will have to make an effort to overcome.