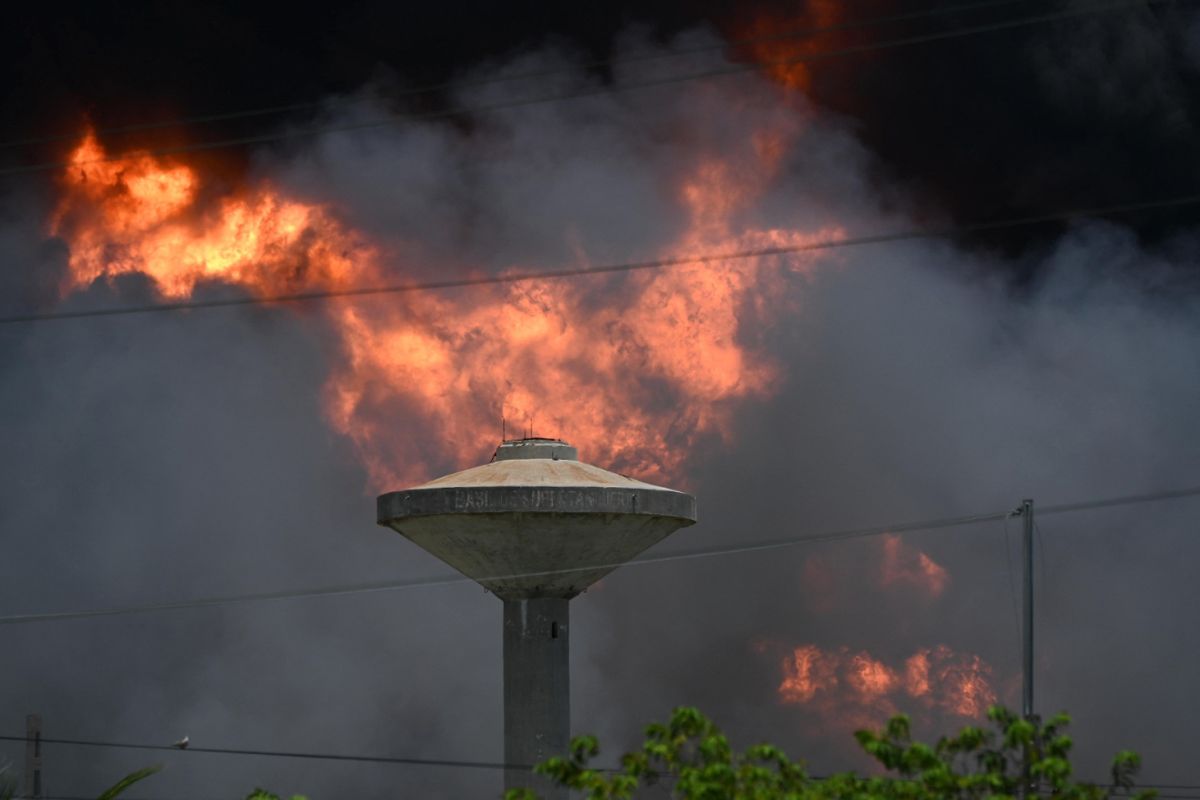 HAVANA – The great fire at the Supertanker Base in the industrial zone of the province of Matanzas, in the north of Cuba and some 80 miles (104 km) from Havana, continued this Saturday without the emergency teams being able to reduce its intensity after almost 24 hours of starting.

The fire started Friday afternoon when lightning struck one of the eight fuel depots. On the morning of this Saturday, a second explosion and fire occurred in another fuel tank that caused visible columns of smoke even in Havana.

The president of Cuba, Miguel Díaz-Canel, and his prime minister, Manuel Marrero, traveled to Matanzas at dawn to closely follow the evolution of the event and visited the wounded in the nearby Faustino Pérez provincial hospital.

The incident has so far left about 80 injured and 17 missing firefighters who “were in the closest area trying to prevent the spread,” according to the Presidency.

This incident occurs only three months after the explosion at the Saratoga hotel in Havana that left 47 dead, including a young Spanish tourist.

The deputy director of the Faustino Pérez provincial hospital, Getter Robaina, confirmed to Efe that there are five admitted to the facility, one of them in critical condition.

The center, where a press conference will be held at 7:00 p.m. local time (11:00 p.m. GMT), has received a total of 56 injured so far, while another seven people were sent to Havana for a “merely geographical issue.” , Robaina pointed out, reiterating that there is no saturation in the Emergency Room.

The governor of Matanzas, Mario Sabines, specified that more than 1,000 people were evacuated and that operations continue to transfer those who live in vulnerable places.

The images show helicopters spraying seawater and sand over the burning area to prevent the fire from spreading, as well as actions to cool the rest of the tanks and prevent possible explosions.

The capacity of each deposit is 50,000 cubic meters of crude oil, but the amount they contained at the time of the explosions is unknown. The amount of fuel per tank is comparable to that of 15 Olympic swimming pools.

Both are part of the supertanker base in the industrial area of ​​Matanzas, located almost three kilometers from the Antonio Guiteras thermoelectric plant, the main one in the country.

The base has a lightning rod system, but the discharge was of such magnitude that it was not able to protect it, Rigel Rodríguez, director of the Matanzas Territorial Division of Fuel Marketing, explained to the official Cubadebate website.

The Electric Union of Cuba ruled out that the fire affected the power generation of the Guiteras, which “keeps operating in a stable manner.”

The Forecast Center of the Cuban Institute of Meteorology warned on Twitter that conditions were “favorable for the continued spread of smoke to the west and west-northwest, over Matanzas, Mayabeque and Havana,” in the west of the island. .

In that sense, he recommended that people wear masks and avoid exposing themselves.

Meanwhile, the local media reported the alerts of the meteorologist of the province of Artemisa (west) Jorge Félix Hernández, about the formation of showers and rains accompanied by high levels of pollutants.

The expert recommended avoiding exposure to this rain, protecting domestic animals and not using this water.

CUBA COORDINATES AID WITH THE US

Given the magnitude of the incident, the Cuban government requested international help and advice with experience in the oil issue.

Díaz-Canel thanked countries such as Mexico, Venezuela, Russia, Nicaragua, Argentina and Chile on Twitter, “which have promptly offered solidary material aid in the face of this complex situation.”

“We also appreciate the offer of technical advice from the US,” he added.

Earlier, the Cuban Deputy Foreign Minister, Carlos Fernández de Cossío, confirmed on Twitter that the aid offered by this country will be coordinated with the US.

The US government “offered technical advice, a proposal already in the hands of specialists for proper coordination,” he said.

The US embassy in Cuba reported that it was “in contact with Cuba about the incident in Matanzas.”

“In the meantime, we want to make it clear that US law authorizes US entities and organizations to provide disaster relief and response in Cuba.”