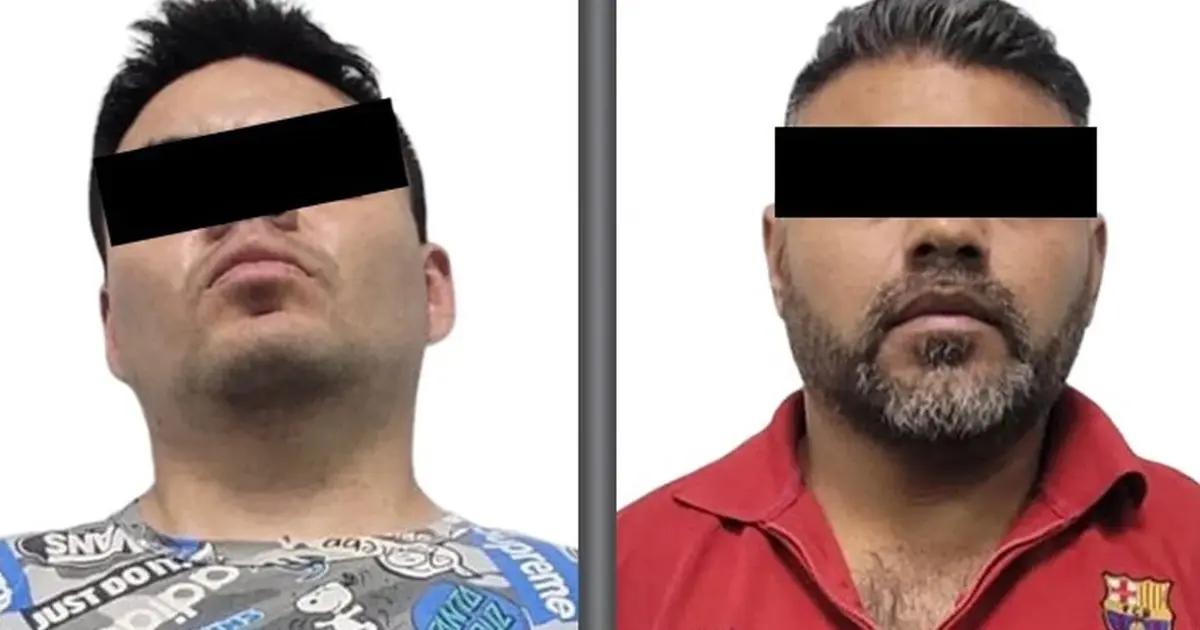 Two alleged members of the group known as Los Barbas were arrested during an operation carried out by members of the Mexican Attorney General’s Office of the State of Mexico (FGJEM) and Municipal Public Security, a criminal group dedicated to extortion and drug dealing in Tlalnepantla, State of Mexico.

The men were identified as Jorge “N,” 39 years old, and Jean Pool “N,” 26 years old, both were arrested on the Mexico-Pachuca highway in the La Laguna neighborhood in the municipality of Tlalnepantla. The facts were reported on Sunday, January 8, and stemmed from a complaint made by an individual who began receiving messages on his cell phone.

Through these messages, cash was demanded in order not to harm the victim’s relatives. Given these facts, the Investigation Police (PDI) carried out investigations to identify the alleged perpetrators.

“From the investigations carried out so far, it has been established that these individuals are apparently members of a gang dedicated to various criminal activities in the municipality of Tlalnepantla, including the sale of drugs and extortion, so the FGJEM continues with the investigations,” the Mexican Prosecutor’s Office said in a statement.

As a result, the authorities confiscated a .22 mm caliber firearm, as well as a Volkswagen vehicle and cash, presumably derived from the crime of extortion. Both men were taken to the Mexican Justice Center to be handed over to the Mexican Public Prosecutor’s Office to determine their legal status.

In the nation’s capital, members of the Mexican Attorney General’s Office (FGR) arrested José Rodolfo Villarreal Hernández, alias El Gato, regional leader of the Beltrán Leyva cartel in San José, Nuevo León. The operation was carried out on Saturday, January 7, and involved members of the Secretariat of the Navy (Semar), the Nuevo Leon State Investigation Agency, and the National Anti-Kidnapping Coordination.

El Gato is identified as a high-ranking member of the Beltrán Leyva criminal group and was even one of the most wanted criminals by the Federal Bureau of Investigation (FBI). Rodolfo Villarreal was transferred to Mexico City’s International Airport (AICM) to be extradited to the United States, which has wanted him since 2013.

Villarreal Hernández was allegedly involved in the murder of a 43-year-old man “for hire.” The victim was Jesus Guerrero Chapa, a lawyer for Osiel Cardenas Guillen, a former head of the Gulf Cartel. At the time, the then US Secretary of State, Mike Pompeo, identified El Gato as the alleged supervisor of the importation of large quantities of marijuana and cocaine into US territory.

On January 4, Edgar “N,” alias El Barrabás, the alleged leader of a criminal group that apparently used members of the Investigative Police (PDI) to transport illicit substances in official vehicles belonging to the Mexico City District Attorney’s Office, was arrested in Mexico City.

The arrest was made without a single shot being fired by members of the Secretariat of Citizen Security (SSC). Initial reports indicated that the alleged ringleader was dedicated to distributing drugs in the Milpa Alta district.

Edgar N. was allegedly in charge of offering bribes to members of the PDI to get them to move the merchandise with PDI patrols. Unofficial information indicated that he was captured along with doses of suspected marijuana.