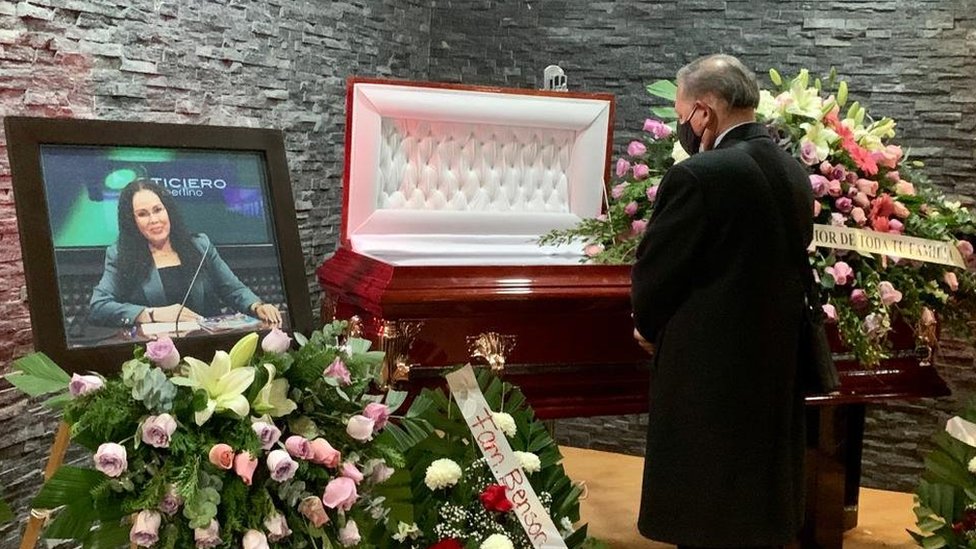 The silence at the wake of the Mexican journalist Lourdes Maldonado in Tijuana it was only broken by the sound of the cameras of those who came to see her off and, at the same time, covered the news as colleagues by profession.

The journalistic union of this border city with the United States was still recovering from the murder of the photojournalist margarito martinez on January 17 when Maldonado was shot in her car in front of her home last Sunday.

Not even a week had passed. Too much even for a city almost accustomed to suffering high levels of violence and for reporters who, from witnessing five homicides a day on average last year, have become victims of them in 2022.

“Lourdes said: ‘Margarito was hunted in his house,’ without knowing that a few hours later they were going to kill her just like her,” she told BBC Mundo, holding back tears in front of the funeral home Rocio Galvan, Radio Formula journalist.

Whoever was her colleague for years as reporters on Televisa remembered Maldonado as a “brave, unfiltered and visceral” woman.

The journalist achieved the attention of the entire country when in 2019 she stood up at a conference before the president, Andres Manuel Lopez Obrador to tell him that he feared for his life as a result of a labor conflict he had with his old company, owned by former state governor Jaime Bonilla, who denied having any connection with the murder.

“But that did not guarantee anything,” lamented Galván.

López Obrador asked not to advance trials or “play politics” and assured that the case will not go unpunished after a “thorough” investigation.

But many of the journalists in this city don’t trust promises. They feel alone and are afraid of the lack of protection they receive to carry out their work uncovering cases of corruption or drug trafficking in exchange for precarious economic conditions.

And one of the brothers from Lourdes addressed them at the wake, Hugo Maldonado.

“It is a disgrace, not only for my family, but for you. I tell them to take care of themselves, that something like this can happen to them at any time, ”said visibly affected, who spoke on behalf of the family to affirm that they forgive the murderers of his sister.

“If you are going to cover the war [como periodista]You buy that risk. The problem is that here in Tijuana they cowardly attack you,” Galván stressed.

But the degree of defenselessness of these professionals was even more evident after it was learned that Maldonado was part of a State System for the Protection of Human Rights Defenders and Journalists that could not save his life.

He accessed it after his vehicle was shot at in March of last year. Among his measures, she had a panic button inside the house to contact the police station in case of an emergency, patrols by agents and permanent surveillance at night.

“It is clear that the system is not saving lives nor is it taking risk away from us,” he firmly criticizes Sonia deAnda, journalist and counselor of the protection program, to which she assures that she joined “to criticize it and expose it in public from within.”

Neighbor to the south of the city of San Diego, in California, Tijuana is a municipality that coexists with the advantages and disadvantages of sharing a border with the United States.

Added to the incessant commercial exchange is the cultural fusion that makes listening to English in its streets one of the most common, as well as seeing large shopping areas or drive thru to taste junk food without getting out of the car in which drivers take refuge among the disorderly traffic.

Against this, its strategic location condemns it to be a battlefield for the drug cartels that want to control the area. In a city of less than two million inhabitants, last year there were 1,932 murders recorded. Neighbors explain that when the channel through which the Tijuana River runs through the city is cleaned, bodies sometimes turn up.

But the Tijuana journalists’ union had more or less managed to dodge this monstrous violence, says De Anda. The last homicide there of a communicator for causes related to his work dates back to 2004: that of Francisco Ortiz Franco, editor of the legendary Zeta Weekly specializing in drug trafficking issues.

“But, after these two murders, journalists in Tijuana think that we have a bullet aimed at the head, that the focus is on us. It is as if we were his target, ”he tells BBC Mundo just after finishing his television program, in which he spoke about his murdered colleagues and the lack of protection.

De Anda affirms that they feel helpless, stressed and undervalued by having to work “in many cases, for 8,000 pesos a month. ($385 dollars) and without employment benefits. Worse than a maquila worker”, she denounces.

“This has put us in a risky situation where we no longer know how to protect ourselves, whether or not to trust the institutions, or how to do it. This is how we are working.”

The tiredness of journalists in Tijuana is really extensible to the entire country. For this reason, dozens of cities hosted protests on Tuesday in rejection of the violence suffered by the sector and that did not hesitate to mobilize.

Mexico is, in fact, the most dangerous country in the world for the press, according to Reporters Without Borders and the Committee to Protect Journalists (CPJ), which in 2021 counted between seven and nine professionals killed, respectively.

In less than a month so far this year, there are already three victims in the country, where more than 90% of crimes against journalists go unpunished.

“If you allow crimes to go unpunished for a long time, you create a very large incentive for people who want to silence the press,” he criticized. Jan-Albert HoostenCPJ representative in Mexico.

Likewise, he highlighted the collusion that exists between public officials, police, politicians and organized crime; and called for “the Mexican State to begin to assume responsibility for the fact that it is very clear that it cannot, or does not want to, protect journalists.”

On Wednesday, the governor of Baja California, Marina del Pilar Avila, He appointed a special prosecutor to investigate the murders of journalists and said that work will be done on a project to reclassify this type of crime with harsher penalties.

BBC Mundo requested an interview with the Baja California State Prosecutor’s Office, but received no response until the publication of this article.

CPJ’s Hoosten made these statements to BBC Mundo at the cemetery where Lourdes Maldonado’s funeral was officiated this Thursday among family and friends. “Fly high, auntie!” one of her nieces exclaimed excitedly when a group of white doves was released.

Very close, the journalist from Tijuana Antonio Maya followed the ceremony to report it in one of the media for which he works. Also very close, an escort discreetly followed the reporter’s movements.

Maya joined the state protection system after receiving threats for having defended a colleague in a confrontation and discovering, she says, to a couple of Americans betyou in a van in front of his house watching him.

For this reason, the State Prosecutor’s Office recommended that he have this protection. BBC Mundo spent several hours with the young communicator to see how the accompaniment of an escort for much of the day for less than a week completely changed his routine.

“I don’t walk on the street so much anymore, I just write, I stay in the car and then I return home. once i arriveI no longer go out in case there is someone outside waiting for us”, recognizes next to the Municipal Palace of Tijuana, while waiting to receive an announcement to go to cover any news or event of the day.

He says that he does feel safer, but accepts with surprising resignation that his destiny may be written, whether he has protection or not.

“I am well aware that the person that it will kill you, it will because he is determined and it is his job, no matter how many escorts you have. That is part of reality”, he tells BBC Mundo sitting in the Monument to the Mother, wallpapered with photos of dozens of disappeared in the city.

That climate of violence, he admits, is somehow always present in their lives. “Here we already have violence so normalized that we take it for granted that every day there will be a death note in the media.”

He doesn’t know how long he’ll have to continue having an escort, but one thing is clear to him: this won’t make him give up his profession. “Although my father told me that this was dangerous, I think that dedicating myself to it is one of the best decisions I have ever made. I like doing journalism have whatever implications it has.”

Journalist De Anda agrees in conviction. “The crimes of journalists in Tijuana have never limited their colleagues in their work. And although they threaten us, some of us say that we are not going to leave. And if you come for me, here I am”he assures.

The kennels of his three cats and his dog Chato they are already empty, after the painful photographs of his pit bull stationed in front of the house waiting for his owner the day after his murder went around the world.

Four days later, the windows of his car shattered by bullets could still be seen on the ground. in a sad image that made it inevitable to remember the loneliness and abandonment that journalists denounce suffering from this city so full of people.