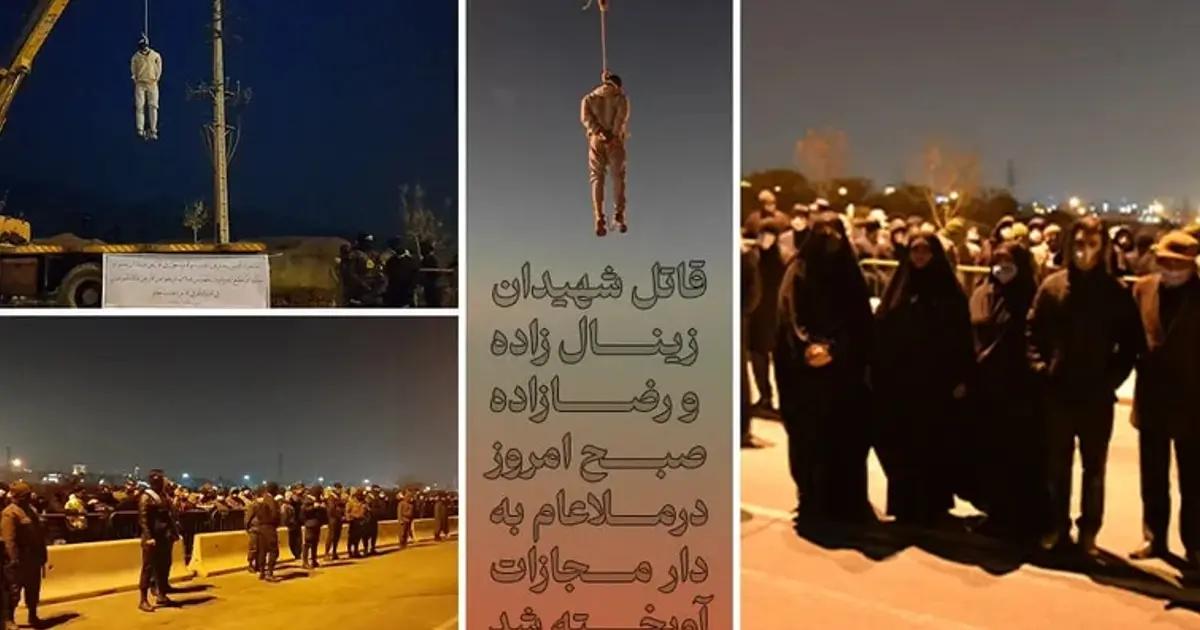 On Monday, Itan publicly executed a second person convicted of involvement in protests that have rocked the country since September despite international outrage over its application of the death penalty to those involved in the demonstrations.

Majidreza Rahnavard was sentenced to death by a court in the northeastern city of Mashhad on charges of killing two members of the security forces.

Footage aired on the state television channel showed one man chasing another and turning a corner, then towering over him and stabbing him when the other had fallen against a parked motorcycle. Another video showed the same man stabbing another person next. According to that media outlet, the assailant, who was Rahnavard, was running away.

The particularity of this execution was that the young man was hanged in public and not inside the prison, reported Mizan Online, the judiciary’s information agency.

It is the second protest-related execution following Thursday’s hanging of Mohsen Shekari, a 23-year-old convicted of attacking and injuring a paramilitary.

Mizan Online also published footage of Rahnavard’s execution, showing a man with his hands tied behind his back hanging from a rope attached to a crane.

“The public execution of a young protester, 23 days after his arrest, is another serious crime committed by the Islamic Republic’s rulers and a significant escalation in the level of violence against protesters,” Mahmood Amiry-Moghaddam, director of the Norway-based NGO Iran Human Rights (IHR), told AFP.

“Majidreza Rahnavard was sentenced to death based on a coerced confession after a manifestly unfair trial and a show trial,” he added.

Monday’s execution is the first in public in the context of protests triggered by the Sept. 16 death of Mahsa Amini, a 22-year-old Iranian Kurdish woman who died after being detained by morality police for violating the strict dress code that women in the country must observe.

Since its creation in 1979, the Islamic Republic of Iran has been rocked by several protests. Still, this crisis is unprecedented in its duration. It occurs in several provinces, involves different ethnic groups and social classes, and includes direct calls for the end of the regime.

The Iranian judiciary said it has handed down 11 death sentences in connection with the protests, described by authorities as “riots.” But activists say another dozen people face charges carrying the death penalty.

In addition, at least 488 people have been killed since the start of the violent protests, according to Human Rights Activists in Iran, a group that monitors the demonstrations. Authorities have detained another 18,200 people.

“No due process. Sham trials. This is how they want to stop protests across the country,” said Omid Memarian, Iran analyst at Democracy for the Arab World Now (DAWIN).

Rahnavard, 23, was arrested on November 19 while attempting to flee the country, according to Mizan.

According to Amnesty International, Mahan Sadrat, 22, sentenced to death after a summary and “unfair” trial on Nov. 3, was transferred on Saturday to Rajai Shahr prison in Karaj, near Tehran, “raising fears of imminent execution.”

He was found guilty of pulling a knife during the protests, which he strongly denied in court.

Amnesty also warned that another young man’s life, Sahand Nourmohammadzadeh, is in danger after he was sentenced to death on November 6 for “demolishing highway railings and burning garbage cans and tires.”

Among others sentenced to the same penalty is rapper Saman Seyedi, 24, from Iran’s Kurdish minority. Another rapper, Toomaj Salehi, who supported anti-regime protests, is charged with “corruption on earth” and could face the death penalty, Iranian judicial authorities confirmed last month.

EU foreign policy chief Josep Borrell said he had spoken with the Iranian foreign minister about the Iranian response to the protests and the new execution and that it had not been “an easy conversation.”

“We are going to pass a very, very tough sanctions package,” Borrell told reporters as he arrived to chair the foreign ministers’ meeting in Brussels.

But human rights activists and NGOs are calling for a more forceful reaction, including severing diplomatic relations with Iran and expelling ambassadors in European capitals.