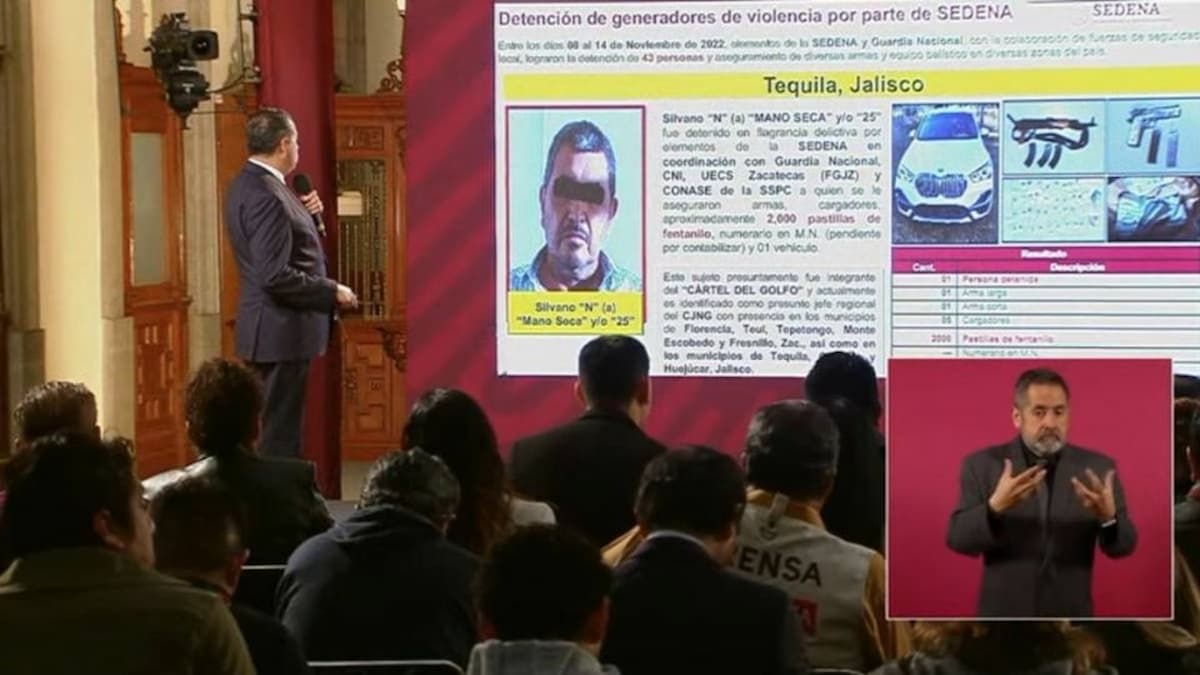 The Mexican Undersecretary of Security, Ricardo Mejía Berdeja, indicated in his report “Zero impunity” that Silvano “N,” regional head of a criminal group operating in the states of Jalisco and Zacatecas, was captured by members of the Mexican Army and the National Guard. The capture took place in the magical town of Tequila in Jalisco.

The arrest was made after the alleged drug trafficker, also known by the aliases of “Mano Seca” and “25”, was hiding in Tequila after intelligence work was carried out by the armed forces authorities, who also conducted ground reconnaissance. The action was carried out thanks to an anonymous citizen report.

As a result, the security forces identified the car in which Silvano “N” was on board, “therefore, he was stopped from proceeding to search, being arrested in flagrante delicto by military personnel.” Inside the vehicle were found:

At the National Palace, Undersecretary Mejía Berdeja highlighted that the alleged criminal leader was captured on November 13, so a week after his arrest, Silvano “N” was already linked to criminal proceedings for crimes against health, operations with resources of illicit origin, carrying a firearm, possession of cartridges and magazines, all of the exclusive use of the Army.

Read more: The war between narcos from CJNG and CSRL in Guanajuato resulted in 15 massacres

The Undersecretary of Security informed that a judge in the case ordered the regional head of the CJNG to be remanded in custody as a precautionary measure. For that reason, he is being held in the Federal Center for Social Readaptation (CEFERESO) number 12 in Guanajuato.

In addition, personnel from the Mexican National Anti-Kidnapping Coordination of the Secretariat of Security and Citizen Protection served an arrest warrant on Silvano “N” for the crime of illegal deprivation of liberty against private individuals, which a control judge issued in the state of Zacatecas.

The arrest of Silvano “N” represents a decisive blow to criminal organizations in the country. This action reaffirms the loyal and institutional commitment of the Mexican Army to watch over and safeguard the well-being and tranquility of the citizens, contributing to the Mexican government to guarantee the peace and security of the population, highlighted the Sedena in a press release.