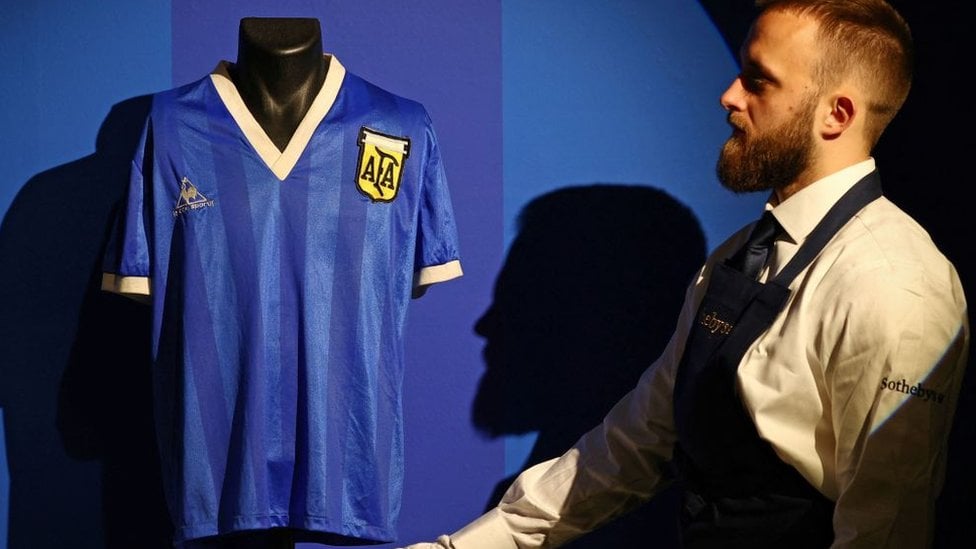 This Wednesday, in a virtual auction organized by the British house Sotheby’s, the shirt that Argentine star Diego Armando Maradona used during the legendary match against England in the 1986 World Cup in Mexico was acquired by an anonymous bidder for US$9.3 million.

After a series of bids that began with a base of US$4 million, the final price was reached, for one of the most coveted items in the history of modern football.

The blue shirt, with a white trim on the neck and the yellow shield on the left shoulder, was used by Maradona during the quarterfinal match of that World Cup on July 22, 1986, in which he scored two of his most remembered goals

The first was the one that was later found to have been scored by hand and was validated by the judge of the match, the Tunisian Ali Bennaceur.

In fact Sotheby’s has put the name “The Hand of God” to the shirt at auction.

The second goal was scored by Maradona after eluding at least six rivals, including England goalkeeper Peter Shilton. It was considered the “goal of the century” by the International Football Federation (FIFA) in 2002.

At BBC Mundo we tell you three unusual facts about this important collector’s item.

1. That was not the shirt with which Maradona should play (nor the Argentine team)

The match against England corresponded to the quarterfinals of the World Cup in Mexico. The match was going to be played in Mexico City, at noon on July 22, with a sunny day forecast.

The previous match of the Argentine team had been for the round of 16 against Uruguay and they had settled with a score by Pedro Pasculli. However, the kit they had worn for that previous game was the blue away jersey, not the traditional light blue and white stripes.

And this is where they come in two versions.

The first – highlighted by the journalist Andrés Burgo in his book “The Party (of the Century)” and an article in the sports magazine El Grafico that quotes the manager of the national team at the time, Rubén Moschella – points out that Carlos Bilardo, the brand-new technical director, had asked the French brand Le Coq to produce lightweight shirts for them to be able to avoid the heat and height of the World Cup matches in Mexico.

Le Coq fulfilled the request for the titular outfit, the striped one. However, for the game against Uruguay, the second uniform – dark blue in color – was made of cotton fabric, which was not only heavier but also more sweat-absorbent, adding more weight to it.

In their account, both Burgo and Rubén Moschella point out that Bilardo, upon learning that against England for the quarter-final match they had to wear the second kit again, asked Le Coq to make a lighter one, but the answer was negative.

So he went to Moschella with an urgent favor: to find in Mexico City blue t-shirts with the logo of the French brand, which had to appear by contract.

Finally, after a stroll through the famous Tepito market, Moschella found two models of T-shirts, a lighter shade of blue and a little lighter. Although Bilardo had doubts, he finally chose the one that is known worldwide.

And after an artisanal process of sticking shields and printing numbers done by the employees of Club América in Mexico -where the southern team was staying-, the shirts were ready for the match against the English.

The second version – whose main source is Oscar Ruggeri, one of that team’s starting defenders – indicates that the reason why new jerseys were made was not because of Bilardo’s order and the heat problem, but because they had been left without shirts after they exchanged them with their Uruguayan colleagues after the round of 16 match.

When it became known that the Sotheby’s house was going to auction the shirt, several versions came out to deny that it was really the shirt with which Maradona scored two of his most emblematic goals.

And all for one reason: that July 22, Maradona wore two shirts. One for the first half and one for the second, which is when he scored both goals.

The star’s relatives, including his daughter Dalma and his ex-wife Claudia Villafañe, point out that the shirt that is in Sotheby’s is probably the one that Maradona used in the first half.

“You change the first half because you can’t imagine what’s going to happen in the second. Obviously, the one from the second half is much more valuable than the one they auction”, said Dalma.

However, Sotheby’s stated that it did a digital evaluation of the shirt to determine that it is the one that Maradona had used in the second half, which ended up in the hands of English defender Steve Hodge after an exchange.

“Part of the challenge in evaluating the jersey was identifying the jersey with the two historic goals. As part of this effort, Sotheby’s worked with Resolution Photomatching to match the jersey to both lenses, examining unique details in various elements of the item, including the patch, stripes and numbering.”

Hodge has said on several occasions that he got the jersey as a souvenir once the game was over and he met Maradona on the stairs leading to the locker room, where he asked him to exchange uniforms.

The price paid for the shirt makes it the sports garment for which the most money has been paid in the history of sports.

That record was held by a jersey of the famous American baseball player Babe Ruth.

For the shirt that the so-called “Great Bambino” used during his time with the New York Yankees, about $5.2 million dollars were paid.

In addition, it exceeded the price of the most expensive object of sports memorabilia until now: in 2019, $8.8 million was paid for the original manifesto of the Olympic Games.