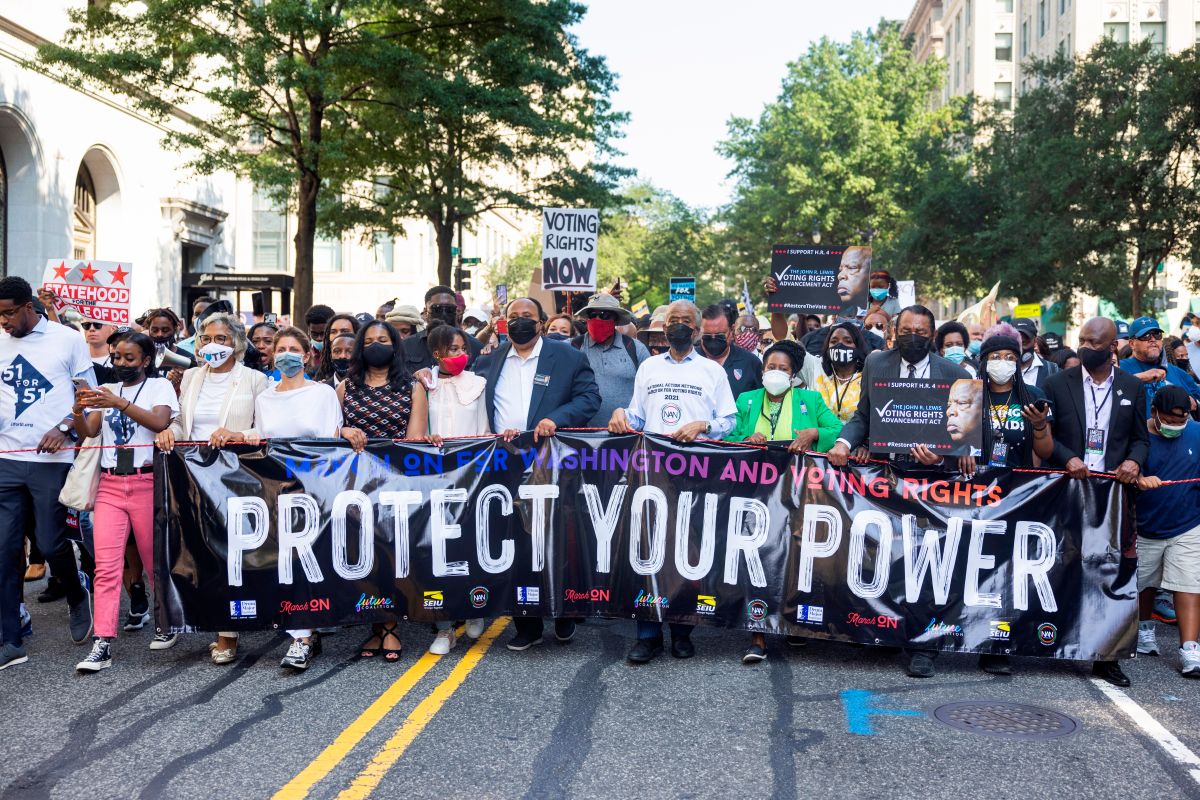 Some 58 years after Reverend Dr. Martin Luther King Jr. gave his “I have a dream” speech at the first march in Washington, his son, Martin Luther King III, and other activists and advocates participated in the Voting Rights March in the nation’s capital on Saturday.

The demonstration held in Washington DC and also in other cities in the United States asked the federal government to protect and expand voting rights.

People gathered for the Washington march early Saturday, in a rally that lasted into the afternoon. An estimated 50,000 people attended, according to WUSA.

The demonstration in the capital took place in a vindictive and at the same time festive tone, with shouts, songs and dances through the streets of the center until reaching the Mall, the esplanade that goes from the Capitol to the Lincoln Monument, in honor of President Abraham Lincoln (1861-1865).

The participants in the protest carried banners with messages such as “Protect civil rights” or “It’s 2021 Why do we still have to fight for the right to vote?

58 years ago, brave Americans joined together for the #MarchOnWashington to demand freedom and justice for all.

A claim to the Senate

This year’s protest aims to put pressure on the country’s Senate to pass the John Lewis Civil Rights Advancement Act, which increases the power of the federal government to block any legislation that is discriminatory.

The bill to protect the right to vote received the go-ahead this week in the lower house, but it has a difficult time in the upper house, where most Republicans oppose it.

58 years after the #MarchOnWashington, Americans are marching again today for our democracy. With state laws disenfranchising voters and making it harder to vote, we need the Senate to pass the For the People Act and the House-passed John Lewis Voting Rights Advancement Act!

In parallel, numerous states in the hands of conservatives have passed legislation to restrict the vote of minorities, as is the case in Texas, where on Friday the state lower house gave its approval to a rule whose critics warn that it makes it more difficult African Americans and Latinos to vote.

This was explained by the son of Luther King Jr., Martin Luther King III, in his speech during the protest in Washington.

“How do you stop certain people from voting without explicitly saying they can’t vote? You reduce the suffrage by mail, you reduce the voting centers, the hours to vote. Then you make voting on weekdays, ”Luther King III listed, adding that this especially affects African Americans and Latinos.

The activist warned that the current moment is dangerous because in a matter of weeks the state congresses are going to design the map of the electoral districts and they are going to do it in such a way that, in many cases, they will put obstacles to the vote of minorities.

In 2022, the mid-term elections are scheduled to be held in the US, where, among others, the two houses of the country’s Congress will be renewed.