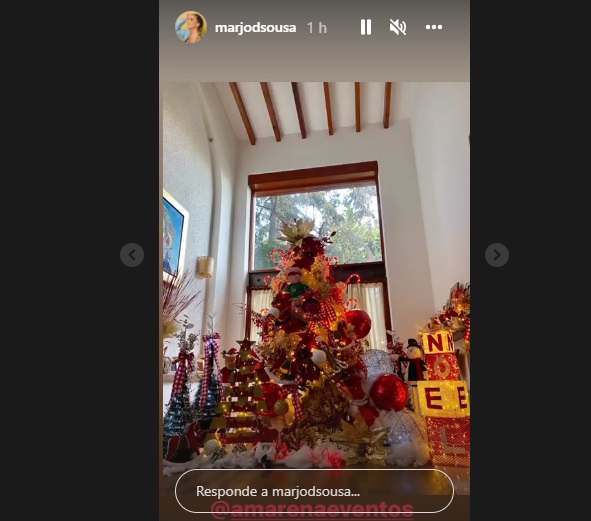 More than a month after celebrating the Christmas, the Venezuelan actress Marjorie de Sousa decided to decorate her house at once and not wait any longer, since It is one of the seasons of the year that you like the most.

And that’s why he boasts in his Instagram Stories who has already decorated his house to enjoy the Christmas spirit for a longer time, in the company of his little son Matías, which he had with the Argentine actor Julián Gil.

Although the antagonist of “La Desalmada” loves Christmas, her thing is not exactly decoration, so she decided to hire a specialized company to decorate your home in Mexico City, where he has resided for several years.

And his spending on decoration was worth it since his house looks like a Christmas movie, each space is adorned that makes you see the dreamlike environment.

Every corner of your house shows off the Christmas decorations that were placed and selected by specialists, who did not pay attention to every Christmas detail.

And of course the Christmas tree shines in all its splendor full of red spheres, lights, ribbons, canes and other Christmas decorations.

Christmas gifts could not be absent in the decoration of the house of the beautiful Venezuelan actress, who is now ready to celebrate one of the most important times of the year for the Catholic and Christian world.

The Venezuelan actress shared the images of her house full of Christmas decorations, with music as the backgroundl “All I Want for Christmas”, of the American singer Mariah Carey, which has already become a classic of the Christmas season.

The video was also enlivened with the classic “Jingle Bells”, which marks the beginning of the Christmas season, although for Marjorie it was several weeks ahead.

Marjorie has stated that Christmas has always been her favorite time of year and now it is even more so since her son Matías was born four years ago.

“We like to celebrate, decorate, Matías loves Christmas. He spends the whole year watching Christmas cartoons, it is something very important to him ”, declared De Sousa during an interview with the People en Español site.

Wearing some vinyl leggings, Marjorie de Sousa shows off in front of the mirror