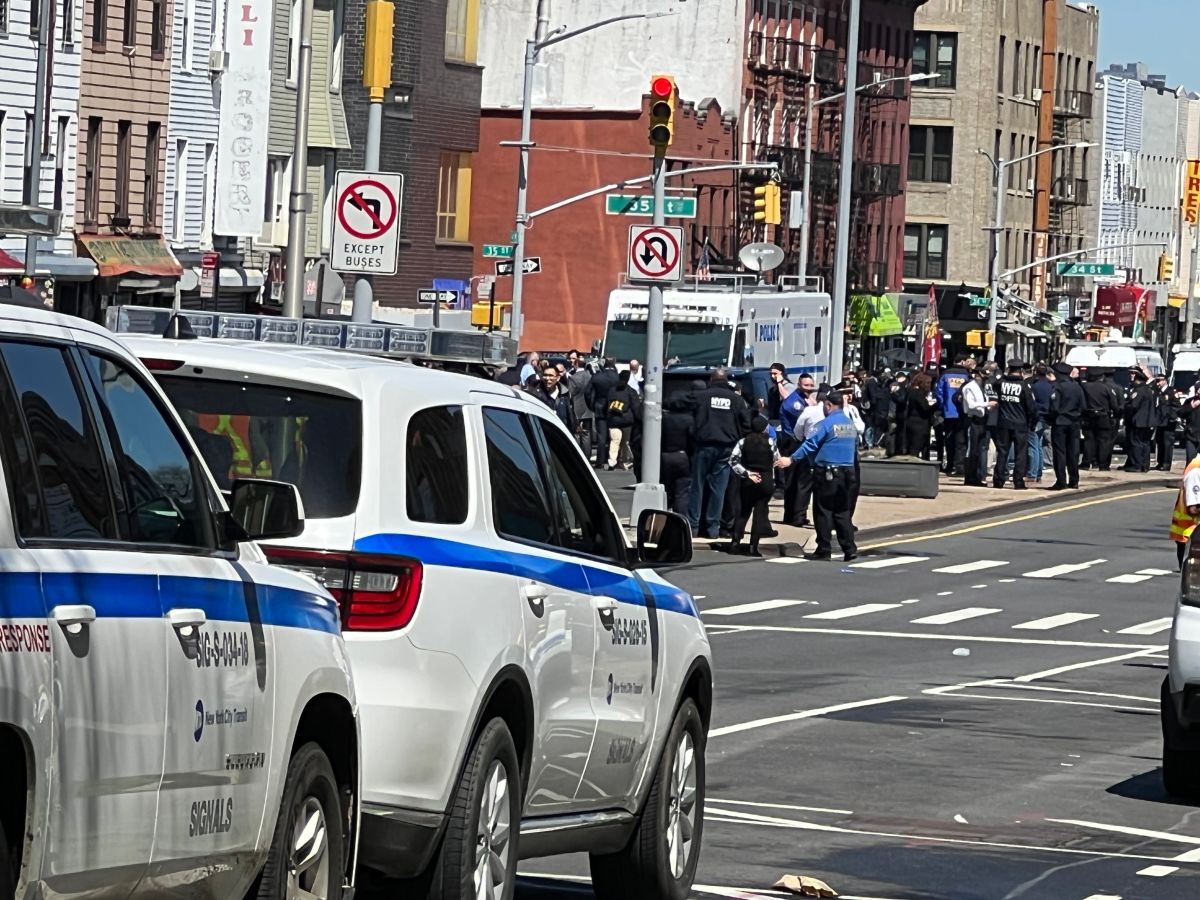 Dozens of passengers traveling this Tuesday morning in the New York Subway N Line, in brooklynexperienced moments of terror, after a man wearing a gas mask activated a device that filled one of the wagons with smoke, and then shoot indiscriminatelyat a time when the apparatus was approaching the station of 36th street with 4 avenuein the neighborhood of Sunset Parkwith a large Latin presence.

As confirmed the fire departmentthe incident, which occurred at 8:24 a.m.., left as balance 16 wounded, 10 of them shot and six with blows and bruises, caused in the midst of the stampede that triggered the shooting, when the train opened its doors in 36th street stationheading towards Manhattan.

the violent attack occurs just as New York City is facing an insecurity crisis, in which, according to police figures, crime in the subway It has increased by more than 68% this 2022, and daily passengers report all kinds of aggressions.

“Suddenly it became difficult to breathe and see. She did not see anything nor did she understand what was happening and they began to hear screams of fear and then many shots“Assured a young man who was traveling in the car, at the time of the event. “Then we all ran out and there were people bleeding. It looked like a terrorist attack. It was like a horror moviebut all filled with much confusion and anguish.”

Towards noon, NYPD Police Commissioner, Keechant Sewell, assured that the motives that led the attacker to commit the act are still unknown, and although he emphasized that the investigation is ongoing, it is initially presumed that it was not a terrorist attack. However, she was clear in saying that for now nothing can be assured with full certainty and she shared the information that she has the NYPD.

“As the train pulled into the station, the subject put on a gas mask. He then opened a canister that was in his bag and then the car began to fill with smoke. After that, he started shooting, ”he assured. the Commissioner. “The suspect was in the train car, the shooting started in that car.”
Despite the intense police operation that sparked the incident, which resulted in the closure of train stations and streets near the site of the attack, and which included an extensive police presence and inspection work in the subway tunnels and nearby streets, the Police chief revealed that the suspect he fled and has not been arrested.

The NYPDwho is reviewing multiple surveillance cameras, described the subject as a black male, about 170 pounds, of heavy build, wearing a gas mask on his face and wearing a green vest and gray sweater.

Also, FBI agents and members of the Joint Terrorism Task Force who arrived in the area, inspected nearby businesses, spoke with witnesses and have been reviewing surveillance images, but as of press time they had not revealed additional data.

On the state of health of the 16 wounded, who were transported to nearby hospitals, the acting FDNY commissioner, Laura Kavanaghreported that although most have injuries that are not life-threatening, five are in a more difficult situation.

“Ten of those patients have gunshot wounds right now and five are in stable but critical condition,” Kavanagh said, adding that other passengers suffered smoke inhalation and panic attacks.

Another detail revealed by the authorities was that in the place the presumed weapon that the suspect would have used and a bag were recoveredwhich contained unused smoke canisters and fireworks, and despite rumors of unexploded ordnance in the area, the NYPD confirmed that the area was clear of such units.

Governor Kathy Hochulwho mobilized to Sunset Park, along with the heads of the NYPD and the Fire Department, asked New Yorkers to be alert.

“This individual is still on the loose. this person is dangerous… This is an active shooter situation right now in New York City,” said the state president.

In addition to the police presence in the area, which forced two neighboring schools to remain closed with the children inside, in order to protect their integrity, and the suspension and delay in the service of trains on the D, N and R lines, in BrooklynFor several hours, police helicopters hovered over the neighborhood.

New York Mayor Eric Adamswho did not go to the area, because he was diagnosed with COVID-19, shared a video message, where he claimed to be working hand in hand with the authorities to find the whereabouts of the aggressor, and where he sent a message of encouragement to the new yorkers.

“We will not allow New Yorkers to be terrorized by even one individual. The NYPD is searching for the fugitive suspect and we will find him, but we ask the public to come forward with any information that may assist us in this investigation. They can simply call (800) 577-TIPS, (800) 577-TIPS. We need your helpAdams said.

The shooting at the station increased the nervousness among the residents of Sunset Park at the insecurity that reigns in the Big Apple, and they called for more effective actions by the police and the authorities.

“I think that the police should have more of a presence on the trains and in the streets. What happened today is not something new, nor is it something that should surprise us, because things are very insecure everywhere and if a complete security plan is not implemented, there will be more injuries and deaths, “said the Guatemalan Edgar Garciawho has lived in Sunset Park for 22 years.

The Latino worker, who drives a car, said he was “dismayed” to learn that his family and neighborhood friends may have been the victims of the shooting.

“This is the line we all depend on, and if we can’t be safe in the subway, what will happen to this city,” said the immigrant, who insisted on increased police presence. “As much as it may seem, there needs to be police on every train, inside and out on the streets. We are at a point where it is the only way to stop crime.”

Likewise, Edwin Tecuanhuehue22, assured that although the subway incident generates greater “fright” due to the massive nature of the event, his neighborhood in recent months has become an increasingly dangerous place, where shootings and insecurity prevail, so which called for urgent action.

“We can’t go on like this. This is getting more and more insecure, and it is very scary to know that one can be killed not only on the street but also in the subway. I think more effective police are needed,” said the Mexican.

Laura Espinozawho was very distressed not only because of the attack but also because of the emotional health of her children, whom she was waiting for to leave a school near the area of ​​the shooting, also stressed that in addition to a greater police presence, there is an urgent need for investments in a disadvantaged community such as Sunset Park.

“Today we see the Governor, the politicians and the NYPD commissioner coming here, because this happened on the train, but every day these shootings and acts of insecurity they pass by and he does nothing to stop them. This shooting is not new, but since we are the people of a poor community who suffer from it, they do not solve it with actions that are already urgent,” said the Ecuadorian mother.

“We need to see more police officers who do their jobs well.Because when you see more police officers, but when they act with limits, you feel safer, but we also need more investment in programs, in aid, in education, in housing, in jobs. We are not asking them to give us food, but to improve the options for everyone,” said the Ecuadorian. “It is now urgent that the city and the rulers understand that it is not enough to come here today, but that they make sure that this does not happen again. I have lived here for 20 years, and these violent events are happening more and more frequently now. I hope they do something.”

Mary Molinarwho daily uses the 36th Street train to get to work in Manhattan, was shocked by the shooting and said that “if the authorities do not put a stop” to the criminals, this year there could be similar events and even worse. , and suggested increased inspections at all entrances to the subway and even weapons detectors.

“This new mayor has been here for three months and the City is worse off. He says that he’s not going to let them terrify us, as if we haven’t been terrified all year. I think he has to take a hard line and stop talking so much, like the Governor, and put more police to take care of us, to protect good and hard-working people”, said the mother of the family. “If you don’t do things that are really useful, the criminals are going to be the ones who rule in New York and we will no longer know if when you take the train to go to work or go to the supermarket, that will be your last day because it can end one dead”.

Police ask the community for help