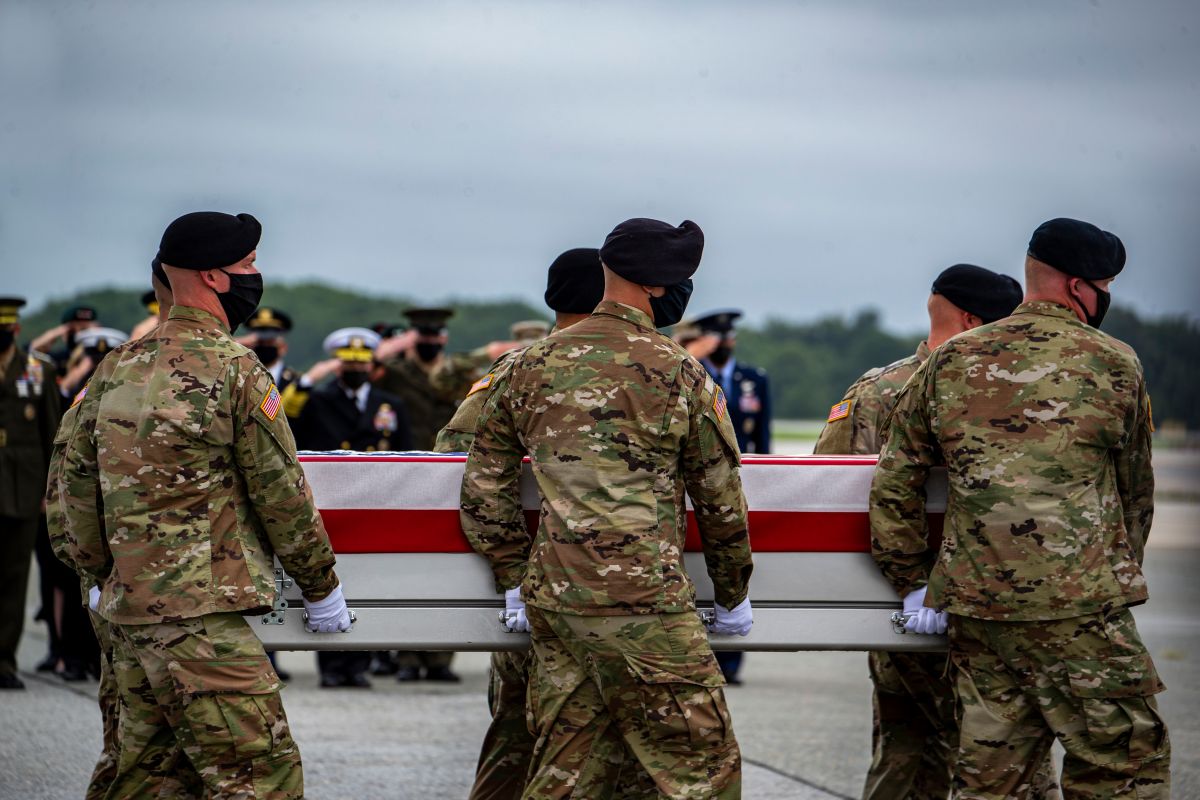 The body of a US Marine killed in a suicide bombing in Afghanistan returned home in Massachusetts on Saturday, on the 20th anniversary of the 9/11 terrorist attacks on the United States that led to America’s longest war, reported WCVB from Boston.

The Sargent Johanny Rosario Pichardo died in the Aug. 26 bombing near Kabul airport, where people were being evacuated amid the Taliban takeover of Afghanistan.

A dozen other American service members and 169 Afghans died as people struggled to get into the airport and on flights out of the country..

Comrades in the Marine Corps, as well as state and local first responders, stood their ground as the plane carrying the Rosario Pichardo arrived at the hangar.

The family of Rosario Pichardo, A native of Lawrence, she paid her respects at the airport before the casket was placed in a hearse. His mother could be seen kissing his coffin.

💔 The mother of USMC Sgt. Johanny Rosario Pichardo kisses her daughter’s casket as it arrives in Massachusetts for the final trip to her home of Lawrence. Sgt. Rosario Pichardo died in the Aug. 26 bombing near the Kabul airport. https://t.co/7gnh5cKeSO pic.twitter.com/Bcnwrm8Ln4

The family of Rosario Pichardo She was accompanied by the Mayor of Lawrence, Kendrys Vasquez.

A procession that included Marines, state and local police, firefighters, and city officials escorted the hearse with its flag-draped coffin down Interstate 93 North to I-495 North and Route 114 West, before arriving at Farrah Funeral Home in her hometown of Lawrence, which is near the New Hampshire state line.

Boston firefighters hung an American flag from a ladder truck as the procession left Logan Airport at approximately 12:35 p.m. First responders, veterans, and the public saluted the wreckage of Rosario Pichardo from the highway overpasses, and many others were seen saluting the downed Marine from the side of I-93.

Then, a funeral mass will be held on Monday morning in the church of Santa María de la Asunción for the family of Rosario Pichardo and other guests.

On Tuesday, there will be a public viewing at Veterans Memorial Stadium next to Lawrence High School, where he graduated. Rosario Pichardo, who was of Dominican descent. The sergeant will be interred at Bellevue Cemetery, in a section reserved for military veterans.

Rosario Pichardo and the other soldiers killed while helping to evacuate Afghans and Americans at the gate of the Kabul airport received the Purple Heart last week.