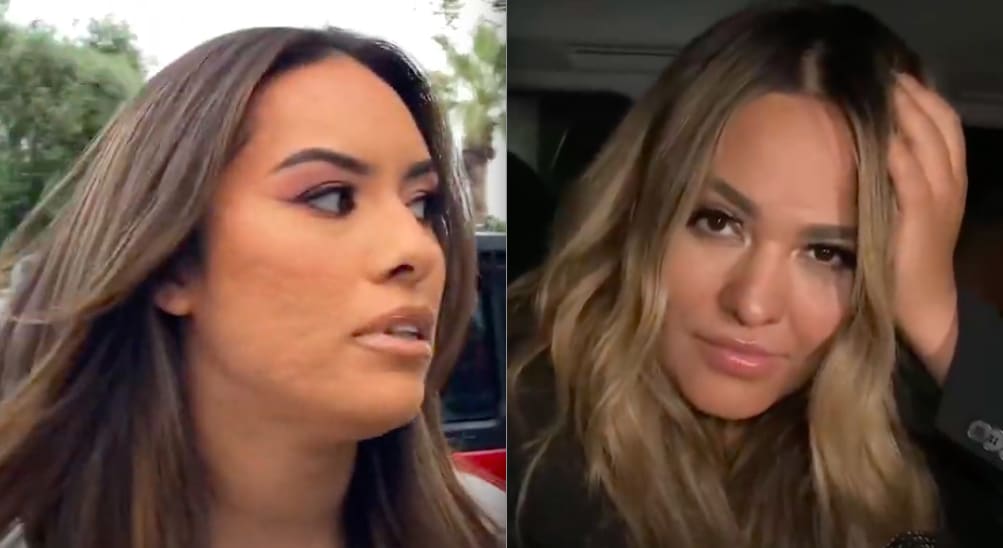 The controversy continues: They accuse Mayeli Alonso, Lupillo Rivera‘s former partner of hitting the publicist of his former partner Daisy Cabral, however, followers affirm that it is only a strategy of Daisy Cabral to be able to attract attention, arguing that even several of them saw the woman “fall down the stairs” to recreate the blows.

Since Daisy Cabral filed a lawsuit against Lupillo Rivera’s ex, Mayeli Alonso for breaking her employment contract, even filing a lawsuit in a Los Angeles court, this because she claimed that Mayeli owed her more than a million of dollars, things do not seem to improve and this time Mayeli has been involved in one more scandal.

It was this August 2 when it became known through the account of Javier Ceriani that the businesswoman and ex-wife of Lupillo Rivera, Mayeli Alonso had beaten the publicist of her former partner Daysi Cabral during an event, stating that she even “bit the eyes and nose ”causing several injuries to his face.

In the photograph, also shared on the program account Gossip live, the following could be read in the caption of the photograph: “They accuse #mayelialonso of having hit his former partner’s publicist with a nose and eye stick, and with the controversy unleashed, the two tell us their version of a possible lawsuit.”

On the other hand, the Instagram page of @ chamoni3 brought out a video where the program’s hosts Tell me what you know and they argued about this matter, where they accused Mayeli Alonso of hitting Daisy Cabral’s publicity, before this, the driver Lucho Borrego affirmed that Daisy Cabral’s publicist came terrified to tell him what had happened with the businesswoman.

“I saw Daisy Cabral on Saturday morning, just after this event,” the driver began: “And there also came Mrs. Rosemary de La Rocha, publicist for Daisy Cabral (the woman who was allegedly attacked by Mayeli Alonso) and came telling absolutely terrified of what happened to Mayeli Alonso ”.

“A woman came to yell at him hysterically and she fell with a slap”: Mayeli Alonso is accused of hitting Daisy Cabral’s publicist

Later, the journalist Lucho Borrego from the program Tell me what you know begins to tell how things supposedly happened between Mayeli Alonso, who is accused of hitting Daysi Cabral’s publicist: “According to what she tells me, it is that she was in the presentation of a group and a woman arrived as hysterical to yell at her head on, that she didn’t know who she was or why she was yelling at her ”.

“And only when he slaps him, is when he realizes that it is Mayeli Alonso, supposedly he was telling Daisy and me, and in that Daisy responds that he has to file a complaint for assault, apparently this was a spontaneous situation , and that he told me just because I was there ”.

“I was recording it”: Mayeli Alonso is accused of hitting Daisy Cabral’s publicist

It should be noted that these events, in which Mayeli is accused of hitting Daisy Cabral’s publicist, happened at a concert by Grupo Firme, where, according to the words of Mayeli Alonso for the program of the host Javier Ceriani and Elisa Beristain, both were in the VIP area and that the woman was the one who was recording Mayeli Alonso.

After these words from the driver Lucho Borrego, now his partner Juan Manuel commented that he had spoken about it with Lupillo Rivera’s ex, commenting on the following: “I spoke with Mayeli precisely and she explains to me that yes, she was indeed there in the front row looking at Grupo Firme and suddenly she sees that behind there is a person taking videos and photography, and in this case it was Daysi Cabral’s publicist ”.

Why didn’t anyone do anything? They react to the video where they accuse Mayeli Alonso of hitting Daisy Cabral’s publicist

After this, the driver commented that due to past experiences, where Daisy Cabral spread videos about Mayeli Alonso to make her look bad, the businesswoman kindly asked him to stop recording her: “Then she approaches him and says that she kindly asks him to this publicist who stops recording and then it turns out that Mayeli put her fingers in his nose, which gave him a few blows ”.

However, the question that everyone could have was, why did no one do or see anything? Before this, Juan Manuel commented: “But, I say one thing, if that were true, the police would have arrived and removed Mayeli” However, with that, much was argued in social networks that they saw the publicist even fall down the stairs to simulate the blows that Mayeli supposedly gave her. Filed Under: Mayeli Alonso Accused Of Hitting Daisy Cabral’s Publicist

Did the publicist fall down the stairs to frame Mayeli Alonso?

“In Chamonic’s account, there are people who are saying that they saw the publicist apparently falling down some stairs and that was where she got the blows, or the bruises,” said the driver of Tell me what you know Faced with the problem that Mayeli Alonso was accused of hitting Daisy Cabral’s publicist.

To end all this, Alex Rodríguez commented that for him it was all about an advertising strategy on the part of Daisy Cabral, since it would not be the first time that the former partner of Mayeli Alonso did this kind of thing to discredit her and make her look wrong, listing the infinities of things that the businesswoman has done against Lupillo Rivera’s ex. YOU CAN SEE THE VIDEO HERE

Karizma Rivera, daughter of Mayeli Alonso and Lupillo Rivera, “shuts up” Daisy Cabral after speaking ill of her

The battle raged! Karizma Rivera, daughter of Mayeli Alonso and Lupillo Rivera, explodes against her mother’s ex-associate, Daisy Cabral and asks her through stories on social networks to stop messing with her family that “enough damage has done to her”, users affirm that Daisy He is envious of Lupillo Rivera’s ex.

It was through Instagram stories where the pitched fight between Mayeli Alonso’s eldest daughter, Karizma Rivera, against her ex-partner Daisy Cabral, and that everything was detonated after Daisy called Mayeli “drunk” in her networks social, citing what appeared to be a note regarding Lupillo’s ex. Filed Under: Mayeli Alonso Accused Of Hitting Daisy Cabral’s Publicist

In her stories on Instagram, Daisy Cabral seemed to be sharing a video of Mayeli Alonso with a man, in which she wrote the following: “The mother drunk in one corner and the younger girl in another with a man stripping on a table in public , but I am the danger to your children. “

Faced with these statements, Mayeli Alonso’s eldest daughter, Karizma Rivera, exploded against her mother’s former associate, Daisy Cabral, asking her to stop messing with her family: “Mrs. Daisy, I’m going to ask you to please never refer to My by no means, ”began the young woman, also a daughter of Lupillo. Filed Under: Mayeli Alonso Accused Of Hitting Daisy Cabral’s Publicist

“You have already done a lot of damage to my family” Karizma Rivera, daughter of Mayeli Alonso, explodes against Mayeli’s ex-associate, Daisy Cabral

“You have already done a lot of damage to my family, we are tired of you, never refer to me or my brother and less to judge my mother’s work with us, so please keep my brother and me away from their problems and Matters, please, who do you think you are to say something. Your fame is hungry ”. Filed Under: Mayeli Alonso Accused Of Hitting Daisy Cabral’s Publicist

After this forceful response from Karizma Rivera, against her mother’s ex-associate, Daisy Cabral, various followers of the @ecandalo_o account, which uploaded the stories, began to show themselves, arguing that they were already messing with Mayeli’s children Alonso was something already stronger:

“Picking on the kids is already a lot, isn’t it?” followers react to Karizma Rivera’s response

“Picking on the kids is already a lot, isn’t it? That woman with the desire to want to scrub Mayelia does not mind messing with the children, what a horror ”,“ I think Daisy screwed up with the children, and I completely agree that she is only looking for fame, why? it’s her? Before I spoke of Mayeli, did anyone know her?

On the other hand, followers affirmed in Karizma Rivera’s answer that Daisy Cabral was envious of Mayeli Alonso: “Daisy looks like she envies Mayeli, one thing is the problems, characters from woman to woman and another is to mess with the children, Daisy he’s dropped so low that he’s really hungry for fame. ” Filed Under: Mayeli Alonso Accused Of Hitting Daisy Cabral’s Publicist. Some images of this note come from this and this videos