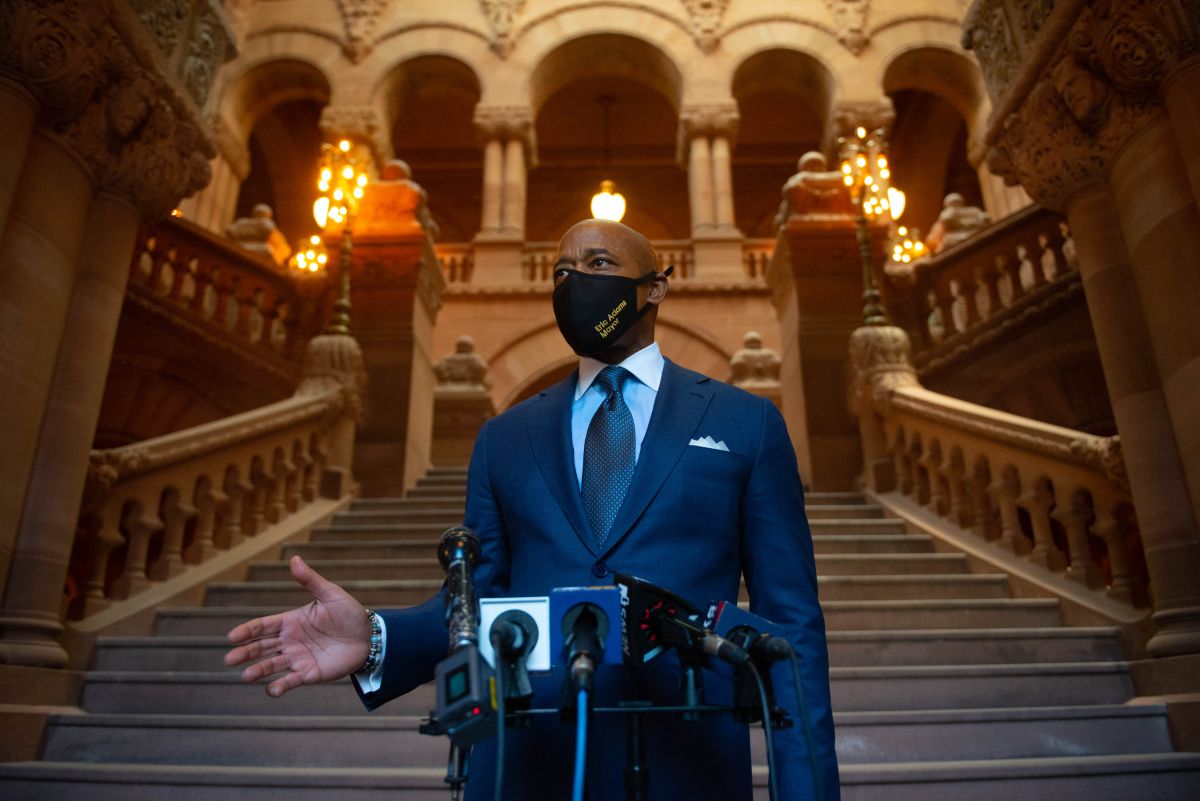 the mayor of New York Eric Adamswho a few weeks ago announced his plan to reduce crime in the Big Apple, met this Monday with the leaders of the Legislature, to ask the state government for help, with changes in some laws of the penal system reform, which he assures, have increased the wave of violence that plagues the city. The mayor maintains that the reform laws to bail bondsincrease in the age of criminal responsibility and discovery of criminal records, have put dangerous people on the street who have ended up committing crimes, an indication that defenders say is not based on reality, since only the 4% of those released without bail have reoffended and be arrested.

Although conversations with Senate President Andrea Stewart-Cousins and the head of the Assembly, Carl Heastiepassed in a friendly manner, according to the politicians themselves, and the commitment to continue holding new conversations to find tools that help reduce the crime wave in the five counties was left open, albany has remained in defending the reforms made.

After his day in The state capital, Adams assured that it is clear to him that what happened on Monday is just the beginning of the dialogues with Albany, where he hopes that his cry will be heard in some way. However, he warned that if he does not receive the help he asks for, with the change in laws (seen by defenders as an act of justice with poor and backward communities), it will be more difficult for him to restore security to the City, but will work to meet that obligation.

“I shared my thoughts, they shared their thoughts and it was a very healthy dialogue… we will focus on doing what we can to keep our city safe,” he said. the mayor of new york. “If they help me with this, I think we can do more things, but if they don’t help me with the things that I highlighted in my safety plan, I still have an obligation to keep the city safe.”

After his meeting with Albany leadersLike other state politicians, Adams gave his word to New Yorkers that he will not let the city continue with rampant crime, and that if Albany does not support him with what he asks, he is prepared.

“That’s why I implemented the Anti-Weapons Unit, that’s why we’re going to make sure we follow the courts to fight crime… I can’t turn around and say: ‘Since different parties didn’t help me, then that’s why now the city ​​is like this. No, I do not accept that,” said the president. My job is to keep New Yorkers safe, it’s my job. If I get help from other places, that’s fine, but without that help, I still have to make sure New Yorkers are safe and I’m not going to use any excuses. We are going to have a safe city.”

Adams was adamant that lawmakers consider amending the state’s recent bail reform law, allowing judges more flexibility to hold someone before trial based on a perceived threat to public safety, something advocates say it would once again open the door to abuse and discrimination among the poor, Latinos, and blacks.

“We have to make sure we close the loopholes in the law that allow dangerous people to be on the streets.. We are using this time to identify everything that is wrong with the criminal justice system, and more than that, and that is precisely what my crime plan points out,” said Adams.

The president mentioned that in his conversations with Albany, in addition to talking about security, he talked about Earned Income Tax Credit, universal child care, loans and other issues. “There are so many issues that we have to analyze that I have to navigate here. That’s how it’s done,” Adams said.

The leader of the Senate He assured that the conversation with the Mayor was positive, but he showed that although solutions to crime must be sought, moving back the laws requested by Adams is not the plan.

The Assembly Leader, Heastie, added: “The conversation was not about agreements or about disagreements. We know we have work to do with the Mayor, and how to work together. We have the same goal of keeping the city safe and we need to have conversations.”

After his visit, the Assemblywoman Latrice Walker of Brooklynasked the Mayor that instead of requesting that the criminal reform laws be reversed, he invest in the prevention of violence.

“Today we are telling our mayor that instead of wanting to reverse a successful criminal justice policy, we need him to invest more resources in the same services to make bail reform an even bigger success,” said the mayor. politics.

The Legal Aid Society He appreciated that the leaders of the Legislature have expressed their right to the regressive changes to the bail reform and the increase in the criminal age, and assured that those changes should not be moved.

“Add a dangerousness provision to the existing bail statute only move more Black and Latino New Yorkers through our broken and punitive criminal legal system, fueling mass incarceration. Going back to a system where New York incarcerates more young people won’t work because it never reduced crime or benefited public safety in the 100 years before Raise the Age reform or bail was passed,” Legal Aid said, via of a statement.

“Albany legislators, responding to their constituents’ cries for immediate action, did well to introduce sweeping changes to a system that has historically failed to reduce crime and recidivism. Legal Aid Society stands in solidarity with Senate Majority Leader Andrea Stewart-Cousins, Assembly Speaker Carl Heastie, and other lawmakers who are prioritizing communities over cages and age-appropriate responses. teenagers,” they added.