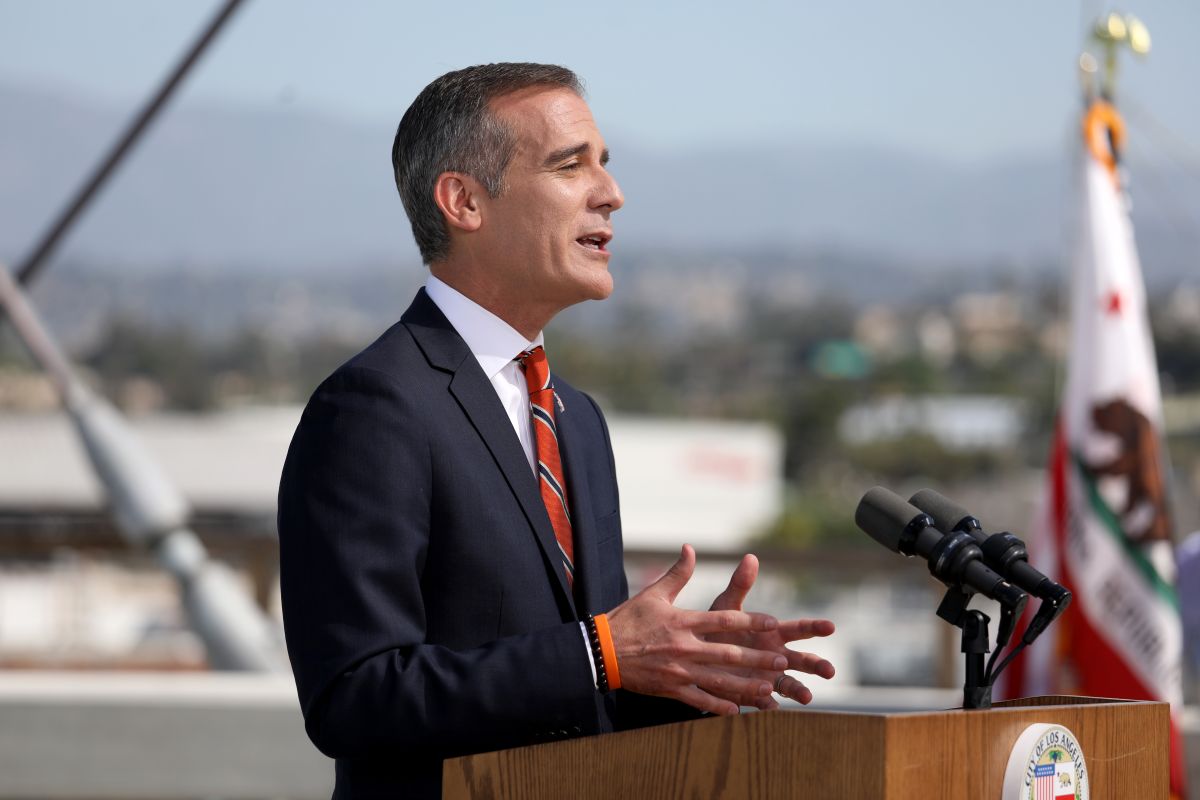 From the 6th Street Bridge under construction, Mayor Eric Garcetti said as he gave his latest status report on the city of Los Angeles that his goal is to deliver next week a stronger-than-ever budget plan and unparalleled infrastructure in the country with a road to accommodate people.

But he stressed that the budget faces two major problems, “the city needs to be safe and provide services effectively.”

He specified that the city is in the process of being cleaner. “This year we plan to hire 800 new cleaning workers.” Last year we hired 100 youth just out of incarceration as well as former homeless.

“Right now, it takes 7 days to respond to requests to clean up illegally dumped trash. We want to reduce that wait to 3 days.”

The Mayor Garcetti acknowledged that during the pandemic, crime spiked across the country along with the mental health crisis.

However, he said that last year, the Los Angeles Police Department, through its weapons purchase program, took 9,000 off the street and doubled the number of seizures of homemade weapons, linked to 19 homicides.

“In total, since 2013, we have removed nearly 68,000 dangerous weapons from our streets, and homicides are down 7% from last year.”

He acknowledged that not enough housing has been built for the people of Los Angeles, but said that in the 9 years of his administration he has made progress.

He said he was proud because they have doubled and redoubled the budget for the homeless, and they are going to repeat it this year with more than $1,000 million.

“I challenged whoever comes after me to do what they can to increase that number until homelessness is a distant memory.”

He pointed out that they built ten small towns of houses for the homeless population in just over a year, including the largest in the country, thanks to Councilman Kevin De Leon.

We opened 20 new shelters A Bridge Home in 24 months, surpassing our goal of 15 in the midst of a pandemic, reaching 27 in Los Angeles.

In terms of jobs, he said that they have worked to make the Los Angeles International Airport a world-class one, with a massive investment of $15,000 million while $2,500 million were allocated for the port of Los Angeles.

“We have created jobs faster than the other four metropolitan regions in the country. We have boosted the income of African Americans and Latinos by 44 and 43% respectively, when the nation has seen them increase by only 26 and 34%.

The mayor invited Freddie Ríos to his government report as well as other members of the community.

Ríos moved to Los Angeles a year ago with his pregnant wife and their child, and because of their criminal record and low credit, they had to go to live in a shelter. But thanks to the homeless assistance program, he now has a union construction job at LAX.

“For the first time in his life, Freddie has a bank account and a credit card. He and his wife, his 7-year-old and 5-month-old children, now have stability,” said the mayor.

He pointed out that they have been able to provide nearly $1.1 billion in rent and utility assistance to tens of thousands of families, keeping them from ending up on the streets.

“We are investing nearly $40 million in the world’s largest guaranteed income program.”

Juan José Gutiérrez, director of the Full Rights for Immigrants Coalition, said that Garcetti was a mayor who talked a lot and did little on those things that matter to the average citizen, who pays taxes and who represents the vast majority of this incredible city. .

“On the security side, it left us very badly off with a lot of problems in low-income communities.”

He added that on the other hand, the streets were filled with thousands and thousands of homeless people.

“He leaves and leaves that problem bigger than it was when he took office in 2013. It has been due to initiatives by councilors like Kevin de León that the problem is being addressed.”

As for the immigrants, he commented that he talked a lot about how he was going to help them. “He did no more than Antonio Villarraigosa, who promised to give them an identification card, and did not comply. And Garcetti created an immigration office that never worked.”

The only ones who have prospered in these years of Garcetti have been the great construction tycoons who built great skyscrapers in the center of the City, in which working people cannot live.

In conclusion, he stated that Garcetti leaves a bad taste in the mouth.

“The city of 9 years ago that it received was not as bad as it is today. The streets were not infected with so much crime and people living on the sidewalks. He wasted a lot of time flirting with the idea of ​​being president of the United States and then being ambassador to India, instead of addressing security, homelessness and homelessness.”

Luis Alvarado, a political analyst, said that Garcetti dedicated many years of his life to serving as mayor. “He did a good job, considering how difficult it is to manage a city like Los Angeles that is so diversified and large.”

He added that he was able to contain the race riots, work with leaders from different communities and make Los Angeles a city where people still want to live, in addition to surviving a pandemic.

But he also acknowledged that he had his big flaws in collecting large amounts of money to combat homelessness, one billion dollars, and leaving no trace that his strategy had worked.

“The situation is worse. Not to mention the economy, and people suffer because there is nowhere to live and there is no plan to build affordable housing for the working class.”

Alvarado finished by saying that Garcetti will have to deal his entire political life with the accusations that accuse him of perjury by saying that he knew nothing of the alleged sexual harassment by one of his closest former advisers.