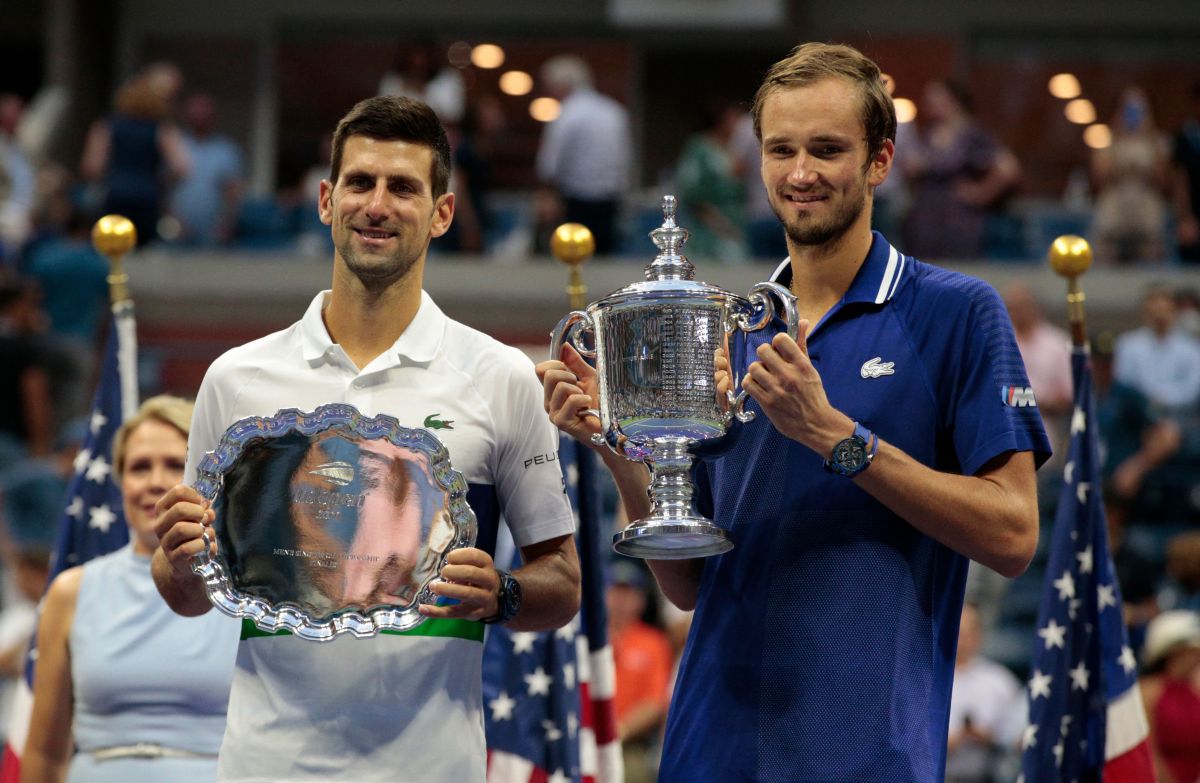 QUEENS, NY – The great history of tennis in 2021 was shattered in the last step. After winning 27 games and three Grand Slam titles, Novak Djokovic’s dream of becoming the first tennis player since Rod Laver in 1969 to complete all four “majors” in the same year ended at Arthur Ashe Stadium, in the final. of the US Open, because of a Daniil Medvedev who played the best game of his life.

The 25-year-old Russian destroyed the world’s No. 1 6-4, 6-4 and 6-4 and won his first Grand Slam title. He is the first player alongside Ivan Lendl in 1987 and Rafael Nadal in 2010 to win the US Open, having lost only one set in the entire tournament.

Medvedev dominated the game with his serve (16 aces and many more points earned from a great first serve) and his solid play from the back of the court with hardly any errors. Djokovic, a player who used to unhinge his rival, was this time the one who did not find the weapons to face the wall in front of him.

“Congratulations Daniil. An incredible game, an incredible tournament. If there is anyone who deserves a Grand Slam title now, it is you “, Djokovic congratulated the champion during the trophy ceremony.

“My legs weren’t there,” Djokovic, 34 years old and 1,176 games in his career, later explained at a press conference. “I was below my level. It was one of those days when things don’t work out ”.

Djokovic reached the final with many more kilometers on his legs after playing 24 sets 17 hours and 26 minutes, by Medvedev’s 19 sets in 11 hours and 51 minutes.

Despite the defeat, Djokovic thanked the public for their support, which was the majority during the final: “Tonight, even though I didn’t win, my heart is filled with joy at how you make me feel. I have never felt like this in New York today. I love you, thank you very much from the heart “.

Medvedev, for his part, apologized to the fans for “ruining the party.” And he praised Djokovic.

“I have never told anyone but I am going to say it today: For me you are the best tennis player in history,” the Russian told the Serbian.

Medvedev is now 4-5 against Djokovic. But playing against the world’s No. 1 Serbian, he has beaten him four times by two losses. He is the only tennis player of the 82 who have played against Djokovic as number 1 who has a positive record. But he had never beaten him until today in a 5-set match.

The game started badly for Djokovic, who lost his serve in the first game after a double fault and several long exchanges, very deep, which Medvedev endured until forcing the Serbian errors. He even came close to taking a second break in the third game, after another double fault from Djokovic.

Instead, Medvedev added his games to serve with ease early on. He hit eight aces in the first set alone.

The best Djokovic was seen at the beginning of the second set, more aggressive and dominating with his serve. He was about to break in the second game, when Medvedev gave up 0-40. But the Russian came out unscathed thanks to two more aces.

Again, after maintaining his serve, Djokovic looked to put one more gear, kissing the lines, making the Russian run for more break balls, but failed to achieve them.

At that moment the strangest moment of the final was lived. With a break ball for Djokovic and second serve, music began to play through the stadium speakers. The chair umpire saved the point, which was replayed with two serves for Medvedev, who ended up saving the game.

Angry, Djokovic smashed his racket on the ground.

Djokovic just smashed the racket, pissed off at missing two break balls. Then ask for forgiveness, or something similar. The public is turned over to him. #USOpen pic.twitter.com/2BZTlzD12g

Then, perhaps still distracted by the previous opportunity, Djokovic gave up his serve. It was the beginning of the end for the Serb. The break was enough for the Russian, who defended his serves to endorse another 6-4.

The third set was even less matched. Medvedev started by breaking Djokovic’s serve. Then the Russian left a loophole with his serve, with bad decisions, such as left too long, but Djokovic did not know how to take advantage of them and made several unforced errors.

Again, missing an opportunity seemed to hurt Djokovic, who then gave up his serve again. 3-0 and two “breaks” seemed like a mountain too high to overcome.

With 5-2 down, Djokovic changed his shirt to a white and blue one, after having played in full blue throughout the tournament. Perhaps he was looking for the turning point that he could not achieve on the track.

But help came from the public, who did not let Medvedev out in silence, who committed two double faults and one unforced error to lose his serve for the first time in the match.

Very bad the public not letting Medvedev take out in silence. It cost the Russian the first break. #USOpen pic.twitter.com/skJuVsstFT

At 5-4, Medvedev served again to close the game and again had to endure boos and whistles. But this time he managed to focus and grab the game, the set, the match and his first Grand Slam tournament.

“I would be just as happy having beaten anyone else. But for my future, for my confidence, knowing that I have beaten someone who was 27-0 in the Grand Slam this year is very important, “Medvedev assured at a press conference.

As soon as the game was over, Djokovic cried in his chair while he waited for the trophy to be awarded, amid the encouragement of his fans.

“At that moment I was relieved that this race [por el Grand Slam] I would have finished “, He later confessed the number 1 in the world and winner, for now, of 20 “greats” such as Roger Federer and Rafael Nadal.