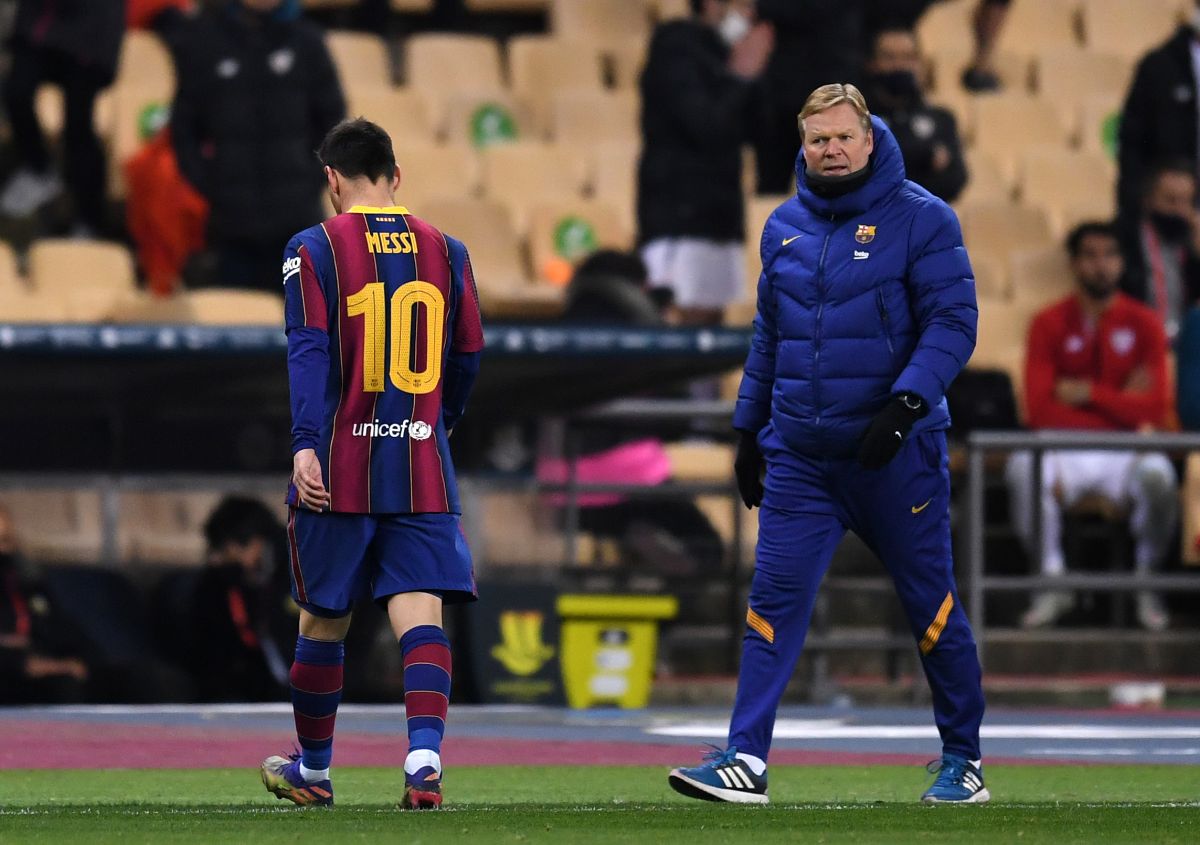 Messi’s history at FC Barcelona comes to an end.

After 21 years at the Catalan club, the Argentine striker will not renew his contract, despite the fact that both parties already had a preliminary agreement and only the last details were missing.

Something happened in the last hours.

FC Barcelona limited itself to informing that the renewal “cannot be formalized due to economic and structural obstacles“.

“Both parties deeply regret that the wishes of both the player and the club cannot finally be fulfilled,” he said.

“Barça would like to thank with all its heart the player’s contribution to the enhancement of the institution and wish him the best in his personal and professional life.”

Messi did not immediately offer a statement.

According to sources from the Catalan newspaper Mundo Deportivo, “the Argentine forward is in shock” and has no plans to offer any reaction.

But what was it that prevented the continuity of one of the most successful relationships in world football?

Messi won everything with Barça: 10 La Liga titles, 4 of the Champions League, 7 from the Copa del Rey, 3 from the European Super Cup and 3 from the Club World Cup.

On a personal level, he says goodbye as the club’s top scorer, with 672 so many, in addition to that in 6 times he won the Ballon d’Or.

It seemed that Messi’s career, now 34, had to end with the retirement of the Argentine with the “culé” shirt that he has defended since he was 13 years old.

However, Messi was no longer happy in the team.

“There has been no project for a long time and there is nothing, they are juggling and covering holes,” he reproached the board of directors last year, after communicating his intention to leave.

“President [Josep María Bartomeu] He always said that at the end of the season I could decide if I wanted to go or if I wanted to stay and in the end he did not end up keeping his word, “he said in an interview with the Goal site.

To avoid a legal dispute, the Argentine chose to remain unhappy and not fight against “the club of my life.”

The departure of Josep María Bartomeu and the arrival of Joan Laporta to the presidency of the Catalan club changed Messi’s perspectives.

The player was more satisfied with Laporta’s project and the promises of team improvement.

In this season, theteam failed to achieve all of its goals: he won the Copa del Rey, but was third in La Liga, lost the final of the Spanish Super Cup and was eliminated in the second round of the Champions League.

Despite this, Messi and Laporta assured that they had a preliminary agreement to sign the 11th contract renewal.

The club financial problems they complicated everything.

Like other teams, FC Barcelona is in financial difficulties derived from the drop in income due to the coronavirus pandemic.

Messi had agreed to reduce his salary to half of what he earned, about US $ 165 million according to sports press reports, and stay at FC Barcelona until 2026.

The Argentine returned to Barcelona after a few days of vacation and this Thursday he had to sign his new contract.

3. The salary cap made it impossible

Renewing Messi implied that Barça raised its budget for paying players and exceed the spending cap allowed by the Spanish League.

This is determined through the income generated, which was lower in the pandemic.

So the signing of Messi’s contract depended on player departures that would allow financing the salaries of the Argentine captain.

In this scenario, the club indicates in its statement this Thursday that there were “economic and structural obstacles”, alluding to the “Spanish La Liga regulations”, that is, the salary cap.

There was no immediate response from La Liga to that point.

4. The injection of capital that Barça rejects

In the middle of the negotiations, a agreement between La Liga and capital investment firm CVC Capital Partners.

The pact, which has yet to be ratified by the club assembly in the next few days, would inject about US $ 3,000 million to spanish football, of which 90% would be shared between the clubs.

Although only a fraction (15%) could be used to finance salaries, capital would allow the salary cap to be increased of the clubs.

Although the capital inflow did not completely relieve the club of its salary problems, analysts speculated that it was a way to unlock Messi’s hiring.

To FC Barcelona it was not an option, as he reported this Thursday -hours after the announcement about Messi- that opposes the pact.

“The club considers the signing of a half-century contract inappropriate given the uncertainties that always surround the world of football,” said Barça.

5. Messi asked for more than money

Despite the fact that Messi was satisfied financially to continue with FC Barcelona, ​​there were also other requests that the club could not give him.

The Spanish press assures that the Argentine requested the signing of his compatriot Cristian Romero, but the club has not been able to close the deal for the defender.

In recent weeks they signed Sergio Agüero and Memphis Depay, but Messi had argued that it was not enough to have a competitive team.

Laporta announced an appearance before the press for this Friday in which the president of the club will elaborate on the announcement that caused an earthquake in world football.

Where is it going?

Despite the announcements, analyst Andy West says it may not be the end of Messi’s relationship with FC Barcelona.

“In fact, more than a final and definitive statement, it is actually a very risky tactical move in the club’s power game with La Liga,” the Spanish soccer expert tells BBC Sport.

“Maybe we can see Lionel Messi again in the Barcelona shirt after all.”

Since last year, when he announced his intention to go to another club, both the Manchester City As the Paris Saint Germain were the two clubs most indicated as possible destination of the Argentine striker.

Although these possibilities are reopened after the announcement on Thursday, the English club has just introduced its new star forward, Jack Grealish, who will wear the 10 jersey next season.

Messi has also said that he has always had the “illusion” of living in the United States and playing in the MLS.

Whatever his future, at this moment Messi is a free player, as his contract expired on June 30.