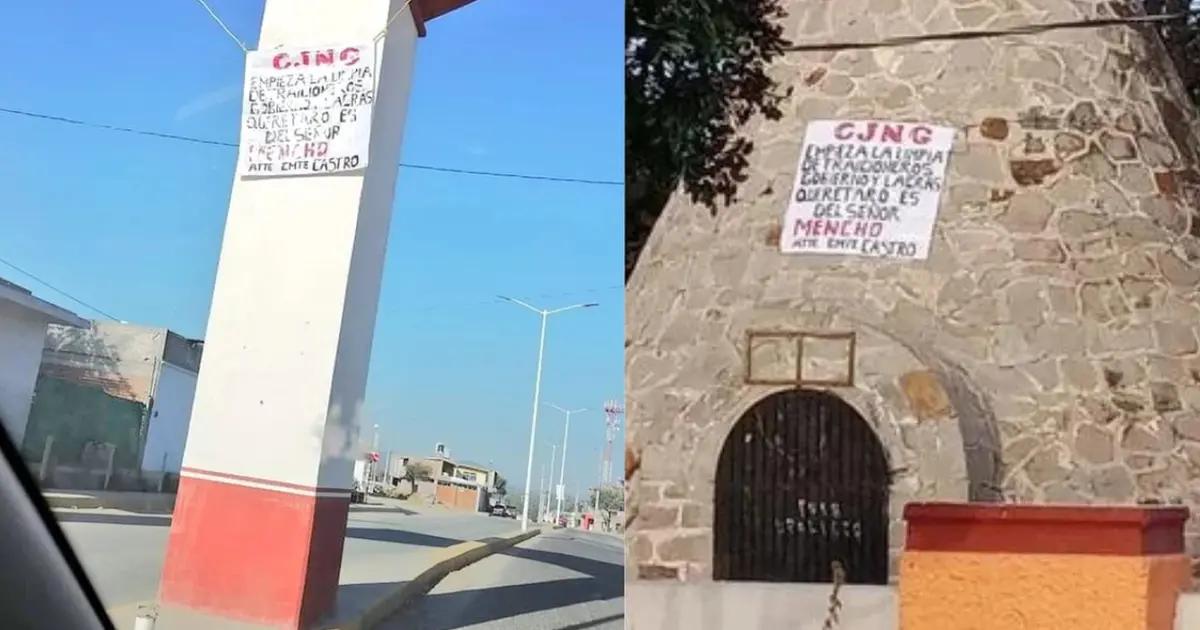 In the last week of November, multiple narco mantas alluding to the Jalisco Cartel – New Generation (CJNG) were displayed in several municipalities in Querétaro, which generated public concern. Authorities have now managed to identify and arrest the alleged perpetrators of the messages.

In total, there were four municipalities where the writings appeared: Pedro Escobedo, Querétaro, Corregidora, and San Juan del Río. Between Sunday, November 27, and Monday, November 28, these banners were placed, in which it was warned that the entity belonged to Nemesio Oseguera Cervantes, El Mencho, leader of the “cartel of the four letters.”

Given these facts, the corresponding investigations began, and the authorities arrested nine people, who were also seized with doses of marijuana and methamphetamine. This was after simultaneous operations in 19 homes in the Metropolitan Zone and San Juan del Río.

At first, it was announced that seven individuals were arrested, who were found with three bags of marijuana and 11 bags of methamphetamine (the exact amount was not disclosed), as well as 19 cell phones and a vehicle that was allegedly used to place the narco messages.

Subsequently, a couple of adults were arrested in San Juan del Río while trying to place a banner “with an identical legend to those of previous days,” detailed the Prosecutor’s Office of Querétaro. Elements of the state police and personnel from the XVII Military Zone participated in these actions.

In Pedro Escobedo, messages of this type were found in the communities of La Lira and La Venta, the municipal police announced on November 27. “The first investigation data have been collected through the video surveillance cameras,” it was reported.

The messages were signed by a subject identified as “Comandante Castro” of the CJNG. “The cleansing of government traitors and scumbags begins,” the writings on the public road warned.

The following day, messages appeared in the Casa Blanca neighborhood, somewhat similar to the previous ones, as they also referred to the CJNG and were signed by Castro. However, on this occasion, the messages were left next to a container containing animal remains (at first, it was thought they belonged to people).

The Mexican state Prosecutor’s Office clarified after initiating the corresponding investigation files, “Expert Services carried out the processing and analysis of the viscera left in styrofoam containers, and it has been determined that they are of animal origin, specifically from pigs.”

In one of the boxes that were found, the message was the following: “Querétaro, CJNG is here the mere v*rga (mv) ‘Castro is here'” (sic). According to local reports, three coolers were found on the bridge in the community of Montenegro in the Santa Rosa Jáuregui Delegation.

Also that same day, a vehicle was reportedly set on fire on Graciano Street, also located in the Casa Blanca neighborhood. However, the authorities did not specify if the incinerated vehicle was related to the narco-messages displayed in the municipalities of Querétaro.

In mid-November, the death of Emmanuel “N,” alias El Zermeño, one of the main leaders of the CJNG in Guanajuato, was announced. However, he was killed by agents of the Querétaro Prosecutor’s Office during an operation. Before joining the four-letter cartel, he belonged to the Santa Rosa de Lima Cartel (CSR), said the Undersecretary of Public Security, Ricardo Mejia Berdeja.