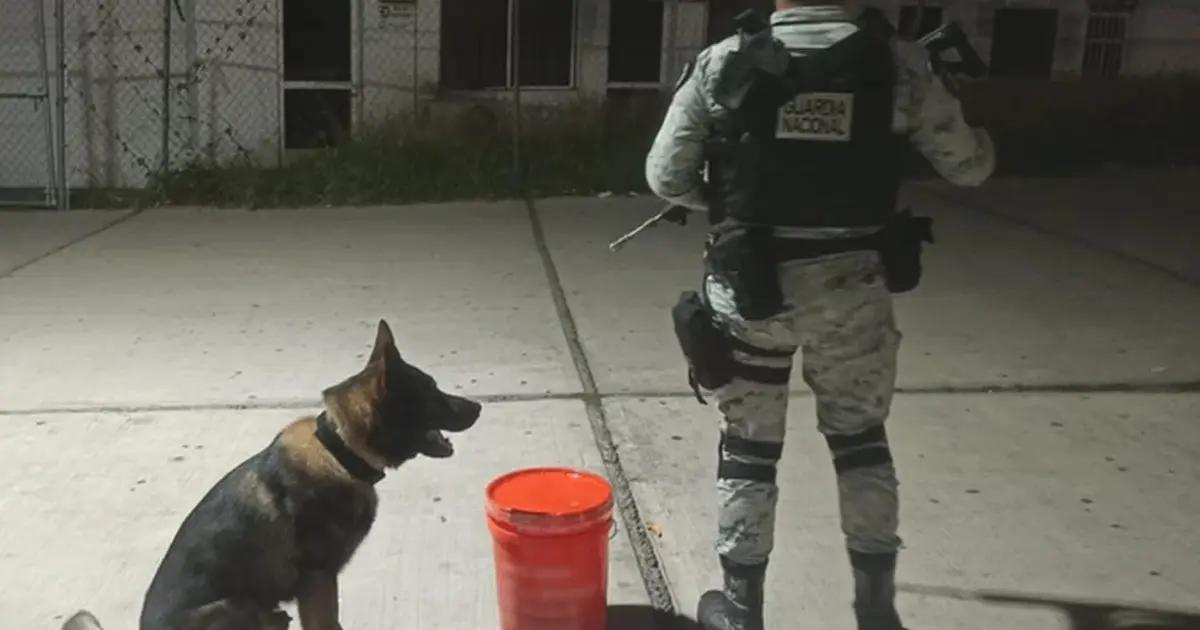 Canine binomials of the Mexican National Guard (GN) managed to intercept liquid methamphetamine in Querétaro that was to be sent to an address in the United States. According to an Insight Crime report, the US has become the “world capital” of drug consumption.

The actions took place at Querétaro International Airport on October 31, when members of the GN were carrying out inspections as part of the National Public Security Strategy.

The agents, accompanied by the canines, entered a courier and parcel company to check packages and prevent the transfer of narcotics and firearms. To do so, they randomly chose several shipments for the canines to search them.

Although no suspicious packages were first detected, the binomials changed their behavior after a short time. This attracted the attention of the national guards, who approached the dubious object. It was an orange plastic bucket, to which the canines of the corporation gave a positive signal that alerted them of possible narcotics.

The container was inspected, and it was discovered that it came from Querétaro and was destined for an address in Wisconsin, USA. When the container was opened, an “oily amber liquid” was found, which coincided with the characteristics of methamphetamine.

As a result, the GN elements secured the bucket, which was handed over to the Mexican Attorney General’s Office (FGR). However, the exact weight of the narcotic has not been disclosed so far.

For this reason, it is unknown how many possible doses the secured container would be equivalent to. According to reports from the Drug Enforcement Administration (DEA), liquid methamphetamine was one of the main drugs smuggled into the country because it could be dissolved in water or alcohol.

The U.S. National Institute on Drug Abuse has indicated that methamphetamine comes in various forms that can be smoked, snorted, injected, or ingested. The mode of use varies by geographic location.

In addition, the mode of consumption modifies the effects produced. When smoked or injected, the substance quickly reaches the bloodstream and the brain, “causing a surge of intense and immediate pleasure,” according to a research report entitled Methamphetamine Abuse and Addiction, prepared by the Institute.

In contrast, the drug produces euphoria when snorted or taken by mouth. According to DEA reports, most of the methamphetamine circulating in the US is manufactured in Mexico, mainly in clandestine laboratories.

This is reflected in the different seizures that the National Guard and the Secretariat of National Defense (Sedena) have carried out in different states of the Republic. One of the most recent shipments intercepted contained 20 spicy candies with methamphetamine.

The seizure was made in the municipality of Culiacán, Sinaloa, by the GN on October 31. According to the authorities, the “tamarindos” and the candies were in a cardboard box and were destined for Baja California.