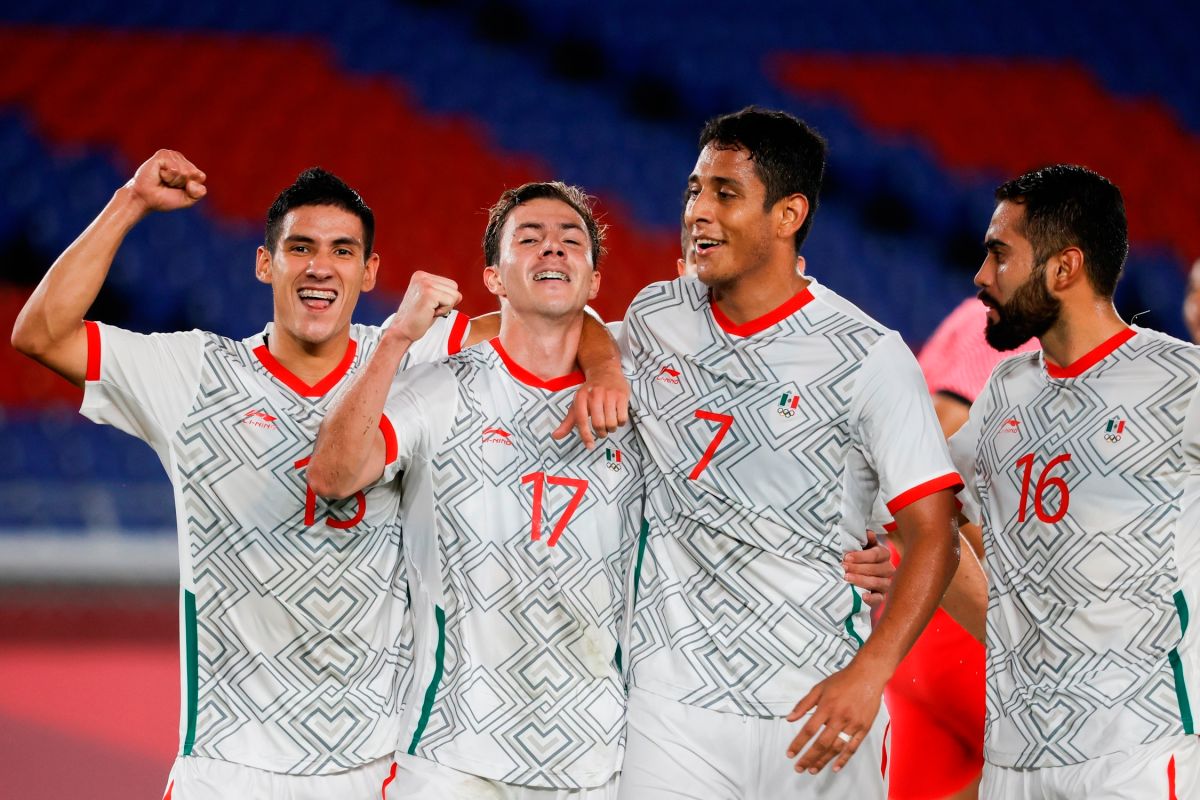 El Tri grabbed the brush and began to paint at the Yokohama International Stadium. Mexico beat South Korea 3-6 and will face the Brazilian team for the semifinals of the Tokyo 2020 Olympics. Luis Romo and Sebastián Córdova they scored some unmissable goals. Jaime Lozano’s team knew how to recover from the approaches of the Asians.

The first moments of the game were a lot of study and concentration. However, in the second arrival of the Aztec team at minute 12, Luis Romo showed all his generosity and granted a head assist in the area to Henry Martin. The forward of the Eagles of America did not waste his opportunity and scored the first goal of the match.

The curse is over 👻!@HenryMartinM does not believe in ghosts and scores the first goal of #MEX in view of #KOR in #OlimpicosTelemundo
⚽ Second goal of the forward in #Olympic Games of # Tokyo2020 #KOR 0-1 #MEX pic.twitter.com/g3ZOrUBKtN

However, at minute 18 he would come the equality of the whole of South Korea. A very good move from Dong- Kyeong read that he ordered to silence his rivals. Without a doubt, it was a real goal that cut El Tri’s mental clean-up.

⚽ Dong-Kyeong Lee did not hesitate and with a goal he tied the game
Follow him LIVE through our APP Telemundo Deportes ➡️ https://t.co/Rc9UchvVqW #OlimpicosTelemundo#KOR 1-1 #MEX pic.twitter.com/H1ubgHIhMc

Luis Romo, at 29 minutes, gave a real kind of talent. The player managed to control a difficult ball on the run in front of the South Korean goal. Romo kept the ball like a center forward. Control with right leg and left-handed spike. Magnificent definition of the player of “The Machine”. Without a doubt, the best goal of the Olympic Games, so far.

He lowered it like a crack and defined it masterfully 😎!

Before the first half was over, Mexico would increase its advantage on the scoreboard. Sebastián Córdova would maintain nerves of steel and managed to fool the goalkeeper in the definition. The South Korean goalkeeper lunged to his left and the ball went to the opposite corner.

There are not two without three 😎!

Mexico knew how to suffer, but overcame adversity

After a magnificent first half, the South Korean team got dangerously close on the scoreboard. Just 6 minutes into the second half, Dong-Kyeong Lee scored the second goal for the Asians and put the difference in a bit. But nevertheless, three minutes later, Henry Martín scored his second goal of the game and peace of mind for Mexico.

Henry is already hooked 😎!@HenryMartinM scores his double and has three goals in the last two games of # Tokyo2020 #OlimpicosTelemundo
Follow him LIVE through our APP Telemundo Deportes ➡️ https://t.co/Rc9UchvVqW #KOR 2-4 #MEX pic.twitter.com/UZKE24kBVA

Jaime Lozano’s team exhibited all their quality in this match. At minute 63, Sebastián Córdova joined the show in the match. After the work of art by Luis Romo, the player of the Eagles of America He was not far behind and scored a left leg bomb that gave El Tri peace of mind.

He hit the ball with a grudge 🔥!

⚽ @ Cordovar97 marks his double with a shoe unreachable for the goalkeeper#OlimpicosTelemundo
Follow him LIVE through our APP Telemundo Deportes ➡️ https://t.co/Rc9UchvVqW #KOR 2-5 #MEX pic.twitter.com/geBCXgjYVz

Diego Lainez has been a substitute in the last two matches of El Tri. However, the Real Betis player entered the duel plugged in. The talented player He served an authorization from the right side for Eduardo Aguirre to continue with the party.

I had six minutes on the field 😱!

⚽ Eduardo Aguirre from half a turn scores his second goal in the #Olympic Games of # Tokyo2020#OlimpicosTelemundo
Follow him LIVE through our APP Telemundo Deportes ➡️ https://t.co/Rc9UchvVqW #KOR 2-6 #MEX pic.twitter.com/INQYSL4uQf

“Memo” Ochoa, a leader on and off the pitch

The experienced goalkeeper reinforced this Mexican team. In the previous game, Ochoa showed all his leadership with a motivational speech to his teammates. In the duel against South Korea, he was one of the protagonists to maintain the advantage with multiple saves that kept the rivals at bay.

“We are one game away from smelling the medals, bastards”: Memo Ochoa’s harangue after Mexico’s triumph

Mexico and its special goals: El Tri honored Zizinho in the semifinals of the Gold Cup [Videos]

Mexico vs United States: date and time of the duel for the 2021 Gold Cup grand final