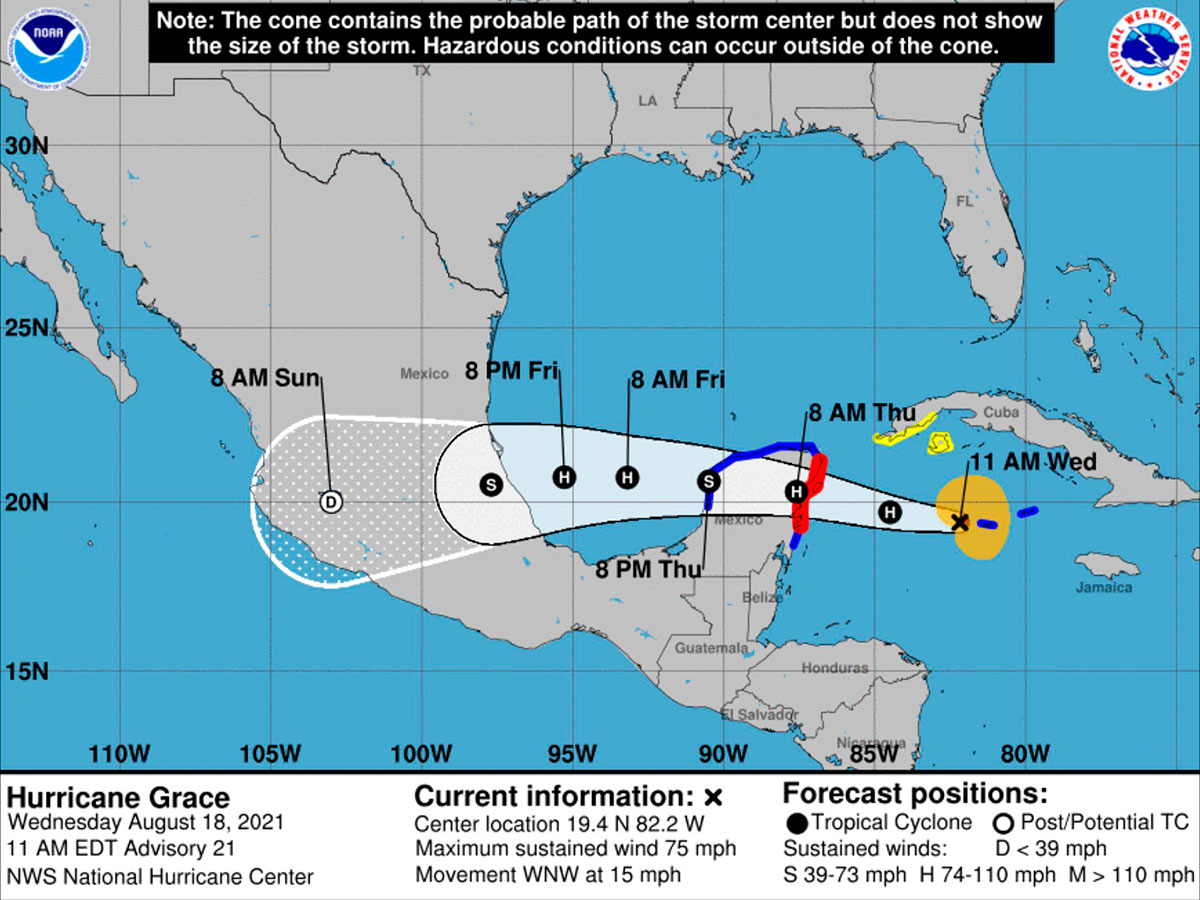 Authorities of the States of Yucatan and Quintana Roo, in Mexico, are on alert for the presence of Hurricane Grace, category 1, which is already near the Mexican coasts of the Yucatan peninsula.

The National Hurricane Center (NHC) of the United States indicated that at 11:00 hours (15:00 GMT) on Wednesday, the maximum sustained winds of Grace, which was located west of Grand Cayman, had reached 75 miles per hour (120 km / h), going from a tropical storm to a Category 1 hurricane.

Grace has become a hurricane over the northwestern Caribbean Sea and is headed toward the Yucatan Peninsula. Here are the 11 am AST Key Messages. For details on Hurricane #Grace, visit https://t.co/tW4KeFW0gB pic.twitter.com/VrGuOEl0ki

#Grace It is already a category ONE hurricane, it is located in the Caribbean Sea. Forecasts indicate that during the early hours of August 19, between 1 and 4 am it will impact the coasts of the State in the municipality of #Tulum, now located north of the city of Tulum. We will continue to inform. pic.twitter.com/sjfIjyBvdM

According to the trajectory that Grace’s center follows, it indicates that this phenomenon will move away from Grand Cayman and is expected to make landfall in Tulum, in Quintana Roo, During the early hours of this Thursday, on Friday, advance through the southwest of the Gulf of Mexico.

Before the approach of the hurricane #Grace, the following notice of restriction of access to the coastal zone of #Tulum. Keep an eye on the warnings and take precautions. #Do ItByTulum pic.twitter.com/j0HBPbXpfT

NHC meteorologists expect a strengthening of Grace’s winds before its center reaches the shores of the Yucatan Peninsula and that later it weakens, to later regain strength when it is over the waters of the Gulf of Mexico.

The swell generated by Grace will extend westward from Jamaica to the Cayman Islands, the southern coast of Cuba, while in the Mexican part of the Yucatan peninsula, from Cancun to Punta Herrero, including Cozumel, is under hurricane warning.

Continue Reading: The United States declared for the first time the alert for lack of water in the Colorado River