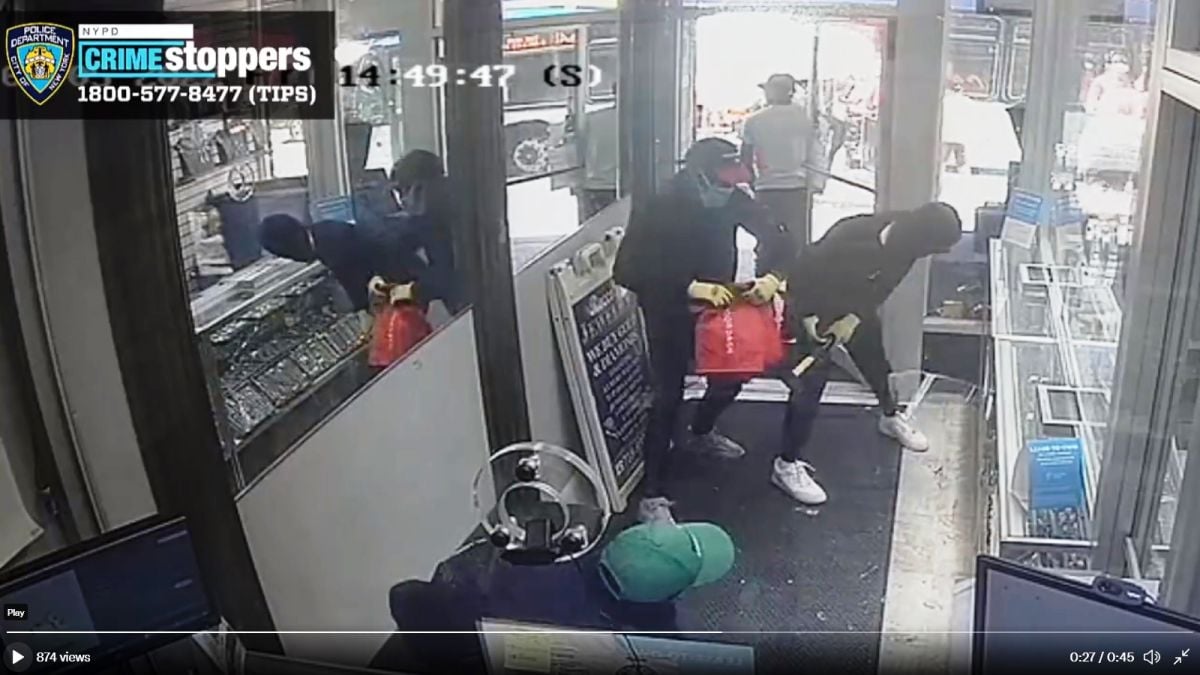 Four thieves stole jewelry worth around $2.15 million dollars from a store in the Bronx (NYC) yesterday in broad daylight, in a violent action that lasted less than a minute.

NYPD released a dramatic security video who caught the thieves red-handed. In the heart-pounding sequence, one of the suspects entered the jewelry store on Webster Avenue near East Fordham Road around 2:30 pm Friday. After being admitted by an employee who activated the security bell, held the door open for the other three suspects and he stayed “taking care” so that no one else entered.

Once inside the store, one of the newcomers used a hammer to break the windows while the other two took pieces of jewelry and placed them inside bags. the four suspects they fled the scene on foot as fast as they arrived.

Authorities said no one was injured during the violent robbery. Pix11. Police asked for help finding the suspects. Anyone with information should call. at 1-800-577-TIPS (8477) and in Spanish 1-888-57-PISTA (74782). Also through crimestoppers.nypdonline.org or by text message to 274637 (CRIMES), followed by TIP577. All communications are strictly confidential.

In a similar robbery, in April two thieves were caught breaking the window of a jewelry store in broad daylight in the Bronx, where in a few seconds they took merchandise valued at $131,000 dollars.

Complaints of pickpocketing or theft of products in NYC stores have risen 81% this year compared to the previous one, aggravating a trend that had increased due to penal reform and the pandemic. Cases have also skyrocketed in the rest of the state and other parts of the country.

The situation has generated unemployment by store closings, product shortages, more merchandise placed under lock and key and even episodes of violence with injured employees confronting thieves, many of them repeat offenders.

state laws made shoplifting a promising option for some criminals, amid an apparent impunity. According to him Mayor Eric Adamscurrently in NYC criminals walk free who have been arrested up to 100 times in two years for the same crime.