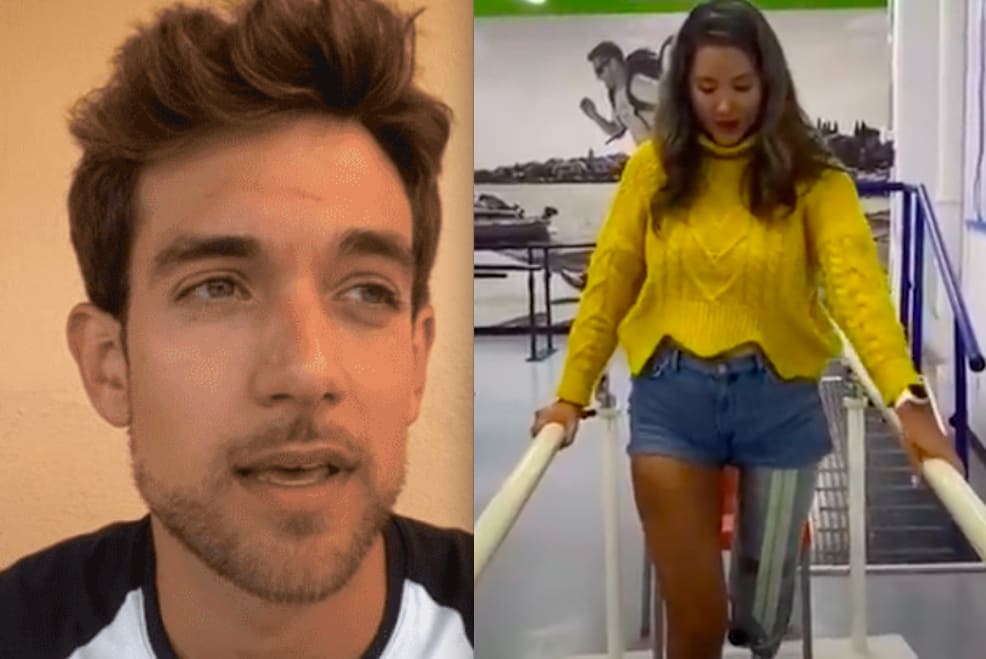 “She is an earthly angel and the woman of my dreams”; It is revealed that the former beauty queen and Miss Colombia, Daniella Álvarez, who had her leg amputated, is having a new boyfriend and is nothing more and nothing less than a famous Colombian actor, who was in charge of announcing this great news. It is about the soap opera actor, Daniel Arenas, who confessed that he is very happy and grateful to have found a person like her.

It was in June 2020 when it was announced that the former beauty queen, Daniella Álvarez, former Miss Colombia 2011 – 2012, confirmed that her left foot would be amputated due to, all this after having undergone three emergency surgeries due to a abnormal mass in your abdomen.

After this, and after announcing that her left foot would be amputated, the beauty queen, Daniella Álvarez months later, would announce that her relationship with the Spanish actor Lenard Vanderaa, the young man who accompanied her in all these difficult moments, was coming to an end, and through his social networks, he would confirm this break:

“The one who showed me the meaning of unconditional love every day, Lenard Vanderaa. Today we are not together, but the meaning it has in this process I cannot explain in words. Infinite thanks ”, expressed the Colombian model in a photograph of both embraced. After this, the young man began to receive endless criticism, since they pointed out that Daniella did not deserve it, comparing it with the case that existed between Adamari López and Luis Fonsi, who left her after being diagnosed with cancer.

Fortunately for the former Miss Colombia, Daniella Álvarez, things in the field of love are smiling again, and months after having finished with her ex-partner, the beautiful model is already debuting a new boyfriend. It is about the Colombian soap opera heartthrob, Daniel Arenas, who was himself in charge of announcing this great news, confessing that for him Daniella is his ideal girl.

According to information released by the portal of The universal, Since a few weeks ago, they began to talk about a possible relationship between the actor and the model, all this after several photographs began to circulate in which they appeared together, however it was not until the protagonist himself admitted this new romance .

During his interview with the program Spectacular Formula from Formula Group, Daniel Arenas confessed that despite the fact that he never aired his private life, he felt free to talk about it, confessing how happy he was: “Since I arrived in Mexico 11 years ago I never talk about my private life, sentimental or love. ”.

After this, the actor confessed that he was the new boyfriend of the former Miss Colombia, Daniella Álvarez, showing himself happy to be the person who accompanies her at all times: “I am going to tell you because I have no problem and I am too happy: yes, we are a couple, we have been dating for a few months and we are very happy ”.

“He is an earthly angel”; Daniella Álvarez, former beauty queen, has a new boyfriend

After revealing that he was the new boyfriend of the former Colombian miss, actor Daniel Arenas was excited about this new relationship, confessing that Daniella Álvarez was his ideal girl and that he was very proud to be someone so important to her: “La The truth is, Daniella is an earthly angel and my God put her in my path ”.

“We are in that process of being happy and grateful for what we are experiencing. We feel that it really is like a miracle of God and we are there building and valuing every day ”, added the actor. On the other hand, and through his social networks, Daniel Arenas made it clear that Daniella Álvarez is the woman of his dreams.

“He is quite a gentleman”; Daniella Álvarez, former beauty queen, has a new boyfriend

Faced with this great news, various followers of the Despierta América Instagram account, who also made this news known, began to react, congratulating the new couple: both, and that they are very happy “,” God takes away, and when he gives multiplies “.

“He is a gentleman and she deserves someone like that”, “How cute, they deserve all the happiness in the world”, “She is a warrior and a lady, and he is a gentleman”, “They make a very beautiful couple” , “I like how they look, besides that they are called the same hahaha”, “Congratulations, God bless that relationship, they make a very nice couple.” YOU CAN SEE THE PUBLICATION HERE

They remind you of your ex

On the other hand, a follower highlighted the following: “Good, I hope they are very happy and a long-lasting relationship because the day you leave her surely her followers will kill you, just as they did with the ex-boyfriend.” It should be noted that it was not long ago when Daniella Álvarez’s ex-partner, Lenard Vanderaa, received endless criticism after it was announced that both had finished.

And it is that after being informed that they had already finished, the attacks against the Spanish actor were so many that he had to go out to defend himself on his social networks, even assured that he received threats after his separation was made public on May 15, the day that she recalled that just a year after her ischemia, People magazine reported in Spanish. Filed Under: Daniella Álvarez, former beauty queen whose leg was amputated, has a new boyfriend and is a famous actor

In the video that Lenard Vanderaa uploaded to his official Instagram account, he denied having left Daniella Álvarez when he lost his leg and with great annoyance he denounced that he and his family had received threats on the networks after the publication of the Colombian model:

“Yes it is true that during the whole process of last year, I received many beautiful messages, of support, of affection, for everything that happened and what you already know… But then there are many messages that I have been receiving for months, day after day, of many insults, disrespect, even threats against me ”. Filed Under: Daniella Álvarez, former beauty queen whose leg was amputated, has a new boyfriend and is a famous actor

“There are always two versions of a story”

With a serious demeanor, the Spanish actor narrated that these messages had crossed the line, since in many of them they already messed with his family and threatened him with death: mother, with my sister, who have nothing to do with my life … Or with my life with another relationship with another person ”.

The actor continued explaining why he was in Spain and clarified that he did not abandon Daniella Álvarez: “There are always two versions in a story, and I am not here in Spain because I fled or because I abandoned it, if I am in Spain it is because I had to leave due to circumstances, and my visa has nothing to do with it … “, he said. Filed Under: Daniella Álvarez, former beauty queen whose leg was amputated, has a new boyfriend and is a famous actor

“It is very strong to hear that I abandoned her”

Regarding the rumors that arose after his break with the Colombian model, in which they said that he was the culprit, the Spaniard said: “So it is very strong to hear that I abandoned her for another, because she is missing a leg, because she wanted followers” , he expressed indignantly. Filed Under: Daniella Álvarez, former beauty queen whose leg was amputated, has a new boyfriend and is a famous actor

“I think that just what I did as a normal person is to be supporting his partner in the most difficult moments of his life because he needed me, and I did it and I was there for four hours a day, for months, because it was the woman that I wanted, and I did it and I would do it again if we go back, ”said the Spaniard.

“People do not know what happens”

And he continued: “… but people do not know what happens and like another normal couple, it is over and each one has taken their own path, and I simply wish Daniella the best, in her life always, from the heart, that be happy and that’s it, it’s just that ”, concluded the Spanish actor. Filed Under: Daniella Álvarez, former beauty queen whose leg was amputated, has a new boyfriend and is a famous actor

In social networks, users immediately expressed their opinion: “Well, it is your right if you do not want to continue with it. You do not have to feel sorry for her or stay with her for that, we must learn to respect, no one is obliged to stay with someone just to avoid looking bad !!! ”. Some images of this note come from the following video