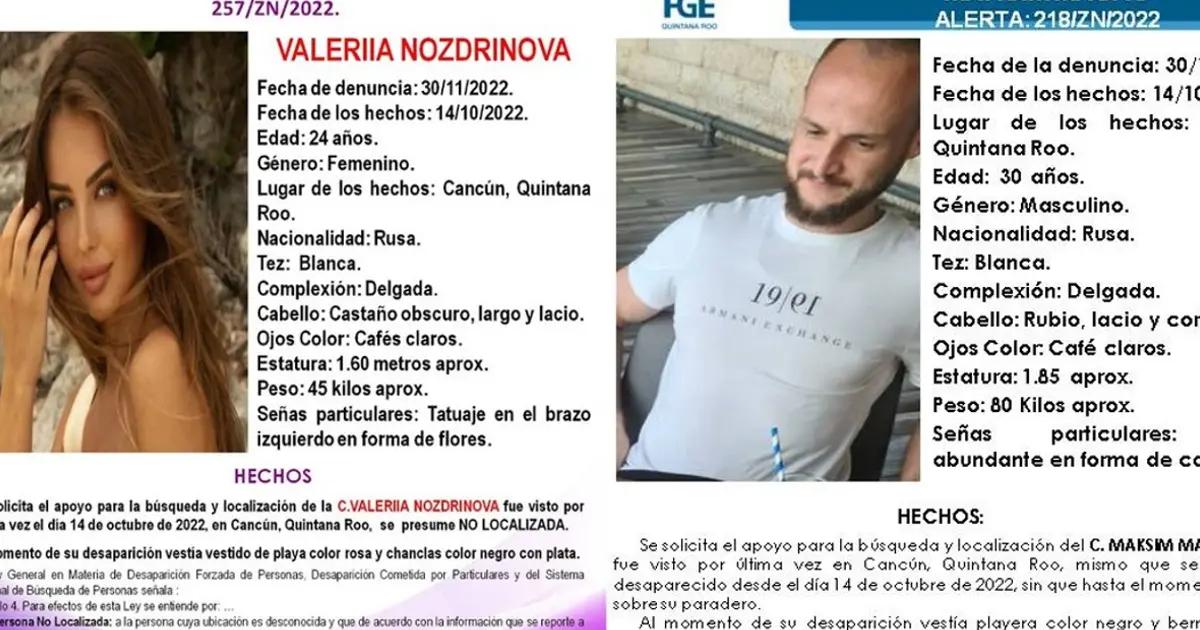 Authorities in Cancun, Quintana Roo, announced the disappearance of a man and a woman of Russian nationality in that tourist destination, for which the corresponding search files were shared.

The State Prosecutor’s Office reported that the woman, Valeria Nozdrinova, 24, was last seen on October 14. On her disappearance, she wore a pink beach dress and black and silver flip-flops.

As a particular sign, the young woman has fair skin and a thin complexion. She also has long, straight, brown hair. The card also notes a flower tattoo on her left arm.

The other missing person in Quintana Roo is Maskim Masko, 30. He is approximately 1.85 meters tall and fair-skinned, with short, straight, blonde hair and a thick beard.

The last time he was seen was also on October 14, wearing a black T-shirt and shorts, according to the Prosecutor’s Office.

Although both Russian citizens apparently disappeared on the same day, it is unknown if there is a relationship between them, that is, family, friendship, or sentimental.

These cases are added to that of Oksana Gracheva Olegovna, another Russian citizen being sought by the state of Nuevo León since she disappeared on November 24 in the municipality of Guadalupe.

According to the file released by the Mexican authorities, the 28-year-old girl has blonde, straight hair, and her complexion is white; in addition to having blue eyes, she is thin and measures 1.68 meters.

As a particular sign, it was detailed that he has some scars on his arms from cuts and wears a black sweatshirt with drawings of bones simulating a skeleton, a black and purple shirt, green pants, and black boots.