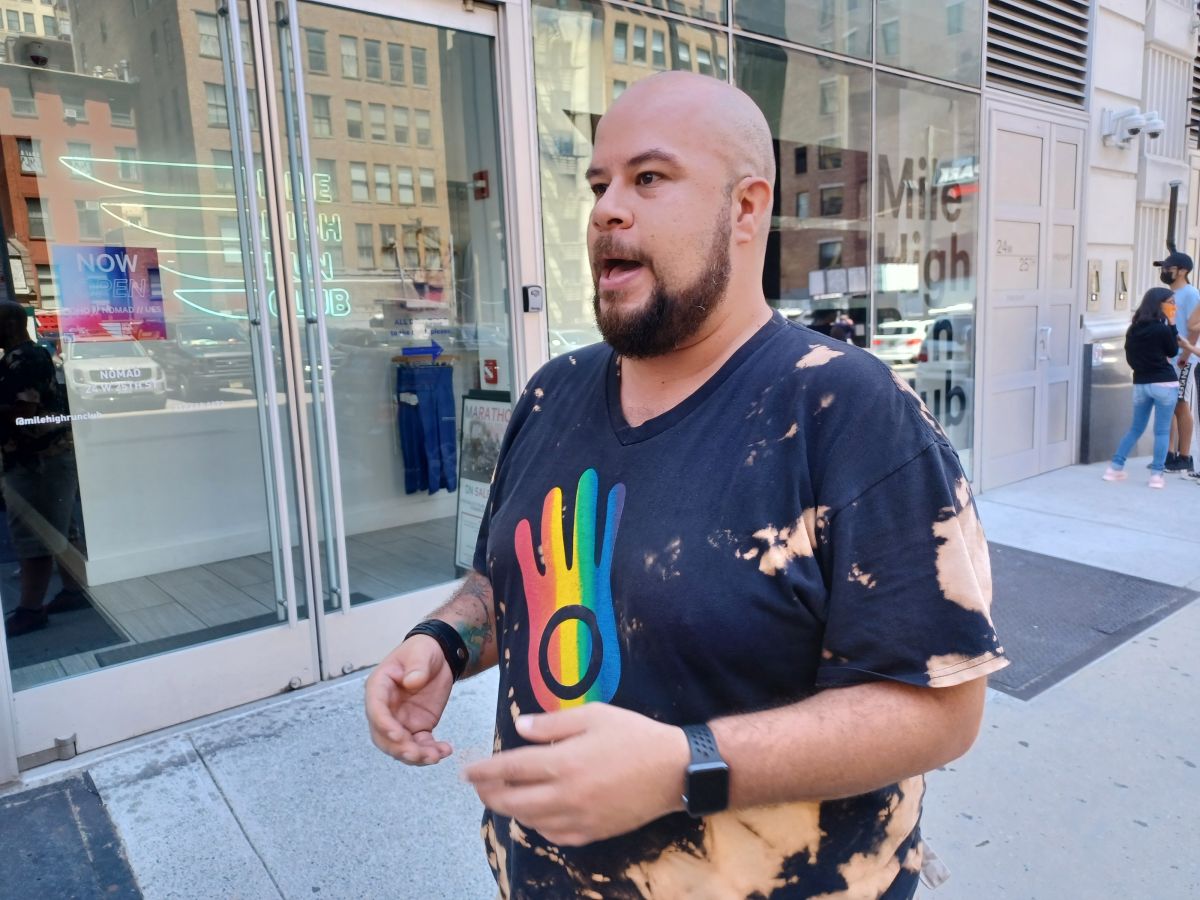 “The only thing I know is that it is some sores on the body, that are coming out to gays”.

The previous expression issued by the Mexican construction worker José Zabala, 35 years oldcould be describing in a few words, the only “clear fact” and otherwise erroneous, that many New Yorkers have about the outbreak of monkey pox that appeared in the Big Apple last May.

For this reason, the New York City Department of Health (DOHMH) has put in bold and highlighted in its official communications that: “Anyone can get and spread monkeypox.”

Although in parallel, it is also highlighted that the confirmed cases have spread, at least until now, mostly in one group: homosexuals, bisexuals and other men who have sex with men (MSM).

Additionally, the City’s official recommendation is that “if you are a man who has had intimate relationships with men and has had multiple sexual or anonymous partners, your chance of exposure is high.”

To date this is the only group that applies to receive the available vaccines.

Let’s clarify! The virus does not discriminate

In conclusion, until this week through the testing and tracing actions, it is specified that the virus has not stopped multiplying. The large proportion of confirmed cases in laboratories have been clearly identified as MSM, but the “popular and confused” versions of who and how the infections occur have also taken their ascending pace.

In this sense, Carlos Cubas, Director of Dissemination and Training of the Sexually Transmitted Infections Program (STI) of the DOHMH, was blunt in clarifying that nor is it a sexually transmitted disease and much less is it an infection related exclusively to the ‘gay’.

“No specific group has been stigmatized. We know from experience that when an infection is given these kinds of labels, many groups turn away from the possibility of receiving medical attention, precisely for fear of that stigma”reinforced the public health expert.

According to official DOHMH data, as of July 28, nearly 1,300 people in the city have obtained a positive test for orthopoxvirus (monkeypox) in all five boroughs.

These confirmed cases are on the rise. And there are likely to be far more undiagnosed infections.

And even child and several women have tested positive in the despitationsbut even so, the official statistical reports put on the scale, with great force, that the spread has mainly affected men who have sex with men.

“There is a statistical factor of weight. That is very clear. But, we reiterate that this does not mean that there are many more people from other groups infected. Nor does it mean that is a disease unique to a group with a specific gender identity or expression. We want to highlight that”, underlined Cubas.

Continuous physical contact with an infected person is the main alert point handled by the scientific community. Obviously, the sexual act is included in the ways in which people can become infected. But it is not the only one.

“Now that it’s summer and people tend to wear less clothes, there could be a higher level of exposure in places of high concentration where people touch. The important thing is that if people feel ill, with some symptoms isolate immediately and consult your medical provider”said the City spokesman.

It’s too late: “A stigma was created”

At this time, beyond the concerns that could be being at the forefront of a new public health emergency, the activists of the LGBTQ+ communities have raised several manifestos against the approach they have had the first communications from health authorities about this infection.

In this direction, pointed the spokesman for the Oasis Wellness Center in Manhattan, a community organization that offers health support for Latinos from the LGBTQ+ community.

“I think the conversation we should have today is to diversify the message so that all New Yorkers assume they are also at risk. So far, what we have heard is a vocabulary very similar to that of the 80s with HIV-AIDSwhere only a specific population is associated with a disease”, Morales highlights.

For the activist, this message is the breeding ground for a wave of discrimination and attacks on groups who have already been stigmatized and rejected for years.

In addition, in his opinion, it is a message that will not help defeat the possibility that the virus will continue to spread and declared an endemic disease.

“When you emphasize that the source of contagion appeared in a group, and that it is also associated with very specific sexual practices, an obvious misinformation is generated. From the messages we have heard, it appears that monkeypox is a sexually transmitted disease (STD). And scientifically It has already been clarified that it is not.asserts the activist.

In Morales’ opinion, it is already too late, since there is already a strong stigma around monkeypox. So much so, that vaccines are generally only available to men who have had multiple sexual partners with other men.

“That, in itself, has a great stigmatizing power, which spreads the false idea that we are in front of an evil, that it only affects a group by the way they practice their sexuality”finished.

They are the ones who report it the most

There are other opinions, about the way in New York and in almost the whole world, the simian virus narrative has been discussed. Robert González, a Venezuelan activist who has fought for the LGBTQIA rights of Hispanic communities in New York for 25 years, ponders that the number of cases could “only look much higher” in members of this population segment, simply because “They are the ones who most dare to report it and seek more information.”

“There is a key element in this. When the majority of the population feels exempt from being infected, because they assume that the only route of risk is having sexual relations with people of the same sex, it is an element that helps to trigger propagation”, Gonzalez concludes.

In this sense, the Dr Ali Khana former official of the Centers for Disease Control and Prevention (CDC) who worked on previous outbreaks of this type of smallpox in Congo, detailed to national media that around the 95% of infections are transmitted through sexual contact.

“The fact that the outbreak is more concentrated among men who have sex with men provides a good opportunity for prevention actions within this group, which has been proactive in obtaining information and stand in line for vaccines,” he said.

However, the public health expert spoke of the need to remember out loud that people who do not belong to this group are at risk, and should be worried, not panicked.

In New York, due to the limited supply of JYNNEOS™ vaccine, eligibility during this phase has been restricted to gay, bisexual, or other men who have sex with men and transgender, gender nonconforming, or nonbinary individuals age 18 and older who have had multiple sexual or anonymous partners in the past 14 days.

Until this week, the DOHMH had administered 17,000 vaccines to eligible groups.

“Soon we will be expanding the vaccination days. The most important message at this time is for those who feel sick or suspect they have been infected: Seek help through all available City means and isolate yourselves“.

In numbers: X-ray of infections

How is it transmitted?

How can I prevent it?

To reduce the chance of getting and spreading monkeypox, based on DOHMH guidelines:

Who is now eligible for the vaccine?

DOHMH clarifies that eligibility for vaccination against this infection may change as the outbreak progresses and depending on the supply of vaccines. Until this week, only people over 18 can request appointments: