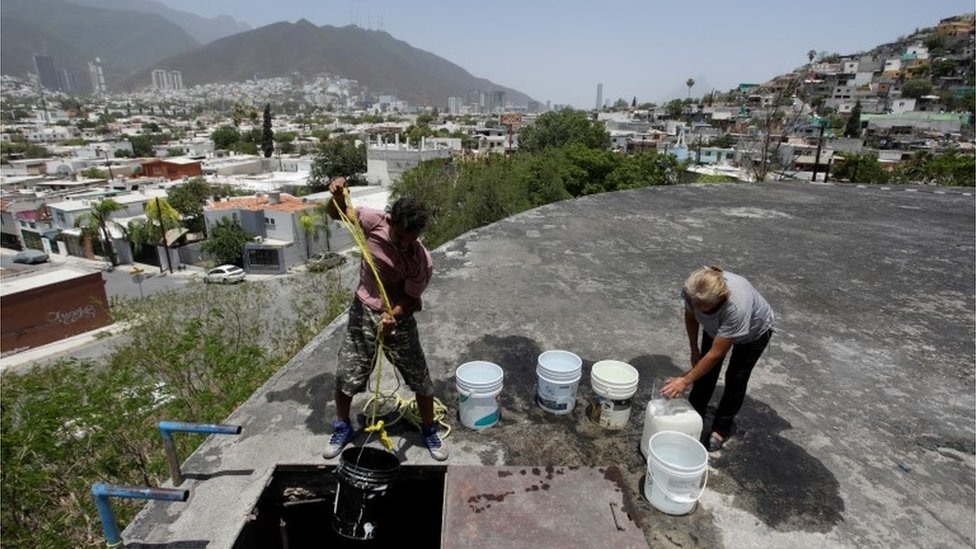 Monterrey is experiencing a drought such as has not been seen in recent decades.

The second largest city in Mexicoin which more than 5.3 million people live, has been suffering from a drought since the beginning of the year that is now classified as “extreme” and that has reached its peak this month.

With temperatures exceeding 40°C, its inhabitants have to manage to subsist on only six hours a day of pumping drinking watera restriction never seen before and implemented by the authorities to ration what is left in their dams.

Reservations are practically drysuch as the Cerro Prieto dam (2%) or La Boca (9%).

As if that were not enough, in stores there are days when it is not available bottled water to drinkeven in the richest neighborhoods of an industrial city that has always prided itself on having a higher level of development than the rest of Mexico.

“We are already in an extreme climate crisis,” says Governor Samuel García, resigned, who has even ordered the bombardment of clouds with silver iodide to generate rain.

For the researcher José Antonio Ordoñez Díaz, “Monterrey reached its day zero”, that point that had been envisioned for years in which the population would experience water scarcity due to the overexploitation of resources and the lack of management of the liquid.

In conversation with BBC Mundo, the academic from the Technological Institute of Higher Studies of Monterrey and the Faculty of Sciences of the National Autonomous University of Mexico explains how this point was reached and what possibilities the capital of Nuevo León has to overcome the crisis.

Why He says that Monterrey reached its “day zero”?

People in Monterrey currently do not have water to wash clothes, to use in the bathroom. Most of the homes are receiving only batches of water. It is what they have left in the dams.

Before they never had to think if they would have water to wash, or if they had to take a bath of maximum 5 minutes. And now yes.

Day zero arrived in Monterrey, it is the moment you realize that you no longer have water to do things.

This year something extraordinary is happening in Monterrey, a city that has never run out of water. Right now it has a water deficit of more than 31 million cubic meters.

They depend only on the rain.

Day zero is also the moment in which you must change the paradigms of the way in which the water is being used, that you know that you must treat it to recycle and filter it. But it is something that is not being done.

Is it a problem generated by the consumption of a population that has grown exponentially, or by the type of industrial city that it is Monterey?

Nuevo León is among the hottest points, with increases up to 48°C or almost 50°C. For reasons of winds and other things.

But we are also exploiting our country, altering our territory, giving concessions to industries in the north. And in particular, the industrial corridors of Monterrey consume a lot, a lot of water and do not treat it.

A soft drink consumes in one year what people consume in 10 years. And one more brewery.

Having agricultural, livestock or industrial activities in an area with water stress requires good management so that what we see now in Monterrey does not happen.

And there, if the industries consume 100 liters, those 100 liters go down the drain. They don’t treat them.

The current government of Nuevo León says that it is an inherited problem, that things have been stopped to avoid it in the last 30 years, is that the explanation?

The government of Nuevo León is a government of selfies, of taking photos here and there, they do not understand a situation of water crisis.

They say that they cannot take away the water concessions or the companies that are producing in their territory, because they pay taxes and create jobs. But they are running out of water.

So they choose to close the tap on people, but not on companies. There is a very serious conflict of interest and that is where day zero comes for them.

It is as if a person who manages the resources of your house tells you I am not going to give you the water, I better use it to wash the car. A government should not blame that it is a legacy of the past, but provide solutions.

Reviewing historical satellite images, there are times when dams look emptier than they are today, why hadn’t a similar crisis occurred?

The dams are the cisterns that allow you to store water for the dry season. But a dam often takes between one and ten years to fill up because it receives all the water that you are taking from nature to save energy.

But here, [Nuevo León], the total volume of water is compromised for less than a year. You can’t do that, but they are doing it.

Satellite images show a time when there was no population and no number of industries like there are today. By increasing this, you increase consumption.

But the problem is that there are no water treatment plants either.

It is very clear that the abuse of a few interests completely affects the development of the nation.

And they had never taken deforestation into account. At this time there are no longer viable areas for recharging water and with that much more is being lost.

How do you explain the drought in the north of the country like the current one?

We have very dry natural regions. There are regions of Mexico with less than 100 millimeters, that is, the maximum amount of water that will fall in a year is 100 liters per square meter. There’s no more.

In 70% of the country, the amount of water is less than 500 millimeters. Seasonally, the country is dry, where water is not abundant.

So 70% of all this territory is not suitable for the establishment of large cities or commercial plantations.

That is, it has a very fine balance between the water that rains and the groundwater. And if you overexploit any type of aquifer, you break the balance.

And at this moment the underground aquifers are being exploited in an inconceivable way and filled with fertilizers, which changes the natural conditions of the water. We are practically shooting ourselves, not in one foot, but in both legs.

And the orography of the country creates a perfectly well-passed natural barrier and there is no way for the clouds to pass and feed these regions with water.

And there is the population factor, how it has grown and how the water is distributed.

In my research I show that Brazil in 1962 had 73 million cubic meters for each inhabitant and by 2014 only about 73,000 cubic meters. This means that the available drinking water decreased by 70% on average.

And the drinking water that is divided among the inhabitants of the planet does not consider the flora and fauna, or any other species. So you assume that all the water is for humans and natural ecosystems are not taken into account.

Another component is deforestation.

In the period from 1985 to 2002, approximately 1.5 million hectares per year of different ecosystems were deforested in Mexico. If we superimpose a deforestation map on top of the maximum temperature and the climate and precipitation maps, the explanation comes out.

There it is shown why these regions have this water deficit and why it was accentuated.

Is there a short-term solution for extreme drought crises like the one in Monterrey?

Monterrey could be a prosperous city, the most beautiful, with the forests and the waterfalls of its mountains, but poor planning, the abuse of human growth and what is being seen, practically spoils it.

Specialist intervention is required. This is how you begin to understand what is happening and the need to restore natural systems.

And there is a lack of environmental education, because people are adapting to this situation, but they are not thinking about what will happen next year.

We are so selfish in all this that we see the planet as if it were ours, when in fact it is a shared planet. And Monterrey has grown, it has overflowed, invading ecosystems and this is the cost of environmental deterioration.

Today they are only hoping for rain.