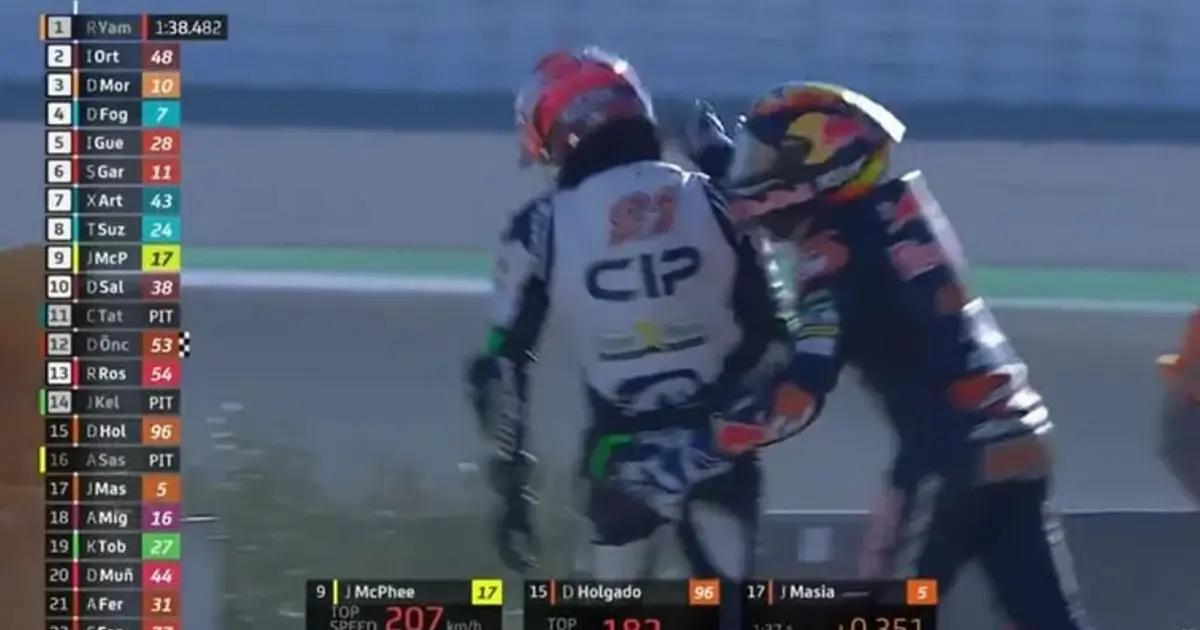 The end of the third MotoGP practice session at the Valencian Community Grand Prix experienced an unusual brawl this Saturday involving the riders Kaito Toba and Jaume Masiá. They, who were accelerating to improve their times in order to find the best possible position for Sunday’s race, closed their day in the worst way: pineapples.

The checkered flag had already been shown and both were launching their final fastest lap attempt with the intention of making it through the cutoff and straight into Q2 qualifying. The Japanese and the Spanish were left out and tried to accelerate, with the worst result: at turn 11, the Japanese opened up a bit, the Valencian got inside and when leaving, both touched and fell. There the illusion ended, sliding on the pavement, and the brawl began.

Already standing and on the gravel, Masiá ironically applauded the action. Toba approached him and a few words were said, while some auxiliaries were approaching their positions. That verbal crossing made the crossing more peppery and the Oriental dropped two slaps on Jaume’s helmet, who retraced his steps and hit Kaito with greater intensity . The commissioners, who had come, had to separate them after a third crossing, with shoves and new blows.

After the assistants took them both out of the place, everything calmed down and each one left on a scooter in the direction of their box. Of course, all of this had been too visible and embarrassing to go unnoticed.

Immediately, the Race Direction opened an investigation into the incident and shortly after the sanctions for them were known, for unsportsmanlike conduct. Thus, Masiá and Toba will have a difficult Sunday because of what they did: they will have to start the grand prix from the pit lane of the Ricardo Tormo circuit in Cheste and, later, they will have to go through the “Long Lap” area. A double penalty, after the incident that showed the most repudiated face of sport: aggression.

Finally, the classification was won by Jorge Martin (Ducati), leaving another Spaniard, Marc Marquez (Honda), in second place by 205/1000. Third will be the Australian Jack Miller (Ducati).