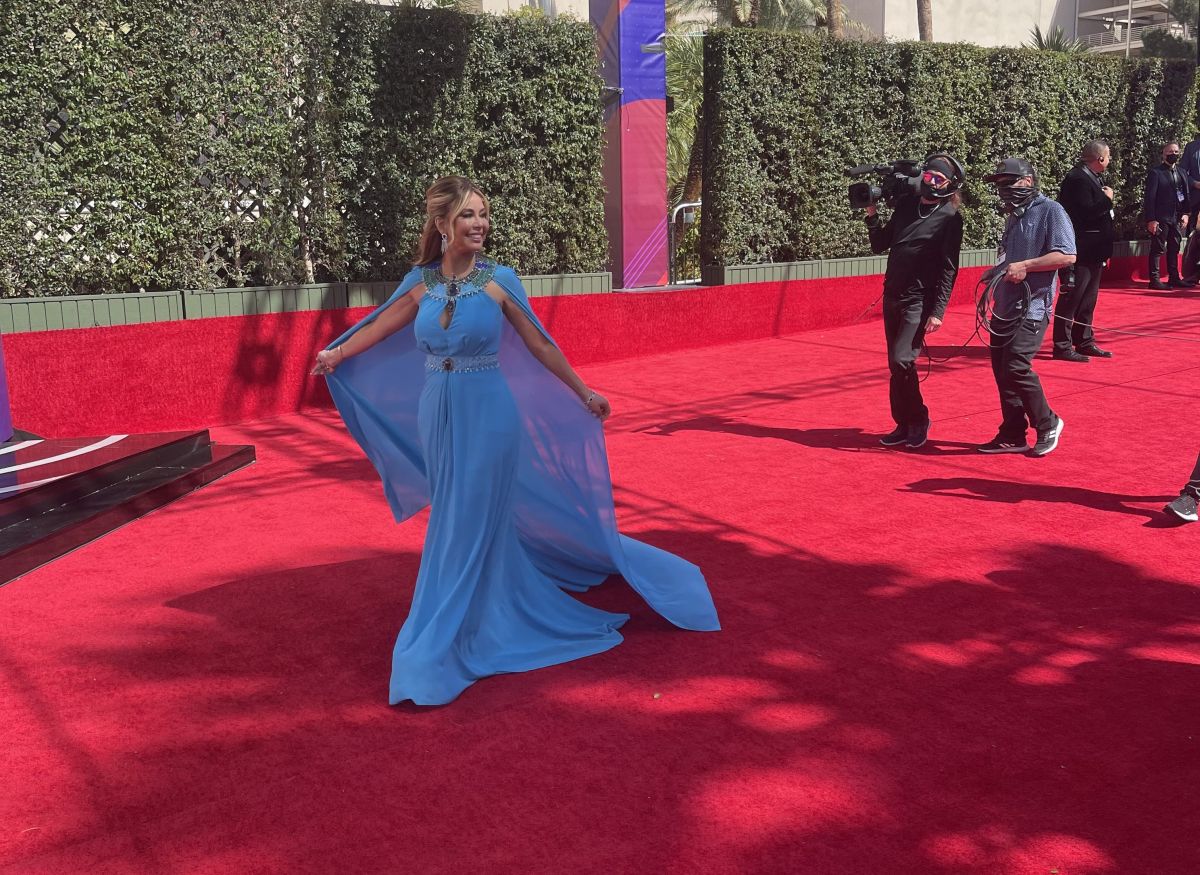 Myrka Dellanos arrived on the red carpet of the Latin American Music Awards wearing a light blue dress, who was wearing an elegant cloak from behind that covered her. As she walked she looked like a queen posing for the cameras. We overheard that he really liked this cape detail a lot. The host of La Mesa Caleinte was one of the first to parade, as well as her companions from the show, because in blocks of two they were leading the “red carpet”. Myrka drove with Giselle Blondet, while Verónica Bastos was accompanied by Alix Aspe.

The famous television host dedicated a few minutes to La Opinion de Los Angeles and the Diario de Nueva York, and told us that her dress was a Rosa Clará design in collaboration with Paloma Cuevas. The design was also exclusive to her, it was sent to her especially for this moment.

Her jewelry, on the other hand, was courtesy of Elena Jiménez and Chopard. All of which she wore very elegantly.

During her conversation with us, she told us that she experienced a tremendous accident with her dress, before entering the red carpet, and that is that someone threw her Starbucks coffee on her dress. All this liquid was spilled in the lower part of the design. The stylist told us, along with Myrka Dellanos, that at that moment she began to cry. They had to run into the room again to clean it up. When she arrived on the red carpet she looked flawless and there was no trace of this stain on her dress.

On The Hot Table

“We are having a good time -at La Mesa Caliente- and we have good ratings. I feel very blessed, to be able to have this direct contact with the public, ”said Myrka Dellanos, who also declared that she felt very blessed by the chemistry she had with her companions on the program. Undoubtedly, this can be seen on the screen, due to the heated debates they hold. Which can only be carried out when there is a connection with the work team, even when the postures are not compatible. At the end of the day, this is what the show is about, showing the different points of view that exist around a specific topic.

About her eternal youth and beauty, she tells us that time does not stop, but she tells us that she takes care of herself by having a healthy and healthy life. She also affirms that having her mother with her, as well as finding peace in God, also allows her to stay well, healthy and happy. Finding support in them during those hard times eases her burden.