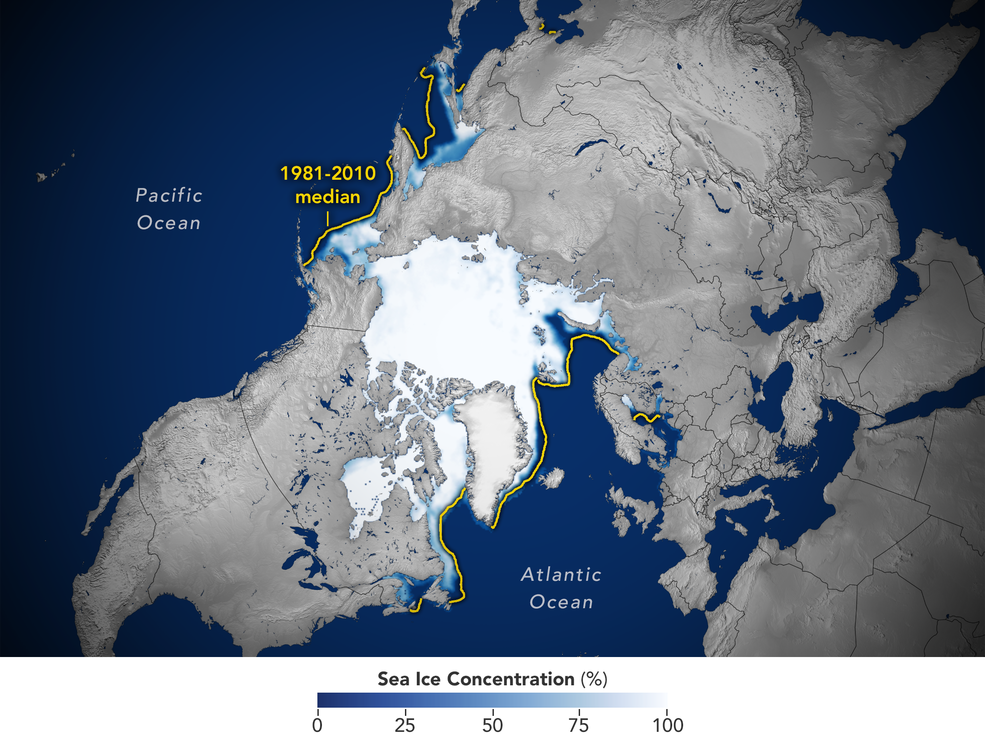 Arctic sea ice appeared to have reached its maximum annual extent on February 25 after growing through fall and winter.

However, this year’s winter extent is the 10th lowest in the satellite record maintained by the National Snow and Ice Data Center, one of NASA’s Distributed Active Archive Centers.

Arctic sea ice extent peaked at 5.75 million square miles and is about 297,300 square miles below the 1981-2010 average maximum, which is equivalent to losing an area of ​​ice slightly larger than Texas and Maine. together. This maximum is related to 2015 as the third earliest on record.

Sea ice waxes and wanes with the seasons each year.. In the Arctic, it reaches its maximum extent around March after growing during the cooler months, and shrinks to its minimum extent in September after melting during the warmer months. In the southern hemisphere, Antarctic sea ice follows an opposite cycle.

To estimate sea ice extent, satellite sensors collect sea ice data that is processed into daily images, with each image grid cell covering an area approximately 15 miles by 15 miles. Scientists then use these images to estimate the extent of the ocean where sea ice covers at least 15% of the water.

These trends are linked to warming caused by human activities, such as the emission of carbon dioxide, which traps heat in the atmosphere and causes temperatures to rise. NASA analysis also shows that the Arctic is warming about three times faster than other regions.

This February, Antarctic sea ice fell to a minimum level record. But unlike the Arctic, this sea ice has shown irregular ups and downs mainly because of the geographic features that surround it. Winds and ocean currents specifically linked to the Southern Ocean and Antarctica have a strong influence on sea ice extent.

Also read:
· The March equinox welcomes the ‘astronomical’ spring. What does it mean?
NASA detects a giant cloud of debris created by the collision of celestial bodies
Elon Musk has a new estimate of when humans will first set foot on Mars