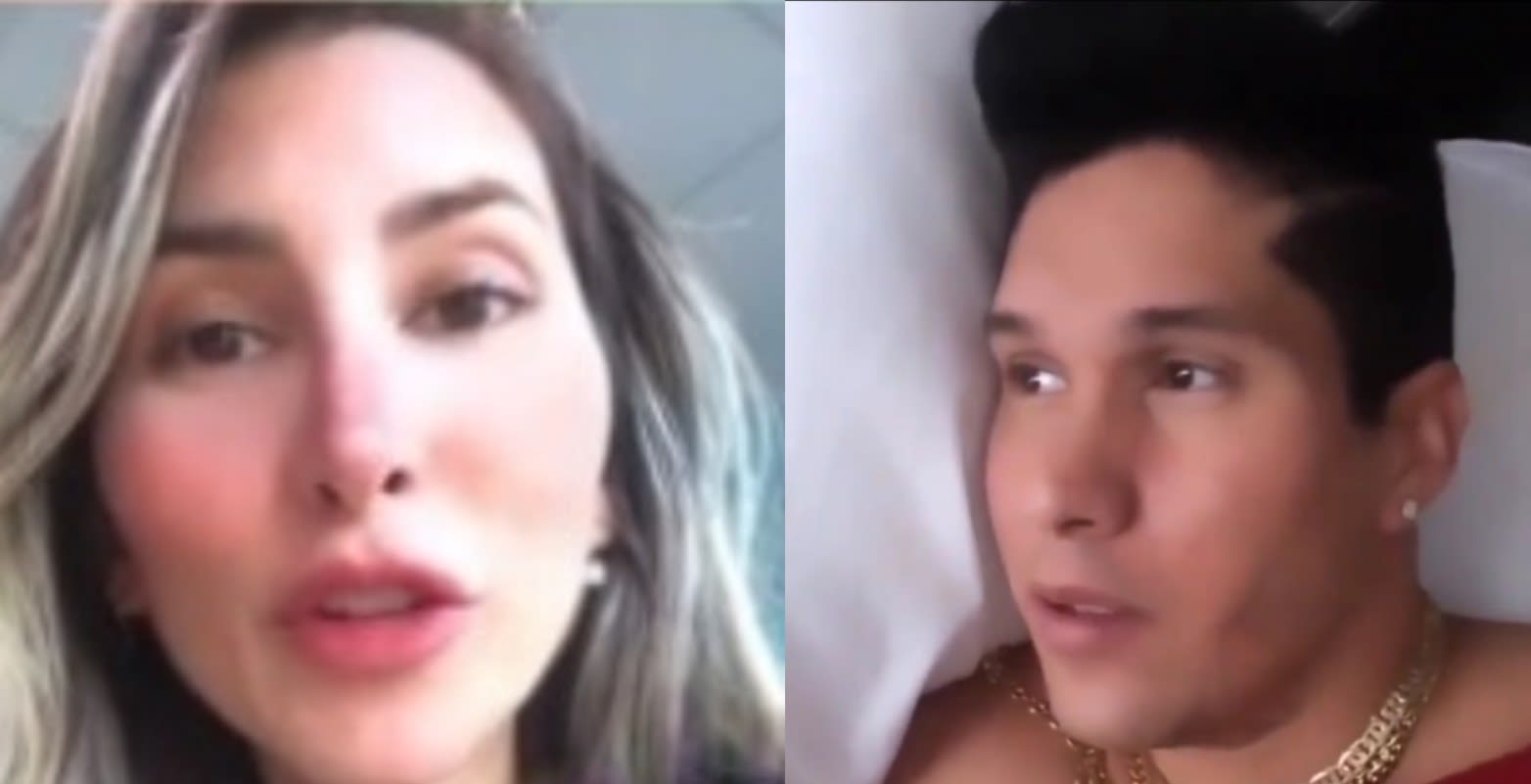 Chyno Miranda coronavirus wife. After the rumors that the wife of the famous singer Chyno Miranda ran the Venezuelan artist from her house, a video now comes to light where Natasha Araos reveals an unexpected confession that has caused Internet users to label her as irresponsible for the words she said.

Through the Chamonic 3 Instagram account, a video was shared where you can see the Venezuelan artist’s wife talking about the symptoms she felt a few days ago, stating that she even lost her sense of smell and when she was tested for the coronavirus it was positive.

Things have not gone very well for the couple of Chyno Miranda and Natasha Araos, since after it was rumored that the young woman had run from the house to the singer in full recovery, people do not forgive the still wife of the Venezuelan , and before any act that she performs seems to be watched under a magnifying glass.

Several netizens reacted to the recording of the young woman and told her that she is irresponsible, since despite having been infected, it did not take long for her to once again hold a meeting of several guests exposing her partner and risking it of being infected again.

In the video shared, the singer’s wife appears more than anything promoting the pills that a doctor prescribed for her, who assures that this drug would help her to come out negative in her next coronavirus test: “They did the test and I came out positive,” Natasha said. .

“A doctor contacts us and gives us a box, and he told us ‘if you take this three times a day, for four days you come out negative the next time they do the test’, and to a surprise I came out negative,” he explained in his recording. . Internet users immediately reacted to the post to attack Araos.

“There is nothing that will take away your COVID in 4 days…., Chyno’s wife tells that she felt bad last week and that on Friday she tested positive for COVID, and that according to she took a medicine that they gave her (what is she doing to her? promo cionnobvio) and that by Monday it was negative ”

“Wow and on Tuesday she had a meeting, Chyno delicate and she irresponsible, and again she shows Chyno so that we can see if she is with him and takes him to therapy”, was the headline of the publication of the Instagram account of Chamonic 3 , where they affirm that these acts will sooner or later have consequences.

Immediately the followers of Chyno Miranda commented on the post saying that his wife is quite irresponsible for not taking care of the health of the Venezuelan artist. Apparently the concern of the fans for the singer’s health is more than his partner: “How irresponsible more if your husband is sensitive to this virus.”

“This woman, I don’t know, if she does it on purpose. But the more she talks, the more she sinks “,” How outrageous this woman is not at all concerned about the health of her husband “,” irresponsible old woman “,” Sad that people still do not learn from the situation and trust the health of other people just for money ”,“ Good God what irresponsibility of the lady, what fear, that’s why we are like this, without being able to put an end to this virus ”, were some comments.

Chyno Miranda coronavirus wife: “Are you a doctor?”

There were those who defended her about the promotion of sideburns that undoubtedly generated a lot of controversy: “Are you a doctor? The same thing happened to me. I tested positive for COVID on a Thursday, I felt bad the same, but on Monday it came out negative. If you use a bit of common sense ”, the user began by saying.

“This means that as much as she and I had COVID for several days ago, by the day we took the test and it came back positive, we had already been with COVID for days. And when we go back to do it again (4 days later) we got negative. But it does not mean that we had COVID for 4 days, “he added. TO WATCH THE VIDEO CLICK HERE

Previously, a video was leaked where the ‘true face’ that Chyno Miranda’s wife, Natasha Araos, has towards the singer, would be revealed, where the Venezuelan appeared giving him a “pouting”. Followers of the journalist Javier Ceriani, argue that she “no longer supports it.”

A clear example was when this July 29, the Instagram page of the Argentine driver Javier Ceriani, Gossip not like, revealed a video in which Natasha Araos appeared giving the singer a “pouting”, after this, many users and followers of the journalist argued that she no longer supported Chyno.

Does it make you pout?

In the short clip, which already contains more than 69 thousand reproductions a day after being shared, it is possible to observe how Chyno Miranda’s wife, Natasha Araos, was in front of the singer, away from him, while she played with him. son they both have, little Luka.

Everything was fine, however, in the background you could hear how Chyno began to repeat “Hello” several times, without receiving any answer, later Natasha answered “Hooola”, and the singer laughed and said “That’s right” that was when the woman He turned to see the singer and, according to the words of his followers, they commented that he had made him a “pout” and that it seemed that he no longer even could stand it. Filed Under: Wife Chyno Miranda Coronavirus.

This gesture generated endless comments about it, where followers of Javier Ceriani began to argue about the “horrible” face that Natasha Araos had made to Chyno in the video, saying that it seemed that she could not even bear it anymore. A follower openly commented: “She looks at him with the face of wanting to kill him,” to which one responded: “And he’s already doing it, poor guy, hopefully and he comes out soon.”

A user commented in the publication that she was not even paying attention to Chyno Miranda: “She does not pay attention to poor Chyno” and one user replied: “If you realize not only there, in the photos she hugged the child and the husband well separated “, they assured in the video of Natasha. Filed Under: Wife Chyno Miranda Coronavirus.

“He ignores it completely”

A follower of the journalist commented that she seemed no longer able to bear it: “Her face is that she no longer supports what he says, like many inconsistencies,” to which another responds: “That’s right, she completely ignores him every time he he says hi, until he’s fed up and she answers him. ”

“Face of what he always was, he married the enemy”, “Of course he made a pouting”, “Ugh, he doesn’t even let the child get close, and what a look he gave him”, “I do see the face he made” , “Yes, the face of arrecha”, “Yes, you can see his face of ‘few friends’ as we say in Mexico“, “I hope they fix their problems”, were one of the many comments that could be read in the video. Filed Under: Wife Chyno Miranda Coronavirus.

On the other hand, followers attacked the Argentine journalist, Javier Ceriani, arguing that they really did not see any of that: “I do not see anything wrong, many times you have a bad face and it does not mean that we are wrong, what happens is that as they are predisposed that this relationship is over, they see everything badly, leave them alone ”.

“They are already passing, I do not see any face”, “Lord, please respect that family that is going through such a hard time”, “I do not see anything wrong with that face”, “How much you have screwed That woman, for God’s sake, stop saying things, what you do hurts Chyno more ”,“ That’s just gossiping like hell… ”,“ Don’t exaggerate either, I don’t see anything wrong with her in that video ” . YOU CAN SEE THE VIDEO HERE Filed under: Wife Chyno Miranda coronavirus.