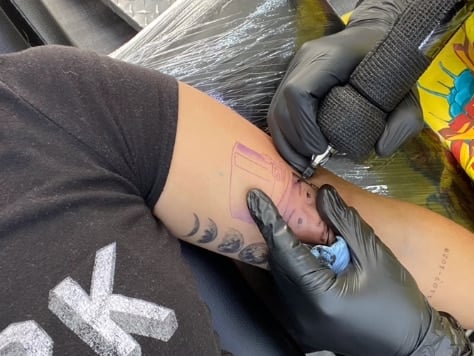 Nerea Godínez, fiancee of actor Octavio Ocaña -who lost his life on October 29 in the municipality of Cuautitlán Izcalli due to a shot in the head-, immortalized the artist on his arm.

After several months of mourning, the young woman decided to pay tribute to her former partner and took up a peculiar tattoo that Ocaña had – with some modifications – to put it on her skin. Thus, it was through his account Instagram where Nerea showed the whole process.

The audiovisual begins with an image of who embodied Benito rivers in the series Neighbors lying next to Nerea. There you can see that the actor had on his left arm a tattoo of a red-haired elf with a lucky hat and a pipe. Subsequently, the study that Godínez attended is observed and where they made a reinterpretation of the illustration that the artist had, but They changed the character’s face to make it a portrait of Octavio Ocaña.

The young woman got the tattoo in the same part where her ex-fiancé had hers and showed the result from her social networks.

Netizens quickly reacted and sent words of support to Nerea, who has received multiple criticisms since Ocaña passed away.

“You can see the love you have for my girl, he will love you and take care of you for all eternity and one day they will see each other again and they will be very happy, that tattoo will look beautiful on you. precious “,” Those who say that Nerea did not love him If a person does not love another in a relationship, they do not get a tattoo of him“Are some of the comments that flooded his publication.

It should be remembered that minutes before the unfortunate death of Octavio Ocaña, the actor was involved in a police chase where security elements chased the truck he was driving until it suddenly stopped.

Since then to date, both parents, sisters and Octavio’s ex-girlfriend have fought to clarify the facts through legal means and marches, but they have also remembered it with great affection, so they have made it known in interviews and through their social networks.

Given this, in December 2021, Nerea shared with her followers how she is grieving for the loss of Octavio and pointed out that she is still devastated by the situation.

Octavio Ocaña’s fiancee commented that it has been difficult for her to be at home, because for various reasons she remembers her partner. “I get depressed and I spend it in the street or I go to my company. I stayed there for a long time or I go to my best friend’s gym and I’m there for another time. I just come and sleep”, He counted.

Godínez stressed that she tries to keep busy and, if possible, away from her home. He commented that if he stayed at home, he would start to suffer some havoc from anxiety. Similarly, he mentioned that he can cry all day if he stays at home.

“I can’t be like this, that’s why I’m looking for something to distract myself. I go out to lunch or dinner, or I go with my sister-in-law. There I am walking because I do not like to stay here alone”Said Nerea Godínez in a clear state of distress.

Octavio Ocaña: new lawyer for the family revealed that there is a second investigation folder for “a garrafal failure”

“Your happiness was damaged enough”: Octavio Ocaña’s mother celebrated his birthday with a heartbreaking image