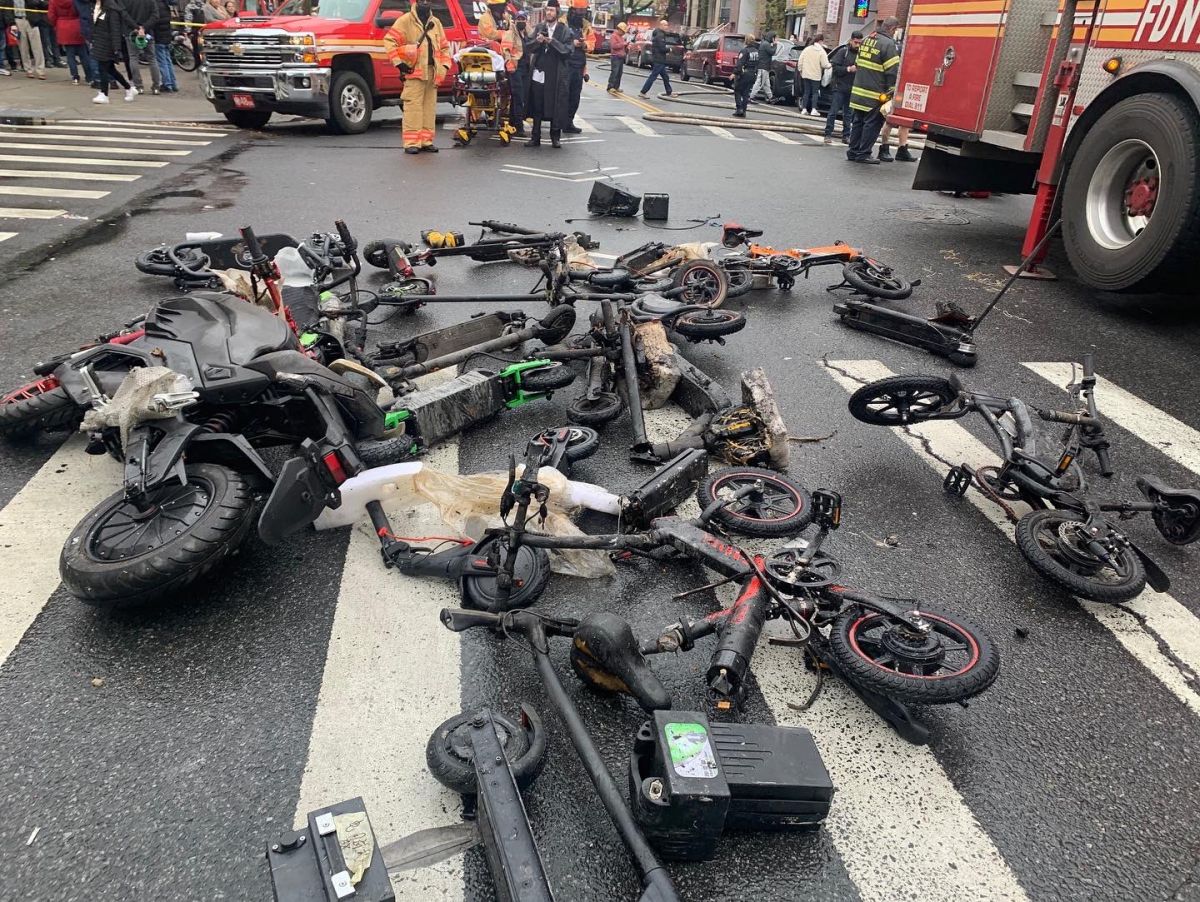 The specific origin of several devastating fires that caused deaths and injuries in New York City is turning his gaze to radical measures against electric bicycles that are charged with lithium batteries, means of transport that are the livelihood engine of at least 65,000 deliverers in the Big Apple.

According to the New York City Fire Department (FDNY), in 2021 there were 106 fires caused by explosions and combustions directly associated with these batteries, injuring 79 people and killed four.

Unfortunately, the majority of these fire incidents, which have been fatal, have been staged in Public Housing Authority (NYCHA) complexes, which is why this agency is considering prohibit the presence of these devices in their units from October 15if the proposed rule is approved.

Specifically, the municipal agency hopes that residents and their guests may not store or charge electric bicycles or electric bicycle batteries in apartments or in common areas of NYCHA buildings.

Precisely, the latest incident associated with a fire, caused by a lithium battery from an e-bike, was fatal. It happened last August 3 and killed a 5-year-old girl and a 36-year-old woman in a sixth-floor apartment in the Jackie Robinson Houses complex in Harlem.

The firefighters’ expertise was very clear: the fire came from devices used to charge an electric bicycle that exploded and the fire spread to the housing unit.

But the housing authority’s proposed rule has already ignited a lot of controversy and is being outright rejected by elected leaders and activists for the rights of deliverers.

In this sense, Hildalyn Colon-Hernandez, director of the Labor Justice Project considers it totally discriminatory to try to prohibit the presence of these means of transport without any alternative in these terms.

“They are putting people to choose between their home and their team. We have an agency that makes a regulation, without understanding how the industry works or how this affects workers. Not only the deliverers, but hundreds of people who have these bicycles as their only way of getting around,” said the activist.

The leader of the Labor Justice Project assures that it is the same charging technology used by electric wheelchairs and some electric cars who also park in NYCHA housing complexes.

“We have a very clear position. The ban will not solve the problem, but an educational campaign yes”, he concluded.

Colón pointed out that none of the proposed rules specifies what are the limits of the presence of devices that are powered by electricity in public housing buildings.

“Does this mean that the deliverers won’t even be able to park in the vicinity while deliver an order or while resting?”, he asked himself.

In the opinion of the labor leader, the real origin of most of the fires in complexes that have 1920s electrical systems.

This week, the Manhattan Councilmember Gale Brewer announced that it is drafting legislation to reject the terms of NYCHA’s proposal, but adds provisions that would ban secondhand or refurbished batteries, that are at higher risk of catching fire.

“We are worried about other fires. We must look for a balance in preserving the lives and livelihoods of thousands of workers. Our idea is to pay attention to people who sell refurbished batteries, because that is where the problem lies. Also, in the case of NYCHA, they have many outdoor parking lots, which seem to be the best location to place safe charging stations,” reasoned the local legislator.

In this sense, the Guatemalan deliverer Miguez Díaz, 25 years oldwarns that used or second-hand batteries are a cheaper alternative, because one of the latest generation can cost up to $1,000.

“I don’t live in one of those public housing buildings, but it’s getting harder and harder to find a safe place to charge the battery. I rent a house in Brooklyn and the owner told me that she no longer accepted the bicycle. So this costs a lot because I have to pay at a place three blocks away to store it,” Miguel said.

The deliverer also shares that when the batteries “are old” they must be charged all night, and sometimes they must even have another spare, to able to complete the day all day.

Usually the safe and certified batteries They come with an Underwriters Laboratories (UL) label, which means they meet nationally recognized safety standards.

Therefore, the legislation proposed by Councilwoman Brewer aims to require the Department of Consumer and Worker Protection an aggressive campaign of battery safety guides in stores that sell these products.

There is a real danger, but…

Likewise, Cynthia Tibbs, President of the West Side Urban Renewal Brownstones Tenants Association, He says that he has seen very dangerous situations in buildings because of the way tenants carry this equipment.

For example, he claims to have seen people run extension cords out of their apartment windows onto the street in the rain to charge these batteries.

But despite the dangerous situations he witnesses, the community leader highlights that she still does not see a clear solution in banning bicycles.

“People will continue to do so and risk eviction, and it’s not just NYCHA buildings where they pose a risk. We don’t want the ban because, at the end of the day, people need to make a living,” Tibbs concluded.

A NYCHA resident, the Puerto Rican Santa Sarmiento who has lived for 20 years in Amsterdam Houses in Manhattan, assures that everything that is regulated in NYCHA is “dead letter”. And banning those teams won’t make a difference.

“It is forbidden to smoke inside the apartments, to throw garbage out of the windows, to turn up loud music, to use the stoves as heaters, but no one cares. We must understand that most things happen through people’s lack of education.” finished off

Not a NYCHA problem

Last May, an event once again triggered alerts about the risks of these loading equipment, in all commercial and residential spaces in the Big Apple. A three-alarm fire displaced several residents of a building in the 5401 Seventh Avenue at Sunset Park in Brooklyn.

Authorities confirmed that there was a grocery store in the building that also sold electric bicycles.

Firefighters spokesmen said the fire was caused by ion batteries in electric scooters and bicycles that were found in the building, as well as a hundred more that were confirmed this year.

The keys to the Brewer proposal:

Why do these batteries explode?

The National Fire Protection Association (NFPA) explains that lithium battery fires occur for a number of reasons, including:

To submit a public comment related to this new rule banning e-bikes and their chargers from NYCHA complexes, please email by September 6 to [email protected]