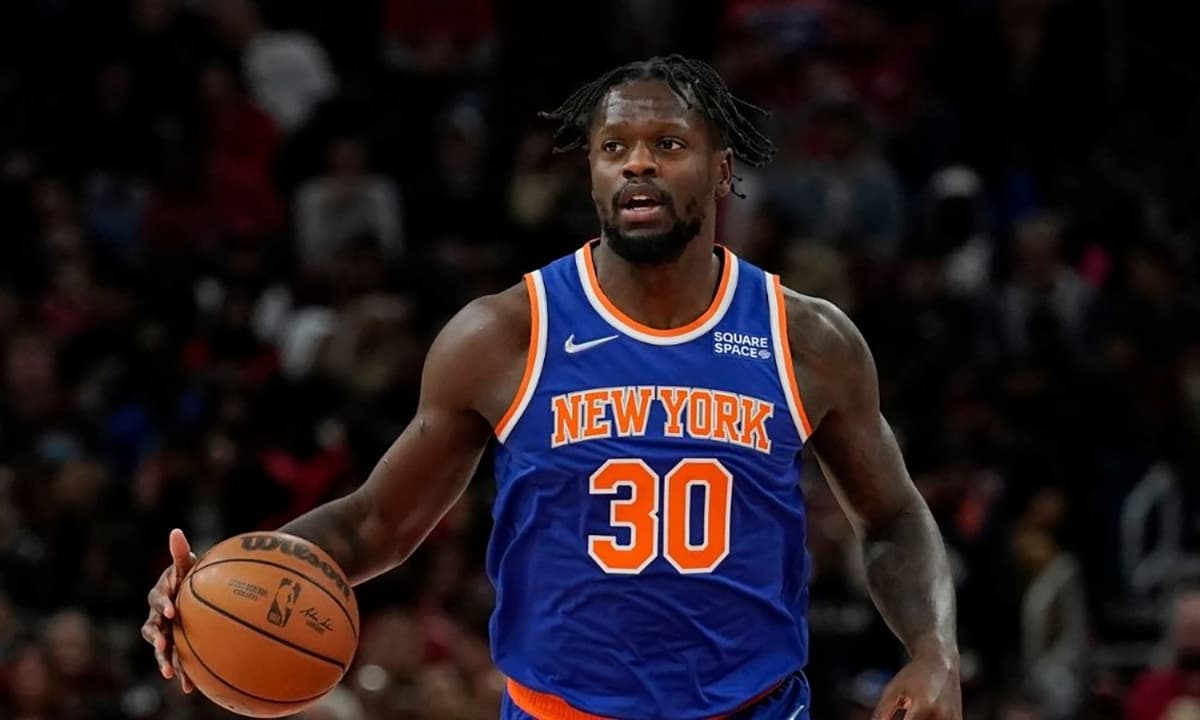 Coming off a disappointing 2021-22 season, may the New York Knicks look to bring back one of the best players in franchise history?

Citing a source, Marc Berman of the New York Post (h/t Peter Dewey of Ahn Fire Digital), reports that the Knicks have internally talked about the idea of bringing back pending free agent Carmelo Anthony.

The 10-time All-Star arrived in New York in a blockbuster deal via the Denver Nuggets ahead of the 2011 trade deadline. Anthony stayed in The Big Apple for the next six years before getting traded to the Oklahoma City Thunder in Sept. 2017.

Over his seven seasons with the Knicks, Melo averaged 24.7 points, seven rebounds, and 3.2 assists per game. New York made the playoffs in each of Anthony’s first three years with the team.

Online and mobile sports betting went live in New York back in January. The FanDuel New York Sportsbook is one of the major players in the Empire State, and they’re offering new customers $200 in risk-free bets if they place a $5 wager.

The Knicks are one of many teams in The Empire State that New Yorkers can bet on. Customers can place on straight-up winners, the spreads, over/under, money lines, and futures (division and award winners, champions, draft selections, and more).

Anthony joined the Lakers last summer in hopes of winning a championship ring with LeBron James, Anthony Davis, and trade pickup Russell Westbrook. The Lakers, however, finished with a horrendous 33-49 record to miss out on the postseason.

The 38-year-old Anthony fared well in a limited role with the Purple and Gold, averaging 13.3 points, 4.2 rebounds, and 1.0 assists per game.

The Knicks, coming off a disappointing 37-45 record, could certainly use Anthony’s leadership and depth scoring as they look to get back into the postseason.

While the Warriors eye dynastic status, the Celtics are looking to win their first championship with the young core of Jayson Tatum and Jaylen Brown.

Warriors’ big man Draymond Green, who spent three seasons with Brooklyn Nets’ superstar Kevin Durant in GoldenState, offered some high praise for the 24-year-old Tatum — comparing him to the future Hall of Famer.

“The only player that you can come even remotely close to comparing him to in this league is Kevin Durant,” Green said on ”The Draymond Green Show” podcast (h/t Nick O’Malley of MassLive.com). “And we all know how I feel about Kevin Durant and what I think about him on the offensive end. One of the greatest scorers we’ve ever seen.

“Now, Jayson Tatum is like a young version of that. Obviously, he doesn’t have all the experience that Kevin Durant has. Kevin is in his 15th or 16th year, J.T. is in his fifth and you’ll continue to see that growth. But nonetheless, who he is right now is absolutely amazing.”

Tatum earned his third straight All-Star nod in 2022, having averaged career bests in points per game (26.9), rebounds (8.0), and assists (4.4). Tatum has led Boston to the postseason in each of his first five seasons, including three Eastern Conference Finals (2018, 2020, and 2022) and of course this year’s NBA Finals — the franchise’s first appearance since 2010.

Now, Tatum has a long way to go to achieve KD’s level of greatness. Aside from his two championships and 2014 MVP award, Durant is a 12-time All-Star and a four-time scoring champion.

But as we saw in the Celtics’ sweep of Brooklyn in round one, Tatum certainly has the potential to impact a franchise the way Durant has for three teams (Golden State, Oklahoma City, and Brooklyn). He may not reach Durant’s all-around skill set or accomplishments, but Tatum is unquestionably on the path to a Hall of Fame career.

Aside from a potential reunion with Anthony, the Knicks could also be eyeing two standout guards to improve the offense.

Earlier this month, SNY’s Ian Begley reported that the Knicks are set to hire Rick Brunson as an assistant coach. Bleacher Report’s Eric Pincus noted that it “isn’t a coincidence”, as the Knicks could be looking to trade for Brunson’s son, Jalen.

The Knicks lack the cap space to sign Brunson, but Pincus wrote that “multiple sources believe Dallas may blink at Brunson’s asking price, compelled to sign and trade him to the Knicks.”

Brunson averaged 16.3 points, 3.9 rebounds, and 4.8 assists per game for Dallas — helping them advance all the way to the Western Conference Finals.

If the Knicks can’t complete a deal for Brunson? Bleacher Report’s Jake Fischer reported that Indiana Pacers guard Malcolm Brogdon could be another target.

Fischer reported that Tom Thibodeau’s team has “been linked to Brogdon in recent days by league personnel.”

Per Fischer, the 29-year-old standout “has been mentioned as one of several potential backup options” if the Knicks don’t move up from the No. 11 spot in the draft or fail to land Brunson.