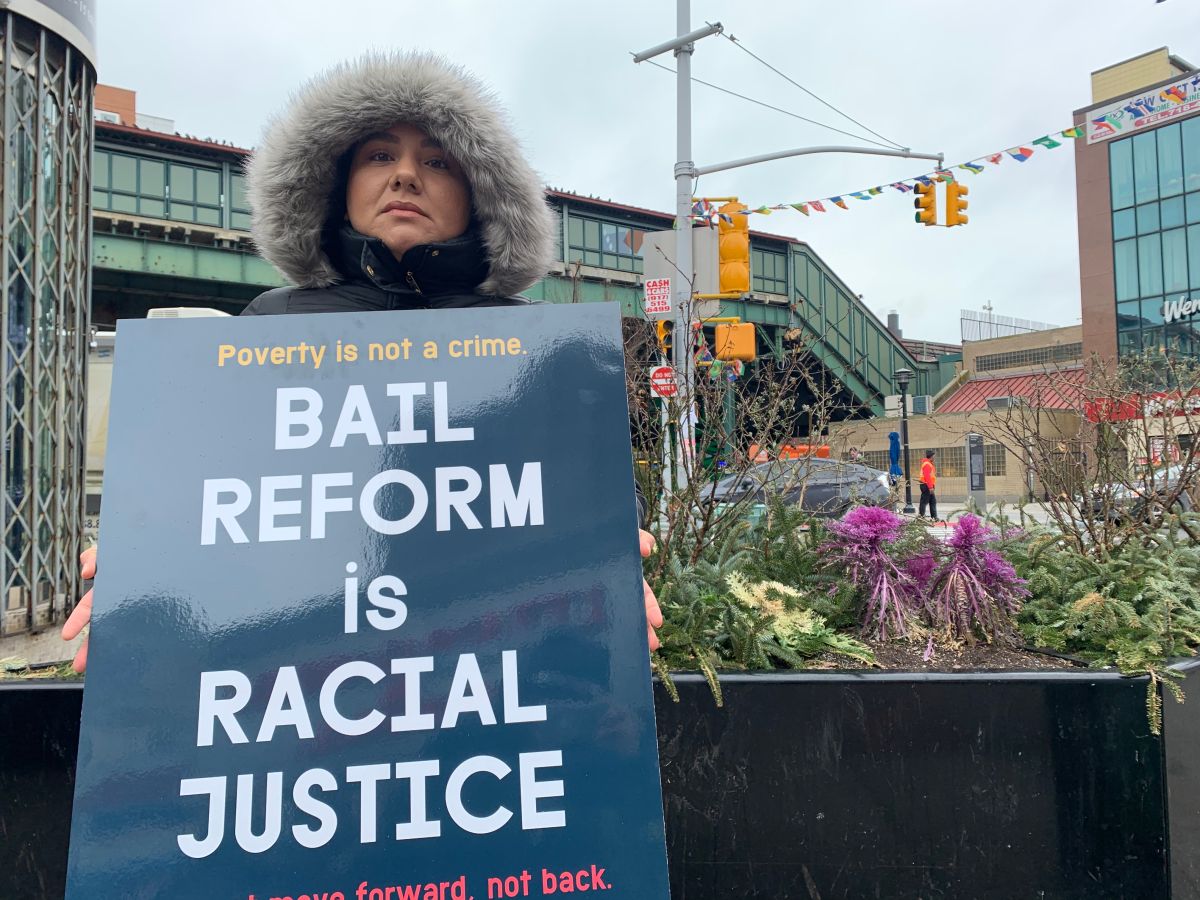 Eric Adams He’s been running the reins of New York City for just four weeks, and though so far he seemed to be living a ‘honeymoon’ with Albany, Last week the first big difference with the State was presented.

After presenting his master plan to stop the rampant armed violence in the five counties, the local president urged the State Legislature, with a progressive majority, to review and go back on the scope of the bail laws and the increase in the criminal age, legislation to who blames for influencing the increase in crime in the Big Apple, but Albany has made it clear that his plea has no echo there.

The adams cry intends to change the Bail Reform Law, which took effect in January of last year, which prevents judges from posting bail on almost all misdemeanors and non-violent crimes as a requirement for a detainee’s release pending determination of guilt or innocence.

“New York is the only state in the country that does not allow a judge to detain a defendant who poses a threat to the community. The judges must be able to evaluate the criminal record of the accused and the circumstances of the alleged crime to arrest people who represent a threat to the safety of the community”, is the thought of Adams, while asking that minors be held criminally responsible. 18 years for offenses related to weapons, not because it seeks to punish young people, but because there are consequences for those who are taking advantage of the law.

On this particular, the Mayor assures that this law (‘Rise of Age’) “is being used as a loophole for gang members to demand that youth under the age of 18 take the blame for weapons that are not theirs”, and insists that the State repair its presumed effects.

But from the Legislature it has not taken long for voices to be raised en bloc against Adams’ call, which almost left his petition dead at the beginning of the road.

Political leaders, who defend both laws as acts of justice and a brake on the criminalization of poverty, which for years determined whether a detainee, depending on the money he had, could be released or in prison awaiting trial, share the president’s concern about the urgency of stopping delinquency, but they say not through the regression of justice.

What do the figures say?

And it is that despite the fact that different sectors, as stated by Mayor Adams, have tried to blame the increase in crime as an effect of the Bail Reform Law, which came into force in January of last year, state figures indicate something else .

According 2020 stats, Of almost 100,000 detainees who were provisionally released last year, without payment of bail, only 4% were re-arrested for violent crimes committed after leaving prison.

For the Mayor, as for many concerned New Yorkers, 3,460 people released after committing serious criminal acts or violent crimes, 773 of them arrested with a firearm, is a very high figure that would demonstrate the dangerous impact on security. Despite this, the percentage of subsequent criminality among those released without bail before and after the law came into force has remained almost intact, going from 95.44% of those released in 2019 without committing new crimes to 96.14% without crimes in the 2020.

The State Senator Julia Salazar, one of the main promoters of the justice reform laws in Albany, dismissed the Mayor’s call and explained that trying to associate the increase in crime with the implementation of initiatives that “have served to do justice to poor, black and Latino communities , which have been criminalized for years”, is not the solution to the wave of violence that is shaking New York.

“The Mayor’s suggestion that crime in the city is a result of the criminal age increase laws and the bail law is impulsive and not based on any evidence or data. I think it’s an attitude
reactionary, especially when we know that there is data that reveals that bail bonds do nothing to prevent crime”, assured the legislator of Latin origin.

“These two laws have tried to make the penal system in New York a little more equitable, because for many years, something like money bail, which sought to ensure that a detainee return to court and not prevent him from being released. , criminalized thousands of poor people who could not pay, creating a system that treats people with money completely differently and we are not going to allow us to go back to that,” added Salazar, who is the Chair of the State Senate Committee on Crime and Jails.

“These laws will not end”

The political leader assured that in conversations with her colleagues and listening to many legislators, there is a consensus that the two laws have had a positive impact on the lives of thousands of New Yorkers and stated that she does not believe that any plan will be brought to the table to reverse them.

“There is no appetite here to end laws that have been spent so much time and analysis over the years, and although we obviously take security issues very seriously, we believe that other policies must be moved to deal with crime, and that the Mayor must focus on that, ”said the Brooklyn senator.

“I don’t know what is motivating the Mayor to say these things, but I feel that it is the result of the pressure that he receives from reactionary forces and police units that are interested in seeing more police work and incarceration, but I hope that he will consult more with the their teams and recognize that the fight against crime is not done with the intention of ending these laws”, emphasized Salazar.

Meanwhile, the also State Senator Jessica Ramos, other of the most prominent figures in the Legislature and a fighter for justice reform, expressed concern that the City is attempting to re-associate laws that have favored communities with crime, and mentioned that there are other ways to tackle crime at its roots.

“There are things to be optimistic about in the Mayor’s plan: an investment in summer youth employment, a greater emphasis on mental health interventions that address the root causes of crime and harm. That said, reintroducing the dangerousness standard, trying to undo the criminal age increase law, and blaming bail reform, they are poorly concealed whistles that allow racist police and judicial practices“said the Queens legislator.

“The data on bail reform is strong, and we need to legislate from a place of fact, not fear,” he said. bouquets, adding: “I remain committed to passing the ‘Treatment Not Jail Act,’ so we can expand proven redirection programs, and enact true public safety.”

Leaders of the Legislature and Governor oppose

The majority leader in the Senate, Andrea Stewart Cousins spoke out against the association that the Mayor intends to make between crime and bail reform, clearly showing that there is no echo for Adams in that way.

“It is unfortunate that people have discovered that this is a very easy way to demonize the side and not do much work,” the senator commented, noting that giving judges discretion to apply bail would trigger disproportionate acts against Blacks, Latinos and poor people.

The President of the Assembly, Carl Heatie, He also showed his opposition to the Mayor’s request and although he admitted that the issue will surely be rolling, he assured that the crime has nothing to do with the bail law.

“We’re going to have a lot of discussions about this… but I think there are certain things that people could do in terms of stopping disinformation,” Heastie said. “Can we stop blaming bail reform when the sun comes up? Can we stop trying to make political fodder.

On the criminal age raise law, the politician added: “A lot of the concerns around ‘Raise the Age’ could really be addressed in terms of the Probation Department and pretrial services because they can decide what the pretrial services are. to the judgment that people have before they have to appear in court”.

The Governor Kathy Hochul joined, without going into detail, the opposition, and although he has been on the same river with Adams on many issues since he was elected Mayor, the call to review the bail law passed in 2019 is a thorn, for what he anticipated will be on the side of the legislators.

“I will absolutely back the foundational promise of why we needed bail reform in the first place,” Hochul stated.

And despite the fact that she has no power in the decisions of the State, from the Municipal Council, the president of that legislative body Adrianne Adams, He went against the Mayor’s call and agreed with the voices of Albany.

“The data and evidence do not support that the state’s bail law is responsible for the increase in gun violence, so changing it cannot be our solution,” said the municipal leader. “We need to focus on a comprehensive set of solutions that are effective in preventing crime and violence before they occur. This must include increased support for violence prevention programs, mental health care and crisis intervention, and youth programs that have been shown to help youth avoid violence altogether.”

Facts about the impact of the Bail Reform Act: