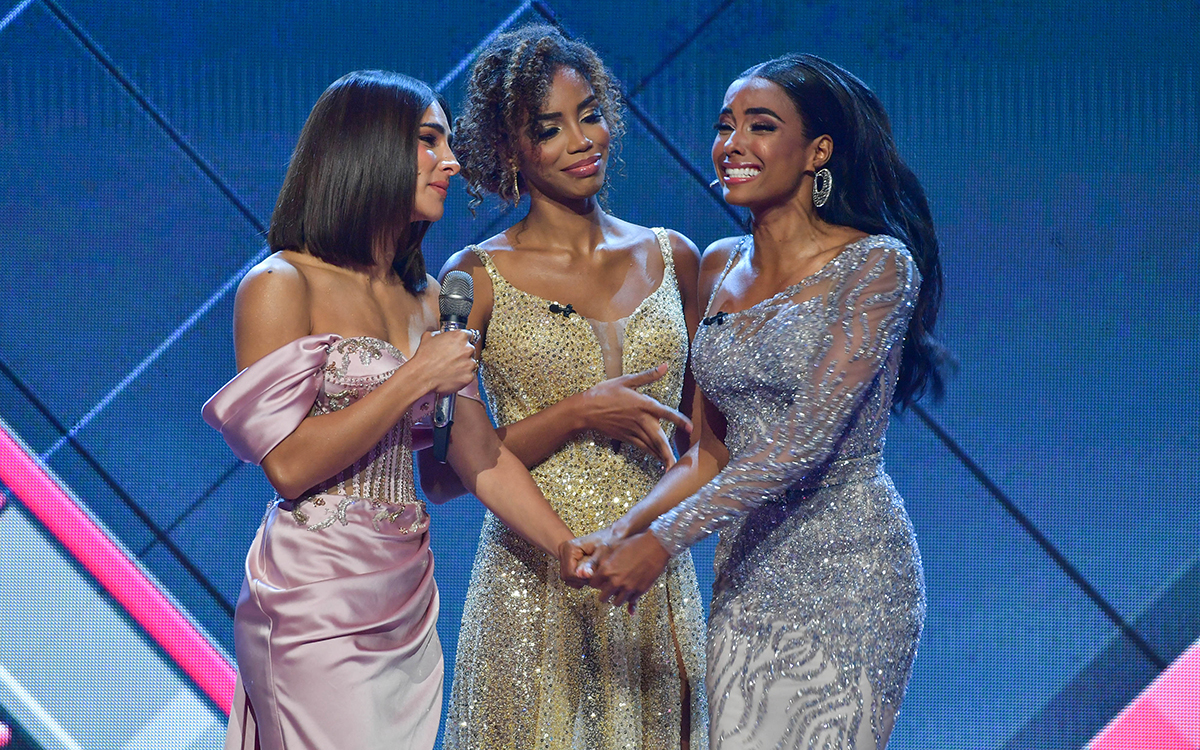 One step away from the semifinal of ‘Nuestra Belleza Latina’, Clauvid Dály, the former Miss Dominican Republic who came to the Univision reality show to be the standard bearer against bullying and discrimination, was eliminated from the competition as she was not saved either by her teammates or by the judges.

During the seventh gala, Univision threw the house out the window or rather, polished the floor, raised the temperature. The presenter, Alejandra Espinoza, reminded her that in reality ‘this is how you dance’.

As we told you, during the gala prior to the semifinal, the contestants took the challenge that Marisela de Montecristo imposed on them, they danced with a gentleman from the media.

The night on the track It was opened by Lupita Valero, who was accompanied by Gabriel Coronel with a Mexican quebradita. Later, he would have the surprise that her performance led her to be chosen by the jury made up of Giselle Blondet, Daniella Álvarez, Adal Ramones and Jomari Goyso as the favorite.

Lupita was followed Fabién de la Concepción, who honored his Cuban roots by dancing a salsa with Dominican actor Juan Vidal. With the ease that characterizes her, she defended herself by shaking her hips, but making it clear that dance is not her thing.

But the dance was not the highest moment of the night for Fabién, since at the end, the production had a surprise for her: the visit of her husband Pedro, whom he has not seen since he entered the Univision reality show. The young Cuban not only I couldn’t stop crying, but I wouldn’t let go of it either! And for them there was an explanation that she herself gave: “He is my everything, my whole family is in him, he is my dad, my mom, my sister, my friend, my husband, my boyfriend, my everything.”

This loving moment was followed by one of a great challenge: that of Raishmar Carrillo, who danced urban alongside digital content creator Marko. Why challenge? Because for The young Puerto Rican and due to her history of abandonment and abuse, not only has she not had much opportunity to dance, but she has a whole taboo subject with sensuality.

However, like many of the trials that he had to live, he went ahead and with A smile conquered the track, Marko and the jury who congratulated her on her performance and encouraged her to do something different.

After Raishmar came another HOT moment, fun, but that ended with a lot of crying. We refer to the bachata that Génesis Suero and chef Yisus Díaz danced, who is also the last winner of ‘Mira Quien Baila’.

The impact of Genesis’s mother’s visit was not only for her, who would not stop crying, but also for Raishmar, who collapsed upon seeing an image that she will never be able to seeWell, let’s remember that she was separated from her parents since they had serious drug problems.

But Carrillo was not the only one who was affected by the visit of Génesis’ mother, also her dance partner, Yisus, who right on that track, when he participated in ‘Mira Quien Baila’ his mother, Doña Gloria, passed away and not only that, on this day it was 8 months of that fateful day for the chef of ‘Despierta América’.

At this moving moment, a very sensual one came to her, so much so that it helped the participants to break their taboos with dance. We refer to Sirey Mirán, who danced a tango with Toni Costa. Why taboo? because the Honduran candidate She said that being a Christian her parents would not let her go to many dances and that she had rarely danced with such a close-knit man.

Well here, Hand in hand with Toni, she broke all those taboos, and at the end of the dance she thanked the “teacher”, as she called Costa, for helping her eliminate her fears and understand that music and dance is a creation of God.

The Mexican rhythm returned to the track with Jaky Magaña, who was accompanied by the choreographer of ‘Mira Quien Baila’, Juan Carlos Nicot. It was impressive to see her dance so well, something that they rescued the judges when Jomari stressed that everything she did, she did well, that she went on stage and everything lit up.

The last dance was left for maybe the most daring of the night, Clauvid Dáily, who would later be eliminated as one of the three least voted, and not be saved by her companions, nor by the judges. But before that danced with Roberto Hernández from ‘Enamorándonos’ a contemporary rhythm.

After the presentations that I eat well Alejandra Espinoza hinted, with her phrase of ‘Así si se baila’, surpassed the choreographies, costumes and staging than that of her direct competition, ‘Así Se Baila‘ from Telemundo, it was time to find out who went to the semifinal, and who was left on the road.

While Raishmar, Jaky, Sirey and Fabién went directly to the semifinal, Lupita, Génesis and Clauvid were in danger of elimination, as they were the three least voted by the public.

Lupita was saved by her companions with three votes, and the jury gave Genesis a new opportunity under the observation that he does not lean so much on his humorous personality and focuses more on tests. So Clauvid, steps from the final and a gala of the semifinal, became the eliminated this Sunday.

Next week comes the semifinal, where the teammates will no longer be able to save anyone, but it will be the decision of the jury and the public, because once again the 6 remaining candidates are in danger of elimination.