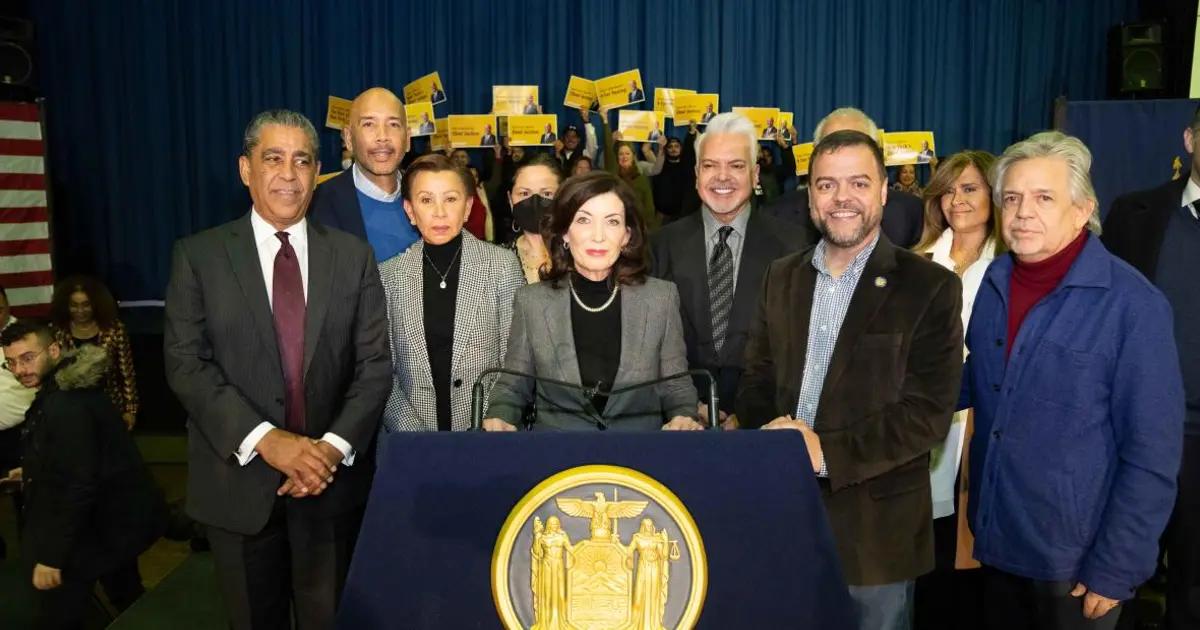 Is the name of Judge Hector LaSalle, the first Latino in history to be nominated to preside over New York’s highest court, totally crossed off the list? Does the vote of a state Senate Judiciary Committee, which denied his nomination Wednesday, mean the final word?

Given the two questions above, there were many interpretations as of Friday. Kathy Hochul’s political will to continue defending her position “tooth and nail” in front of state legislators in the face of what she called a “selection based on the best credentials, but evaluated in an unfair hearing.”

Indeed, the question remains whether the governor will go to court to seek a new vote: “We are considering all options,” she said Thursday.

Groups supporting LaSalle’s ascension as chief justice of the New York Court of Appeals continue to push that step.

Specifically, the big lingering doubt is around the interpretation of the state Constitution, which states that an appellate court judge nominated by a governor must be confirmed with the “advice and consent” of the Senate.

At this point, it is not entirely explicit whether the members of the 19-member Judiciary Committee who voted to stop this nomination this week adequately represent that entire legislative chamber.

Technical interpretations of whether LaSalle’s nomination “still stands” and must now undergo a new voting process, with the full chamber, persist because the Senate has not rejected any nominee to preside over the Court of Appeals since this system was implemented in the 1970s.

There are already diverse opinions. For example, former New York State Chief Judge Jonathan Lippman, who also joined the leading voices of “Latinos for LaSalle,” considered that there are technical elements to consider that the nomination “still stands” because it has not been submitted to a vote by all members of the Senate.

“From my point of view, attached to the law, this nomination must be denied or confirmed in a session of the full Senate. There is no such thing in the Constitution that the final word on this matter rests firmly on the decision of a committee,” the jurist asserted.

Lippman indicated that, ultimately, what is at stake is not an office but the flouting of constitutional procedures amid political polarization.

“Any other way of doing this threatens the constitutional design. LaSalle has all the credentials to be confirmed. And he deserves a fair next hearing where credentials, merits, his legal rationale are verified. Not a political debate between left and right,” he added.

Senate: “There is nothing to review.”

When Hector LaSalle’s name surfaced as Gov. Kathy Hochul’s nominee on Dec. 22, several groups, including Democratic legislators from the progressive wing, made clear their fears that the Long Island-born judge’s record, born on Long Island to Puerto Rican parents, pointed to his alignment with conservative judges on the Court of Appeals.

In short, his critics have defined LaSalle as “anti-abortion, anti-union, anti-immigrant and anti-due process” after bringing to the table a series of “controversial” rulings with which he has been associated in a 14-year judicial career.

In contrast, several organizations, bar associations, and elected leaders of the Democratic Party continue to reject the “conservative” label, noting that the Judiciary Committee has been associated with a series of “controversial” rulings in his 14-year judicial career and pointing out that the Judiciary Committee did not follow the process of reviewing his credentials. That ended in a vote on Wednesday that is unclear whether it simply cooled or entirely halted his nomination.

On this complicated-looking path, Senate Majority Leader Andrea Stewart-Cousins outlined her position, making it clear that in her view, there is nothing more to review: “There are those who do not accept the Senate’s role in this process. And they will not be happy unless we act in their favor.”

But in an interview before local media, Judiciary Committee Chairman Brad Hoylman-Sigal reasoned that in the New York Constitution, the state Senate is within its powers, as is the state Assembly, to set its own rules on how to proceed with nominations.

“We use a committee process, plain and simple,” the Manhattan Democrat asserted.