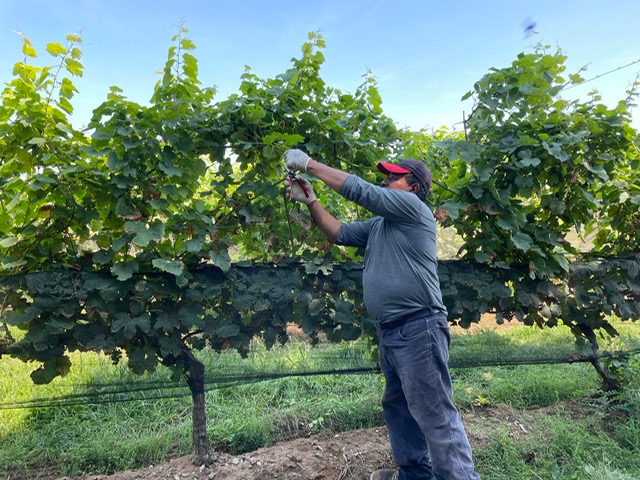 The Labor laws of the state of New York warn that the working day regular in most industries is 40 hours, and whoever works more than that limit must earn a higher additional payment for overtime.

But this rule does not apply to employees of the agricultural industry (mostly immigrants), who in a fact that many describe as a clear example of racial and economic injustice, by law, are only protected to receive extra payments after 60 business hours.

So he confesses Leticiaa mother of a family who has been working in the fields in New York for years, and who this Wednesday joined the call for the work Department put once and for all an end to exclusion and second-class treatment that agricultural employees receive, and put them in the same bag as the rest of the workers, paying them overtime after 40-hour days. That was the recommendation he made last January the State Department of Labor Wage Board to move the overtime threshold from 60 hours to 40 hours, and that on Tuesday it was officially transmitted to the commissioner of the Department of Labor (DOL), Roberta Reardon, who now has 45 days to accept, reject or modify the proposal and pronounce no later than next October.

“I have to work every day and a week I work from 60 to 70 and even 80 hours, something that affects the health and development of our children. Working like this, we can’t be on vacations, school events, medical visits don’t leave us time to help them with their tasks or spend time with them, and still, we don’t earn overtime,” said the agricultural worker.

“We want to earn overtime. So my life would change in all aspects and I would not feel so exploited in the workplace; we want to be heard and not excluded“, added the employee of the agricultural sector. “That is why we are asking the governor and the Department of Labor to recognize that overtime pay is after 40 hours and that it be done by law. Don’t look down on us. The work we do is hard and we do not deserve more exclusion. we want equality“.

Since 2019, when the Legislature passed the Farmworker Fair Labor Practices Actwhich improved many aspects of the labor plan for these employees, established the payment of overtime after 60 hours a week, and although it asked the Department of Labor to convene a salary board to decide if that threshold should be reduced, that agency has not implemented changes yet, which even supports Governor Hochul.

If the Farmworker Wage Board recommendation is approved, things would begin to gradually change to a 40-hour overtime threshold for farmworkers for ten years beginning in January 2024. With this proposal, things would start to change for workers in two years, when the overtime threshold would experience its first reduction, with extra payments after 56 hours. Then the threshold would continue to drop by 4 hours every two years, until it reaches 40 hours in 2032.

Leaders of workers’ defense organizations joined the call, demanding that in order to improve fair working conditions for the estimated 30,000 to 70,000 workers in agriculture in New York and the exploitation is ended, from now on he is granted the same rights as any other worker regarding overtime.

“Paying farmworkers overtime isn’t just the right thing to do. It will also boost the agricultural economy of New York towards modernization. When farm owners have to pay overtime, it pushes them to be better managers,” he said. David Dyssegaard Kallick, director of the Immigration Research Initiative. “There is a cost to farm owners, to be sure, but it is not a dollar-for-dollar cost and, in the long run, it will make New York State’s agricultural economy more resilient and competitive.”

Jessica Maxwellexecutive director of Workers Center of Central New Yorkwas optimistic about change soon, as the Wage Board has recognized the injustice being done to these workers and issued recommendations to phase in a 40-hour threshold for overtime pay for farmworkers .

“We are excited that New York State is finally catching up with California, Washington and Oregon to become the fourth state to switch to a 40-hour work week for farmworkers.“, said the activist, at a time when the ball is in the hands of the state authorities that govern labor matters. “We urge the Department of Labor and the Governor to expedite implementation, given the multi-year deliberation and hearing process and lengthy timeline for incorporation.”

Lisa Zuckerlegislative affairs attorney the New York Civil Liberties Unionassured that it is time to act quickly to correct the injustices and exclusion with which farm workers have been treated.

“Farmworkers have waited more than 80 years for an end to the racist exclusion that has robbed them of countless hours of overtime pay. Governor Hochul and Commissioner Reardon must prevent another generation of workers from suffering by unequivocally accepting the Wage Board’s recommendation,” said the advocate. “With Governor Hochul’s more than dollar-for-dollar refundable tax credit, there’s no reason the overtime limit can’t be immediately lowered to 40 hours, eradicating this racist Jim Crow policy once and for all.”

Murad Awawdehexecutive director of the New York Immigration Coalition (NYIC) He stressed that immigrant farm workers are the ones who feed the state because without their labor the agricultural industry and food supply could not exist.

“Nevertheless, are inexcusably excluded from the right to receive fair compensation for overtime pay after 40 hours of worka remnant of Jim Crow’s racist legacy of excluding farmworkers from labor rights,” said the immigrant community advocate.

“For too long, farmworkers have been forced to bear the burden of a biased system and they have been paid less for their overtime work than the rest of the workforce in the state. It is time for the DOL to act quickly to implement this recommendation and treat farmworkers fairly and with the dignity and respect they deserve.” Awawdeh.

Stuart Appelbaumpresident of the Retail, Wholesale and Department Stores Union (RWDSU) acknowledged that in 2019, the State took a bold step when it enacted the Fair Labor Practices for Farmworkers Act, but criticized that it has fallen behind on issues of labor justice, by not giving farmworkers a 40-hour workweek with overtime pay.

“Farmworkers deserve the same dignity and respect on the job as other workers in the statemost of whom are already entitled to the 40-hour workweek,” he said. the union leader. “Let’s get it right and bring full justice to farmworkers. The Department of Labor has an opportunity to give farmworkers equal rights and protections, so we urge swift adoption of this plan to right the wrongs of history.”

Following the demand of workers and organizations that defend agricultural employees, the New York State Department of Labor (DOL) stated that the recommendations are being analyzed.

“Commissioner Reardon received the official report from the Farm Labor Wage Board and is currently under review. The Commissioner’s decision will be announced in the coming weeks.”

If the recommendations are adopted, this will allow the Department to go through a rulemaking process, during which there will be a 60-day public comment period.